Only problem with cases that have front covers is it could be problematic for airflow. There are some cases that do well and other's that fail. One particular case that I was interested because of it's bling factor and a 1/2 was one of the worst internal airflow cases out there. I thought about purchasing the case as a 2nd or 3rd rig that I'll barely use but to just look at it but the reviews pushed me away from it unfortunately. lol

very true Jack, doors are also really hard to make look good lol. combining good looks with good flow is almost impossible it seems! similarly the popularity of full tempered glass fronts and sides has the same problem. to often ive seen a beautiful tempered glass case ruined by lack of airflow through the front and where the sides meet the front. rather than add 1/2in all around or just the sides they almost close the front end completely. i wont mention any names but there were a couple i wouldnt have been able to fight the urge if not for poor airflow.

waiting for some wcing gear to finalize the dukase build. i havent forgotten i promise!
Last edited: Dec 22, 2017
OP

Thanks Maxfly but we already have a dedicated thread for good internet deals.

No worries. I have built in a few Rosewill cases and they are very good quality for the price. I'm sure the Rosewill Rise is no exception.

ok so im pretty much done installing everything in the deepcool dukase white i bought for the back up rig. sorry it took so long, details details.
a big reason i bought it was so i could install my br drive in it. well that didnt work out. i tossed the ddc pumps idea. they were to old and it was just to tight a fit AND i had a brand new ddc die on me, again. i ended up going with a ek d5 dualbay res instead. sadly it left no room for the br drive(until i cut the floppy bay out). the loop i installed is a cpu/gpu loop with a ek pe240 rad. i had to use a TON of tubing to route everything because of the rad placement and the bay res. as well as the gpu block. it is an old apogee xt cpu block that i converted. it cools great but because the barbs come out pointing straight down i had to really loop the tubing around. definitely not ideal. hard tubing would have been ideal in this case. the end result is that i really crammed alot of tubing into it which makes it look much smaller than it really is. at some point ill go hard tubing and clean this mess up.
i nearly forgot to mention. with the top and front panels removed temps are roughly 10c better. airflow is majorly improved for obvious reasons. the drawback is the case looks awful with the black panels removed! a good compromise is to open the front door then remove the easy to remove top panel when gaming/benching.
if your going to install a small loop or stick with an aio.

NOTE: the rad im using is 38mm and the 25mm fans for a total of 63mm forced me to have to cut the mb heatsink. the heatsink hangs over the edge of the mb pcb by at least 8-10mms. so keep that in mind if yours is the same way. anything below a 35mm rad with 25mm fans will probably be fine but you may have to use 15mm fans to get by. the paint job is very nicely done. it doesnt scratch or scuff easily at all. i built and rebuilt the loop 3 or 4 times during the test phase and the only mark on the case is from the black rubber feet on the ddc pump i tried to use. the build quality really is well done. this little tank is well worth the money!

Thanks for the update Maxfly. It doesn't look horrible. I think the tubing issue is simply the result of re-using older parts and there is absolutely nothing wrong with that but it does limit your options. I have the EKWB D5 REVO res/pump combo and love it. You should have no issues with this one.

Getting a 10°C drop with the side cover off is not very good. I would definitely look into additional intake fans or a higher CFM intake if you cant add a second fan up front.

bit of an update. im going to redo the loop with hardline. this will be my first time(going to start another thread for advice). i just cant have the tubing looking like it does dangit! im also going to pull the ek res and reuse my ddcs in serial. not that the d5 isnt doing its job by any means. id just like to keep it for a backup for my main rig. ive got it into my fool head that im going to replace the pcbs on the ddcs and rewire them. i found a couple of places that have brand new pcbs and they are cheap. so i figured wth. just have to find my friggin soldering iron and gear bleh. our man Corpsejockey hooked me up with a xspc ddc 5.25 bay res that im going to TRY to fit in front bottom...sideways! the only problem is i wont be able to mod the front of the psu shroud to fit another 240 rad and fans i do have room under the gpu for the bayres but i dont know if that will leave any room to fill it. anyhow, what do you guys think i should do? cut the shroud and add a rad or just leave it and put the bayres there?
OP

If you recently purchased a case and love it. Let me know so I can add it to our list.

Yep, that ones on the list. Thank you.
W

Kolink Rocket ... expensive and there are elements which could be still improved but for some users it will be really worth it, there is no better case in this size. Enough to build small and good looking gaming PC.
I was actually planning to build something like this myself for maybe 3 years but never had time and I recently bought one. Inside runs [email protected] 1.1V, Cryorig C7Cu, 16GB TridentZ [email protected], EVGA GTX1060 SC ITX, Samsung 970 Evo and Corsair 450W SFX.

I have been using the fractal design Define R5 since I reviewed it April 13, 2015https://www.overclockers.com/fractal-design-define-r5-case-review/, I have been using it. The case has a bottom filter that pulls out from the front (I never have to remove it from its cubbhole. I hear the R6 is pretty good, too.
OP

Thanks for the input Gentleman. Ed I do have the R5 listed and I believe I even linked your review in it. Bart I'll see what I can find on the Kolink Rocket and add it to the list.

There was nothing new for a while and I just replaced one more ITX case because needed something for larger Noctua cooler but still as small as possible and I found Raijintek Metis Plus. Probably the smallest ITX case with space for a 160mm CPU cooler. So far everything fits perfectly and it was quite cheap. There are newer cases but don't support more than ~130mm coolers.
Here is the link:
https://www.raijintek.com/en/products_detail.php?ProductID=54

So far all seems great but if I have some additional comments then I will add to this thread.
Even if not the top choice then for sure interesting product if anyone is looking for a small ITX case that still has space for the larger cooler.

Edit:
- there is not much space for the PSU so I recommend to get a SFX PSU + ATX to SFX bracket, also, SFX PSUs have much shorter cables what saves a lot of space
- can install DTX motherboard and there is a space for 2 slot graphics card and some more, ~3 slot space or 2 slot +fan on top
Last edited: Oct 4, 2019

If I could make a small correction, the Crystal 570X RGB does NOT have a reset button like this listing shows

Oh, and I highly recommend this case! Cable management is decent, plenty of space, and it looks damn sexy---even without any RGB lighting. 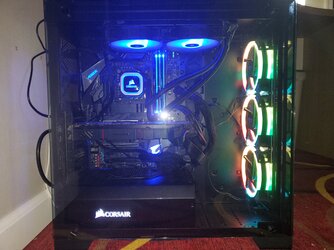 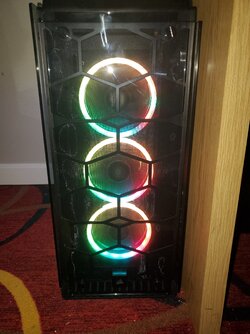 HeatM1ser2k4 said:
If I could make a small correction, the Crystal 570X RGB does NOT have a reset button like this listing shows
Click to expand...

I have a few cases I need to add to this list and I'm hoping to update soon. Sorry for the long delay. Life happens.

Be Quiet! Dark Base Pro 900: I bought one of and then set up a return with Amazon and dropped it back off at a UPS store the same day it arrived. Instead of a standard PSU bracket, it has a non-removable (without cutting the case apart and obviously voiding warranty) plate and little plug extender, so it will not work with C13 plugs unless you can cram an adapter in between the PSU and the back of the case. Not a good case if you're thinking about actually filling a full tower with hardware and a 1500W+ PSU. Unfortunately they don't seem to effectively advertise that.

Corsair 900D: Have had it for 6 years as of a few days ago. Was nice when brand new. Became annoying within a short time frame. Hinges and springs are cheap and wore out very quickly so I now keep it squeezed between a wall and a power conditioner so the side panels don't fall off. The included fans are somehow brittle and two of the front fans had a blade just snap off randomly while they were spinning.
Last edited: Jun 29, 2020

Thats some bad luck man. Live and learn i guess. I appreciate you sharing your experiences.
I nearly forgot to mention i won a montech flyer 400 over at TPU! Granted its a cheapy but still a decent case. Swapped by backup rig into it and was really impressed with the airflow. The only real drawbacks were the lack of space between the side of the cpu heatsink(noctua nhu 12s chromax.black) and the top of the case. No room for fans. Not that its needed with the front and rear fans. I went with some noctua chromax 1700rpm fans on a gentle curve and temps are very good. The other draw back is with most mbs the heatsink literally hits the side of the rear fan. Using a msi z370 gaming pro carbon wifi ac the sink is smack up against the side of the rear fan. Ive got a asrock z390 phantom gaming 9 mb im going to swap in but it doesnt look promising as the sink is just as big from the looks of it. Other than that, its a solid little aircooling case.
You must log in or register to reply here.