This is the first time I have overclocked my home built PC. I have been building them for over 20 years and only now I get round to overclocking. I have done a CPU multiplier OC with good results, stable @4.6Ghz and CPU 1.356v from 1.32v, but I get what I think is a rogue temp that HWMonitor says is my CPU, I stopped pushing OC after temp got to 69C. My CPU temp in speedfan, corsair link and Open Hardware Monitor say otherwise, they all correlate to the same reading, which is the CPU is 55C.

My question is therefore, what is this Temp 1 and why is it so much hotter than the rest of temp readings. Speedfan reports it as - Temp 1, HWM - CPU, Corsair link - MB Temp 1, Open Hardware Monitor - Temp 1.

Temps as far as I can work out,

OK, thats the not so wierd bit out of the way as Im sure there will be a reasonable explanation for the rogue Temp.

There is 4x ~150mm fans under the control of speedfan and linked to the rogue temp. As well as the 2 fans from H100i and 2x ~75mm side fans. The Latter 2 sets of fans were disabled physically and the 4x 1500mm chassis fans were disabled with speefan. As all the fans powered down visually as well as audible, I noticed the rogue fan was still at the same RPM ~2300. All fans stopped, but as far as all the monitor programs were concerned there was a fan spinning, still @~2300.

I am aware that the RPM of the rogue fan is very close to the RPM of the H100i pump but I have spent the better half of tonight studying them and I cannot say that they are the same reading or not, my best guess is they are not but my better judgement says they have to be.

I appreciate any input here as I would like to push this CPU further as my OCing came to an abrupt stop as Im a bit old school, 70C is not a place you want to be, but I am aware that this is subjective but nonetheless I would still like it to be cooler if possible.

Thanks for taking the time to read.
OP
M 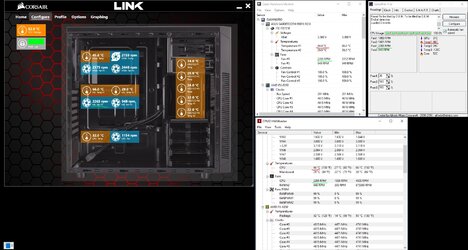 RedLines marking the Temperatures and the GreenLines the fans. I didnt push the temperature as high as first stated above but just trying to show what I mean as reading it back, it seems a bit confusing even to me. Hope this helps to make things clearer.

Speedfan>? I had no idea that still works with modern hardware. I stopped using it in like 2008 and it sucked then. LOL!

What does Realtemp say the temperature is? I would go with that or the other software. Since you have no idea what Temp1 is and have a CPU temp, I would imagine its not CPU temp....thinking logically.
OP
M

RealTemp as far as Im aware is for Intel CPU only, and I dont think I need another program to confuse matters further. I may install AI Suite if I can be convinced that it would be better but my experience is that its not that great and never really used it. As it was completely counterintuitive for me to install a liquid cooler, therefore I tested all my temps with an infra red temp gun and they both agreed, I do trust corsair link.

I think you are correct in that the Temp is not the CPU but everywhere I read that HWM is one of the best and its the one that is throwing the CPU into question or doubt. My thinking is that it may be the socket Temp but even then I think that it would be too high even for that.

If it is the VRM, would that temperature be classed as ok or normal, as the VRM temp is not something that I have 'watched' in the past, but I do realise that I am now out of my depth and appreciate your input.

Oops...coretemp.
You must log in or register to reply here.

Did you remove your rear PCI cover plates for airflow?