I thought i would make a thread to see what hodge podge repairs people have done to their system while the zombie apocalypse was going on ...

I'm going to start mine off with a video because thats really only how i can convey the weirdness about it.

So the day after everything locked down i came home to blast some baddies and turn my system on only to find it that it threw a rod through the block...

only of course this isnt an engine obviously.
Its an RTX 2070 i bought used with a remaining manufacturer warranty still yet i dont know how long an RMA on something like this is going to take, things just closed down for the few months so i went looking for a temporary fix.

I came across the NZXT/Asetek watercooler adapter bracket i used on my 1080 that died and test fit the fan with it and found it was a good fit, and i had a 4pin vga fan to standard fan adapter to go with it, out comes the zipties and i wound up with this: 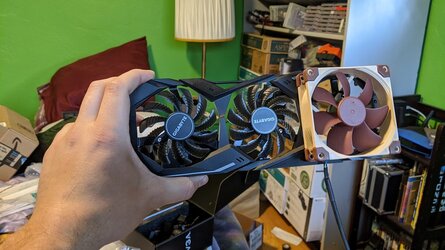 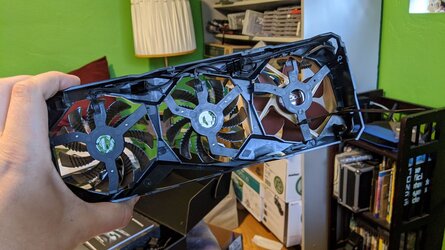 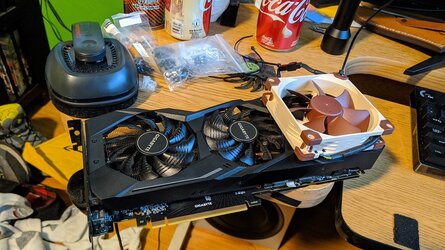 yes only one ziptie but it works and its out of the way of the blades, re applied some thermal paste with some REALLY thick AS5 because thats all i had around jammed it in the computer started it up.
my temps dropped dramatically, i was getting high 70C on the stock cooler before the fan went bad and the thermal paste applied before i took it apart was still good. After replacing the fan with the noctua it dropped about 15C to about mid 60's depending on how hot it was. was pretty proud considering it only took me about 45 minutes to swap it out.

So i thought about it for a while, and started gathering some spares while most places were still locked down for more just in case things, little things 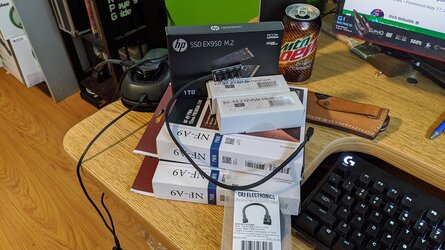 shout out to Rich there of the Rebuilder variety, not pictured is the big *** tube of Kryonaut.
I gethered this stuff over the two months after the rona lockdown, the 1TB was not an impulse buy, i ran out of space on the gaming drive (friggin warzone and its huge install size)

After a recent email from gigabyte that didnt instill much confidence in an RMA still (even for just a new fan set) i decided to make my temporary fix more permanent a few days ago... 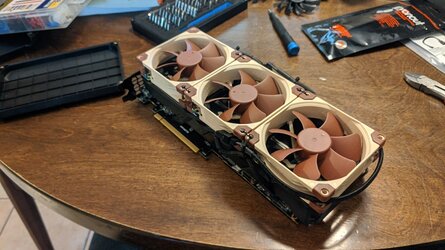 missing some more pics of the install process but you get the idea. Its so much quieter and i am using afterburner to crank the fans to 100% all the time. My temps with the Kryo and the 3 Noctua 92mm fans have been in the high 40's mid 50'c depending on how hot it is out. its currently over 100F outside and our AC is having a hard time keeping up and i saw a peak of 57C in game earlier before starting this thread.

Any one else have any thing to add that they have had to do to their systems during these crappy times?

If one Noctua fan improves the cooling two more should be that much betterer. I'm sure they have a lot more static pressure than the stock fans.

Interesting, I have a RX570 with a loud fan... might have to do this. Good idea
You must log in or register to reply here.