Rust in a cpu block?

So I was doing some playing around with the system in sig, just spring cleaning really, wanted to make sure it was ready for the colder weather coming up and there wasn't any build up of material in the CPU block again. Turns out I did have a slight blockage in the CPU block, it seems to be the only block with fins finely spaced enough to trap anything, I guess it acts like a filter, but this is what I see when I tear the loop down and pull the CPU block out open it up. 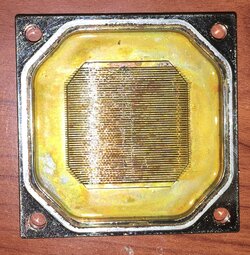 Now before we all points fingers at the liquid in the loop, it's just distilled water with a couple of Monsoon Silver bullets. So the search is on to find out what in the world could be causing rust in the system, also there is no residue on tubing, nor in the GPU blocks (no pictures of those since naked blocks would probably be banned in the forum. So I think I found the culprit, in what I would of thought an impossible place, the pump. 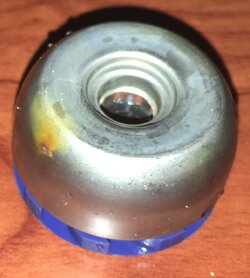 As it turns out if there is a leak in what looks like a Bundt Pan, water can get inside and interact with the magnets, and we all know what's in magnets right? So that pump being close to two years old, and me breaking the warranty sticker on it, think I have any recourse for warranty work?


On a slightly different note, but dealing with water pumps, I have noticed recently that the pumps don't wish to turn on, neither of them, if it were just one I might of thought it was that pump wanting to go bad, but both of them at the same time I think it might be rust related and having made parts of the ceramic bearing or the plastic the impellor sit on rough and causing enough friction to keep them from rotating, I know that when I gave them a whack they would start. Has anyone heard of this, or had similar experience, anything I can do to resolve this? I got two new pumps so if it's just running distilled water is the culprit or it was the fact there was a weak spot in that one pump which caused premature failure, sticking with distilled would still be recommended.

Anyways, proof that no matter how hard you work at making sure there is nothing in your loop and you are running the simplest of solutions, you will run into problems when you add Time to anything.

Wow. First time I've ever seen anything like that.

After years of distilled water, silver kill coils and some deadwater, I've decided to move on from oxidization which I believe is what I'm possibly seeing in your case but in different colors, mine was black, to premix clear fluid from Aquacomputer. I think I'm done recommending distilled water from my experience as it will eventually be a pain down the road and all the reputed H20 mfgers recommend as so even though I used it for years, since the beginning of time on my end as the pumps and most of the hardware look good as new but some of the fittings and blocks always showed a sign of rust/oxidization.

I'm not changing my method at all. Water is still the best thermal conductor and Copper Sulfate takes care of any growth. Proper maintenance is critical, plus you can't guaranty the purity or integrity of any manufacturers materials that they use in their blocks or fittings. You are at their mercy no matter what you do. I will continue to use what's worked for me for better than a decade.
OP

Not sure what caused the discoloration, but it led me to the hole in the pump impellor, which I'm sure isn't a good thing, that and the fact both pumps stopped starting up like they used to is an indicator that water alone isn't the best route. It might be if the pump hasn't let rust into the loop and I think it was what caused the friction, to seize the pumps. If your familiar with the DDC pump, the impellor rests on that ceramic ball, that thing is slick as snot, but the plastic divot that the is inside the center of the impellor looks rough, I will try and get a better shot if I can. I am guessing that the rust acted as an abrasive and wore down the surface that rests on the ceramic ball to the point it was rough enough to cause friction, and after a period of time it caused enough friction that it wouldn't start up. Once I got it running it would stay running, but if I took it to a slow enough speed it would lock up.

I sort of doubt there was anything I could do to stop this from happening, I mean stainless steal with rust stains on it, seems to me that there was a defect in that part of the pump and it just finally wore through and did it's damage. This would make sense why both pumps were acting the same and the same issues.

Time to reinstall everything and rinse the loop out several times, the only downfall to having such a huge loop, it take a lot of water to rinse the whole thing out.

Edit: Mr. Scott your too right, I don't disagree that distilled, demineralized, de0ionized water is the best bet, just wandering if there was anything else I could of done to mitigate this from happening? I don't test for pH in the water, but other than that, I drain it regularly since it's just distilled water, its cheap, like $1.5gal maybe.
Last edited: Oct 7, 2016

Personally, I think you just got a couple crappy pumps. QC is not what it once was. I run nothing but DDC pumps and have a few almost 10 years old still working.

Rust? Don't think so. You know what rust is? Vs corrosion? Think you need to understand the technical terms.

You didn't even post a pic of the CPU block rinsed out. Not a lot of help.

Wonder, just for giggles, did you leave the PC turned off for a long time?
OP

Conumdrum said:
Rust? Don't think so. You know what rust is? Vs corrosion? Think you need to understand the technical terms.

You didn't even post a pic of the CPU block rinsed out. Not a lot of help.

Wonder, just for giggles, did you leave the PC turned off for a long time?
Click to expand...

I guess I might not know the difference, but sure does look like rust on the pump, and if there is rust on the pump it makes sense that it might deposit itself on the cpu block, I could be wrong and probably am after reading your comment, lol.

Not sure how posting a picture of a cleaned cpu block would help, but I'll tear it down again take one if you think that will really solve anything. It didn't come clean with just a rinsing, scrubbed it with an old toothbrush and soap and that didn't work either, had to put it in a sonic cleaner to get it cleaned up nicely. It was a pretty bad nickel plating job, there is more copper than nickel in the fins of the block.

As for sitting, Once the temp at home got warmer I would turn it off while I was out of town working, so over the past 6 months it would be off for a couple of weeks and then it was back on again. Would it sitting have caused the pump to go bad?

Dorothy forgot to oil it.
OP

Scarecrows' fault, if he only had a brain!

The pump is a bit troublesome, but I bet you have corrosion on the block. It isn't rust and a bit of ketchup over 12 hours might do the trick. Please post pics of the block after a basic clean and after a bit of acid cleaning. I still wonder if the PC was left off for a long time. Please tell us..

From his post:
I guess I might not know the difference, but sure does look like rust on the pump, and if there is rust on the pump it makes sense that it might deposit itself on the cpu block, I could be wrong and probably am after reading your comment, lol.

Rust on the block can't happen. That is copper. It don't rust Iron rusts, not copper.. Wrong term. Corrosion yes. My blocks had it. Please see my sticky posts. The reason I mention long term issues the bit of rust on a steel part (not cheap steel, maybe close to stainless, could be stainless that does rust). Did you leave the rig off for a long time? I bet. That spot isn't a daily run rust spot. It's from sitting there for a long while...IMHO.
Last edited: Oct 8, 2016

t1nm4n said:
As for sitting, Once the temp at home got warmer I would turn it off while I was out of town working, so over the past 6 months it would be off for a couple of weeks and then it was back on again. Would it sitting have caused the pump to go bad?
Click to expand...

It looks like it would sit for periods of time unused Conumdrum.

you might think about automotive antifreeze, about 10% will be plenty, has lubes for bearings, anti corrosives, conditioners for rubber seals and if you want to run clear get zerex HOAT, it's gold.

Have you checked your Monsoon Silver bullets? Ive read that after awhile they literally rust because of the metal beneath the "silver" coating starts to tear away...you might want to look at that.

I assume you have a Nickel plated cpu block correct? It does look like nickel underneath the yellow "stuff". If that's the case it is not recommended to use distilled water + silver with nickel plated blocks.
You must log in or register to reply here.