Sure has been a long time since I posted or visited Overclockers. Doubt anyone will remember me. None the less, thought it would be fun to play with an RX 470. If this is posted in the wrong area then mods please do move it. Though I have not been active on any site I have none the less still been playing around with modding. The present computer (bad pic but the phone camera and I have an ongoing battle). 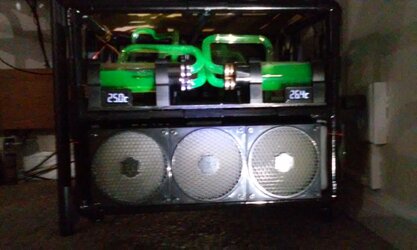 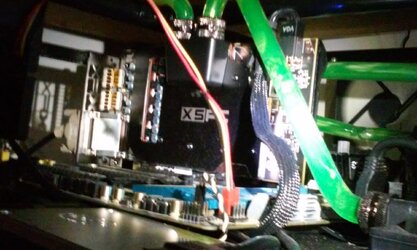 Well, we shall see if the pics attach. At any rate, started with an XFX black rx470 (six pin power). Took the heatsink off and found SKhynix ram. Interestingly the ram had no heatsinks, either on them or incorporated in the gpu heatsink. Took the XSPC heatsink which I was told would not work, modded it so that it works for both the gpu and the memory.

The computer is a 5820k at 4.5 ghz with 32 gig of ddr2800 mem at ddr3000 with fairly tight timings, 950 pro, dual ssds and a blue for back up. One 360 rad cools the RX470 while two 360s cool the CPU (which is a stubborn overclocker). Both are on seperate cooling loops in a custom pvc case. The original intent was to see if we could get the RX470 as a single gpu to score 12,000 in Firestrike. BTW, my son got the 980 ti I had in it and is very happy with it. At any rate as of today I have fallen a little short though I am closing in on it. I have found that the vid card will attempt to pull the power I set it at as this has resulted in the radeon settings being lost and the computer rebooting to a bios screen. This indicated to me that power was attempting to deliver to the vid card while denying the system. To compensate I overvolted a tad more on system settings to account for this droop. The vid card never has exceeded 50c under heavy overclocking. No electric mods have been made to the vid card.

BTW, the physics and combined will show the falling score before failure when the card is pulling too much power.

Links would be nice however if you check 3dmark you will find scores posted as well as invalid scores (which should become valid as soon as the newest driver is certified). Scores are listed under my email name d_hamel_2000.

Hopefully this answers some questions regarding water cooling an RX 470 as well as the results one might expect. Take Care All.

Looks like a fun build! Glad to see a Senior pop back in, going to add your Decennial badge now

Always a pleasure to see original seniors pop back in if just for a moment.

Hi and wow this system is looking really really good ! I'm thinking of buying a sapphire rx 470nitro+ 8gb as an upgrade from dated r9 270x and was just wondering how happy are you with your rx 470 ?
You must log in or register to reply here.