Welp, overclocking the 5800X the old fashioned way (multi+voltage) wasn't the best idea, and I learned that the hard way

Every once in a while I would get instability or a crash. So with a little help I found out how to properly use the PBO and Curve Optimizer. Once I learned that, it was easy as pie to get my chip to boost to 5050Mhz and temps never passed 55c while gaming for hours.

To be sure I did it right, I ran P95, then I ran Vray & 3dmarks Cpu bench. Rock steady stable and no crashes

I also noticed the rig's overall performance has doubled. I was quite impressed and surprised on how easy it was to overclock it the right way. Last night while gaming with Jeff (Stereo55) I was trying to get a screenshot to show RivaTuner, but every time I did I couldn't find the dang screeshots! Best I could do was take a pic with the phone

Thanks Joe! Yeah, it was confusing at first and I didn't understand how PBO and Curve Optimizer worked, but once it was simplified to me, then it was easy to follow. Adjusting PBO and Curve and testing was fun. Of course taking notes ( alot of notes! lol!), rebooting, testing I understood more or less how it worked. It's just as easy as the old way because you're only adjusting a few settings and voila!

Truth be told I was gonna give up the 5800X build and try Intel, but I'm glad I stuck it out. AMD has a remarkable chip and overclocking it properly the performance gains are insane!

There are gains, but double anything from a couple hundred MHz feels impossible, lol!
OP

EarthDog said:
There are gains, but double anything from a couple hundred MHz feels impossible, lol!
Click to expand...

Yeah I know, but you know what I mean!

I agree with you hombre, love my Ryzen CPU'S! I have a 5600X and 5900X. Those new future Ryzens should be awesome too.. but I will probably rock my current rig for 2-3 years. By that time DDR5 should be awesome.. maybe.. hopefully.
W

freeagent said:
I agree with you hombre, love my Ryzen CPU'S! I have a 5600X and 5900X. Those new future Ryzens should be awesome too.. but I will probably rock my current rig for 2-3 years. By that time DDR5 should be awesome.. maybe.. hopefully.
Click to expand...

Somehow I liked previous Ryzens or APUs more (like 3900X, 1920X, or 4650G) ... maybe because I had no luck with the 5000 series. 5600X/5800X were hot, not overclocking at all, and had weak IMC. I also had some chips with faulty IMC. 5900X was just right, but I feel it degraded, and in the last few days, I had some weird problems with 00 or 5A errors when it was installed on Crosshair VIII Impact. For some reason, no issues like that on Strix B550I Gaming, and the Impact is fine with 5700G, which arrived today, so I don't know what it is all about. So it's just my point of view which most users won't share ... and I'm glad that those who have fun actually share that

Maybe I just expect too much but I wait for the next-gen and will probably sell the 5900X in the next 2-3 months. I will keep the 5700G, which just arrived. It looks like a nice chip. Low power, low heat, high IMC/IF ratio, so I guess I will have some fun soon, but first I have to test 2 memory kits that are waiting for 2 weeks.

I thought my old 3600XT was pretty decent, I only bought the 5600 because that's what my system was supposed to have, but was unavailable at the time. I love my 5600X, its a heck of a lot more fun to play with than my 5900. I am only using the 5900 because it has a higher single core boost, and it handles 4 sticks better than m y 5600. Silicon quality is very inconsistent with AMD. My 5600 is a unicorn, where 5900 is just average I guess. Can be a bit finicky if things aren't just right. I too thought I degraded my 5900, was having all kinds of issues.. turns out was just my fan controller shorting, and doing all kinds of weird ****. Settings that were stable were not anymore. I even set up an RMA with AMD. Luckily I took the time to dig. I listed my 5900 a couple of times already, had lots of interest, lots of low ballers, and a couple of no show's. People want this stuff for free lol. When the time is right I will build another Intel system, probably when DDR5 is out, maybe AMD.. well see. The latest UEFI is pretty decent. I am not sure how long I was using a variety of beta bios, but seems like about 6 months or so.

I do know what you mean, I expect to much too.
OP

Funny how both of you guys mention the issues with the 5900(X). Jeff (Stereo55) has been having major issues with his 5900X. He has the same board, but any little overclock just makes it go all wonky with crashes/reboots. He's swapped out memory, psu and video card. It has a mind of it's own and he's quite fustrated with it. He does have a brand new 3900X, but he's reluctant to crack it open just to test.

I told him to send the 5900X to me and I'll test it on my rig so we can rule out the board or the chip which are to 2 last components.
W

My 5900X started as a chip that could make 3866 1:1 with almost any RAM and up to 5200 1:2. Now it can't make anything above 3733 1:1 or 5000 1:2. Besides that, it had these weird issues on the Impact mobo while on the Strix it works without problems.
I was trying to sell it but here, people want everything for 50% store price or make weird problems. In the last year, I had no problems selling used stuff. This year I can barely sell anything at a reasonable price. Besides items for mining, everything else was going for 50-60% store price. Because of 23% VAT and expensive shipping, my prices wouldn't be good for guys from the US/Canada so I'm not setting anything on classifieds.

Edit:
I was wrong. Crosshair VIII Impact sets too low voltages under auto and in the main window, not all are available like on B550 motherboards so I missed something. 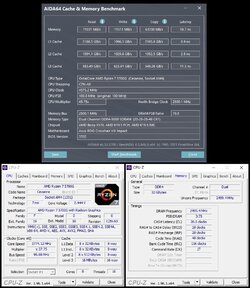 My issues were from a short I think, she's been running good for 98% I have had it. If your buddy is jumping through hoops like that, set up an RMA.. I would. Is he using the latest bios?
OP

freeagent said:
My issues were from a short I think, she's been running good for 98% I have had it. If your buddy is jumping through hoops like that, set up an RMA.. I would. Is he using the latest bios?
Click to expand...

Yeah, same bios version as me (v1.70). He's started an RMA with AMD. He's also read on AMD's forums a whole slew of others with the same (or worse) issues with the 5900X/5950X chips. It seems they have let out a bad batch slip through the cracks and out to the public.

We couldn't figure out why his rig was causing so many issues, but at least on AMD's forums he's not alone. He's going to crack open the 3900X and use that until he gets a replacement 5900X. Unsure what decision he's goingh to make as far as using the replacement 5900X or continue to run the 3900X.

Will keep this updated.

I was surprised it went so high at 1:1. It was supposed to be about the same as the Ryzen 4000, but clearly, something has changed. 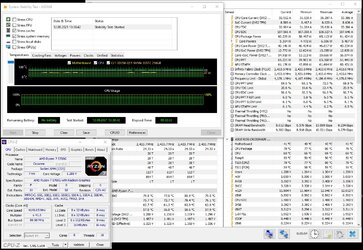 Weird is that it shows 4866. I will rerun it with a different memory kit in some time.

That is serious business buddy! Nice one!
You must log in or register to reply here.