So I am planning a Ryzen build for my office as using my laptop as a primary out there is just not working for me anymore.

I have decided that I am not going to beat on this system as its for business and TBH doesn't need too much horsepower given that my T9600 laptop is currently serving that purpose fairly well. I have also decided I want to a primarily white theme.

This is the case I have selected 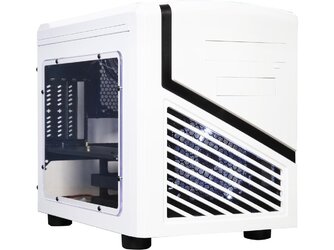 I am going to try to reuse as much gear that I already own as possible for the time being.

Now things to take notice of here is that it is MATX and has a sideways mounted motherboard tray.

As the 1600X does not have a cooler I will have to purchase one.
The GPU already has a WB installed which is the only reason I am considering liquid cooling.
I see at least 2x 120 maybe 3x 120 worth of radiator space in the case with light modding.

Its been several years, but if I recall correctly the stock GPU cooler for this card was rather annoying when playing games, so I definitely want to avoid that.

My thoughts are since it wont be overclocked maybe I could get away with CPU + GPU on 2x 120 worth of radiator without it sounding like a jet engine.
Now that may be pushing it and it seems like setting up a GPU only loop would be a waste of time?

If I were to go with straight air cooling can anyone recommend a replacement GPU cooler for this card that is nice and quiet?

Build is probably another month away at least so mostly looking for opinions here. Also anyone know of a MATX b350 or x370 board in white? Newegg had one a few weeks ago, but I dont see it anymore.