I'm getting ready to build a custom water cooling loop, and as part of that I bought some liquid metal to apply to my GPU and its water block. I've read dozens of posts that suggest using nail polish to protect the area around the die from leakage, but there's such a large variety of those that I got worried I'd make the wrong choice for which to use. Then I read about conformal coating. That sounded like a better bet, so I bought some. Specifically I bought MG Chemicals 422C Silicone Conformal Coating (even more specifically, I have one of the little glass vials from the center of this image).

After placing that order I did more reading and found conflicting information about whether or not silicone conformal coating is appropriate for this - some threads suggested acrylic instead. So now I'm questioning my choices.

Eventually I found yet another thread that suggested using Kapton Tape, so I ordered a four-pack of that, too.

I know liquid metal is over-the-top. I know I could just use thermal paste instead. I'm pretty sure I want to try anyway. But before I do, I'm hoping that someone here could reassure me that one of the two things I've ordered will help prevent me from ruining my graphics card (or point me to a very specific alternative to use instead).

So....I'm pretty sure if you apply it properly you don't have to worry. I've use liquid metal vertically without issue and without other mitigation methods.

LM doesn't tend to drip unless you apply an excessive amount. The only reason to use nail polish (and you need to use the right kind) is if you have any surface mount devices on the chip package that could be shorted. If not, don't worry about it.

I would also note that I don't think it's worth using on a GPU since the power densities are lower than a CPU. If you're not running into thermal throttling, then LM isn't going to provide much benefit. Since you're planning on using an insane radiator setup in your other threads, that will be of more benefit to your GPU temps than LM.
OP

Alright, I appreciate the confidence boost! Here goes nothing...
OP

Hope this looks good! I won't find out until next time I boot. 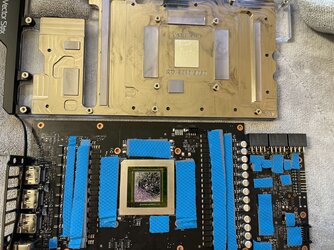 I hope you took off the blue protective tape on the thermal pads!! I also think you over padded Many of those smaller ones by the power connectors and below wont make contact with anything.
OP

EarthDog said:
I hope you took off the blue protective tape on the thermal pads!! I also think you over padded Many of those smaller ones by the power connectors and below wont make contact with anything.
Click to expand...

Yep, I took the blue tape off. I just put the thermal pads where the instructions told me to. It did feel like a lot though! If I don't need to cut thermal pads for awhile I'll be OK with that.

If the instructions said so, then it's so, lol!

EarthDog said:
So....I'm pretty sure if you apply it properly you don't have to worry. I've use liquid metal vertically without issue and without other mitigation methods.
Click to expand...

Same here took water block off cpu and it has LM on no dripping no nail polish . I did put it around a delidded cpu as it had things very close to die (very technical term had things lol)
Nice pic lots of pads
You must log in or register to reply here.

I had no idea that Thermal Paste was so competitive.

R
Can Liquid Metal be used on 100% Copper IHS/Heatsinks?