I will try and keep this as short as possible, I have put three tenative builds bellow each with a different specs but with relatively the same goal in mind:

The Goal.
Recently I have sold my main gaming rig as well as my laptop and decided that it is time for me to move onto something new and focus on my career in the Information Technology world. I want to learn more about hosting and managing a small to large infrastructure simply because my current job and most of my previous jobs have not given me that opportunity and those that have... well my contracts came to an end due to outsourcing to India or other parts of the world hence it cut my flow of knowledge.

I know that this will not count on my resume as work experience but it will give me a step forward in the right direction to assist smaller companies or non profit organizations build and manage their networks and from there I can build my own name in a more administrative field. That is the goal.

What I'm aware of:
I do know that I could pretty much do this whole idea on one pc using a VMware and learn from that though I also like the physical aspect of things as well. I also feel that any investment would be a good investment in that regards as I can re-use either of the machines for other uses such as photo or video editing and I can probably lend it out to some people I know which do a lot of rendering but don't have as much money to invest in a workstation.

What I would like to know:
1. Which OS to pick? - Keep in mind that I have no previous linux/unix experience and that most clients launched or hosted from the machine will require a windows based OS, I may build a firewall using smooth wall and learn linux in the future.

2. Dual Xeon vs Core i5 - Will a normal OS such as Windows 7 Pro or Ultimate utilized both Xeon Processors and is there really a benefit to having, say two separate i5 Systems?
Other:
What are your opinions on buying a switch/router with a firewall vs building your own?
what are your opinions on NIC teaming? is it worth the effort?

I know that the third build option is pretty unconventional and it would not be to host any modern games, that I can assure you. Each system would be loaded with 4GB of ram and would host old retro servers for games such as: King Arthurs Gold. Terraria, Quake/Quake 2, Quake: Team Fortress, Nox (Nox Quest) as well as a slew of much older games. If things don't turn out as intended then I would simply take them all run them asa cluster for some [email protected] for you guys at OCForums or explore some other ideas concerning running a small business (probably not an option though; getting a retro game / internet cafe would be nice but I have a lot of reading up to do for that and would need to look into zoneing laws and stuff).

The connection leading into the houses is a 25mb down / 10mb up and would be dedicated to the server only (ADSL 2+), I would use a 3mb down / 1mb up (cable) I also verified with the ISP's user agreements and there is nothing against hosting a server on their lines and there is no mention of a bandwidth limite.

I would suggest building the servers to what you expect to use them for. For example, no reason to give it that much processing power if you won't use it. If you want to get into the server side, I would suggest getting multiple systems instead of one big one that does everything. This way, you can work on distributing load depending on how powerful the system is or for the programs you are running.

2) Again, it depends on what you are trying to do here. I would shy away from a super powerful system, due to high cost and what I mentioned earlier.

Have you checked out actual rack-mount server hardware? The systems will be better for what you are doing: they can take more disk, more RAM, more processors. They also fit in a rack very nicely. If you want to read on what I've done, check out my thread here.

I'd be happy to answer any questions you have regarding this as you are in the exact same situation I was a few years ago. I have no formal training/classes on anything computers, and certainly not when it comes to server setups. I just do a ton of research, tinkering, and hardware gathering.
OP

You are right in the sense that at this time I don't know how much processing power will be needed and I think that getting a Xeon setup would be over kill and or might not be utilized properly, I re-thought things through and have been looking around to see if there are less expensive work arounds such as getting a lot of older Core 2 Duo or other hardware to simply cut the cost and from there I can determine what power is needed then upgrade as time goes on.

I looked into rackmounted servers and they are interesting, one thing that I try to keep in mind is noise as the servers are running in the same room that I sleep in. I managed to get by pretty well in the past with using bigger fans with a lower RPM which still push a good amount of air, its harder to place something like that in a rack mount due to space though there is always the option of using some sound dampening foam... that stuff seems to work wonders... as for heat, no matter what I do everything will be exhausted directly outside.

If they are in the same room, I would avoid rackmounted equipment. They are made for reliability, which means low temperatures. I've never heard a quiet server. Granted, when I lived in an apartment, I had a stack of running servers right next to my bed, but I'm fairly crazy, so don't think that is the norm.

I've found that with a decent amount of processing power and a ton of RAM, you can run pretty much anything. On my main file server (Ruby, in the thread I linked earlier), I'm running two Windows 2008 instances (one as a domain controller, the other as an Exchange/MSSQL server), one Windows 7, two Windows XP, and a few random CentOS installs for screwing around with. I've given each more than enough RAM (the domain controller has 1gb and the other server has 4gb) and the host is sitting at a total of 12gb system RAM usage at ~6% CPU usage. This includes other tasks the server has been assigned, such as being a web server, samba server, VirtualBox host, and a CrashPlan server, to give a few examples. My bottleneck is actually the hard drives, most of the time.

Basically, what I'm saying is, get a decent processor, dump as much RAM as you can (reasonably) afford into it, give it good disks, and let it rip. 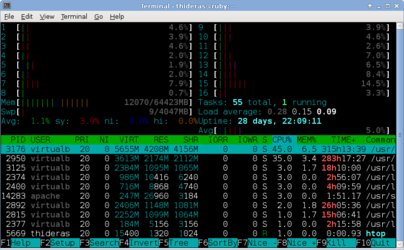 I went a totally different route but thought I'd throw it out there. Been running a home server for a few years...first WHS v1 now WHS 2011 (which iirc is based on Windows Small Business Server). Had a friend wire the house with cat6, got a 24 port Gb switch and connected every pc in the house to the server.

Use it primarily to store the movie, music, photos, etc, etc and am not running thin clients so storage matters more to me than maybe you. I'm running a (now) cheap dual-core (see specs in my sig) and it handles everything I throw at it without a hiccup (although, for some reason, the switch needs to be reset every month or so). Multiple HD streams (I've only tested up to 6 simultaneous) plus music on others (only tested with 4 simultaneous..so 10 streams tested total). Every pc on the network gets backed up nightly so can restore full o/s, drive contents, etc or indivual/multiple files. I use remote desktop to connect to the clients (saves me from walking upstairs...lazyass) for most issues. You can (I haven't, yet) set it up so that all windows updates are centralized (download once to the server then the server pushes out the updates to the clients). And on, and on (can you tell I like WHS? hehe).

That said...whs2011 does have it's drawbacks (like having to buy a 3rd party app to allow drive pooling) but all in all, as someone sang, it's been good to me so far. Also...saves most people from learning linux (myself included).

Just another option depending on what you really want to learn.
OP

@thideras
I see what you mean for both getting decent processing power and dumping as much ram as I can (reasonably) afford... because server ram is costly
I also would have been sleeping with a server rack beside my bed I think it's totally normal.

Other then that, I've come down the the conculsion of how much I want to spend and did a lot of looking around (better part of last night and about half the day today) looking at addtional all available options from new equipment to old servers off ebay. I said to myself, what can I get for about ~1600$ as that pretty much what I am ok with spending and would like to maximize both CPU Power / RAM. Currently since the project is only starting and I am not hosting an incredible amount of files or don't have a need for Terrabytes worth of storage I think that installing 60GB Sata 3, 6GB/s as the OS drive is best since they are fairly inexpensive and big enough.

Secondly I decided that I rather go with Linux (Ubunto Server) as it seems to be a fairly common distro and there is a good amount of information to find on it, I was tempted to agree with FUNSOUL as normally I would go down the windows road simpy because everything is there, Drivers are readily available and there is a lot of information on the internet but I decided that I should (despite not liking it because I am lazy) go with a more complicated route. The reason why is because either way I will need to work with virtulization and more so with linux even when it would not normally be required e.g. running a windows application though a virtual box.

I am still reading up on if my hardware will be compatible before purchasing anything and when I get this off the ground I will be sure to let you know and have a work log going.
Last edited: Sep 14, 2012
You must log in or register to reply here.