You guys have been benching all night, aight?

Woke up at 10:00AM (Spain time, GMT+1), decided to check the livestream about a couple horus ago and you guys were benching!

May be the replay?? I thought they quit 1AMish our time? (See chance's post above)

No idea, I didn't start any replay video, just pressed Play, thought it was live.

When Live it will have a red "LIVE" tag in the bottom of the window. Otherwise it is a replay. I think the overclocker stream runs a video anytime that it is not live.

They tried crossfire 7970 this morning, but something was going on with the system.

We ended up with 25L left over, which is all happy in my dewar.
OP

Thanks to everyone who came to hang out. Was good getting together.

Yup, we tried crossfire 7970's with me and Janus this morning, since TnB's stuff was still here and that would be a rare chance for him to get dual card submissions. We tested the chip ahead of time to make sure it was running good in the board at around 6GHz, and it was. By the time we dropped the 2nd card in and got crossfire running however, the system wasn't stable anymore - didn't like getting 1.7-1.75V and it was giving GPU driver errors, so we bailed and packed his stuff up. Could have been moisture on the board or our PSU config wasn't liking dual cards (we were using my 1000W on board and GPU, and beepbeep2's 850W on the 2nd card).

TnB has some saved submissions to make, he called when he got off his flight earlier and said he'd probably get to them in the next day or two. Nothing at the very top end, but several top 100 globals and improved team records on the 7970.

The 680 was a real pain. A lot of time and LN2 was spent trying to get that card to run right.

I spent a lot of time also on the 6.5GHz 3770K+7970 on the 2nd day, but had a bad time with the benches glitching and giving bogus scores. I was scoring 4200+ in heaven DX11, which wasn't legit (thats a world record by 500 points). 3D11 and 3D06 wouldn't run right either on that rig. Did get a decent 3D05 run in I think, but that was the only bench that wasn't wigging out at the time - struggled trying different things to get the other benches scoring right but it just didn't go anywhere. I think that was the last breath for my chip, its halting on the PCH post code now.

Burned through about 350L overall between the 4 of us - we put in a lot of work, but struggled all weekend getting the boards running well, chips running well, and GPUs running well all at the same time. The only time everything really came together on that front was on TnB's SB-E and 7970 runs.

I did spend a couple hours putting up this run for the team cup on the GPU I just got from Bobnova. It seems solid on core/shader, but will take more time and attention to see if the memory can go further - it was getting artifacts taking the mem clocks any further with increased or decreased voltage. With a couple hundred mhz more on the memory, it could put up some good scores.

EDIT: For future reference, things would have gone better if the cards were pretested, and we stuck to boards that we were very used to running on cold. A lot of time was spent finding stability with cold on the 7970's, and the 680 was just a disaster... When things were not working, with only having pretested CPUs, and OSes that weren't prepared ahead of time it made things more of a struggle than they probably would have been otherwise.

Also, I killed another z77 board - my monitor was having trouble with scaling when I first booted up the z77-gd65, so the bios and any message text was partially off the screen. I didn't realize it at the time but apparently the gd65 thought the bios was corrupt and it automatically starts flashing itself from secondary bios to recover the primary bios when that happens... The only thing on the screen was in bold red letters "TURN POWER OFF!. So I did. It wasn't until the board never turned back on after that when I realized the beginning of that sentence just cut off the left of my monitor screen ""DO NOT".

Also, I killed another z77 board - my monitor was having trouble with scaling when I first booted up the z77-gd65, so the bios and any message text was partially off the screen. I didn't realize it at the time but apparently the gd65 thought the bios was corrupt and it automatically starts flashing itself from secondary bios to recover the primary bios when that happens... The only thing on the screen was in bold red letters "TURN POWER OFF!. So I did. It wasn't until the board never turned back on after that when I realized the beginning of that sentence just cut off the left of my monitor screen ""DO
Click to expand...

MSI might be able to give you instructions too on how to initiate that recovery process again.

A couple submissions that I am finally getting around to posting: 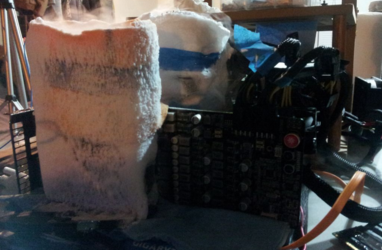 
Oh and a pic of the failed 7970 crossfire from the last day.

Had moisture somewhere or something that just made it incredibly unstable.
Last edited: Aug 7, 2012
OP

Here's a couple shots I grabbed... 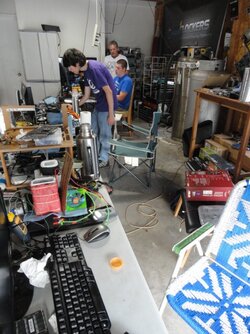 18ft of benching tables, completely covered in computer crap. Janus67 and Turn & Burn were punishing SB-E and 7970 in 3D (or was it punishing them?), Beepbeep2 was hurting AMD stuffs:

Oh, and one new pic. A spoil of the weekend. 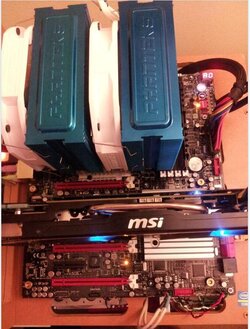 Heh, thanks... I had flipped it horizontally because it was easier to cut off some blank space on the one edge, and forgot to flip it back.

It allways helps me feel a little bit better about my own benching clutter when I see other bench. those are some good pics in my book
You must log in or register to reply here.

March to 2nd Ranked Overclocker in the US