Two weeks ago I threw the build together in my sig below. Today a huge patch came out for ARK and I ended up not having enough space on my main SSD for the game so I had to shuffle some games around. I dumped a majority of my steam games from my secondary (Intel X-25M Drive) onto my External 4TB WD. Everything went great with this, 100+MB/s over USB 3.0 consistently.

Once I had freed up basically the entire drive I attempted to move ARK over from my OCZ Vector to the Intel (About 75GB)... I figured this would go quite quick. However, the transfer started out at roughly 250MB/s then began to plummet to as slow as 500kb/s before cruising at a steady 2MB/s. What... the...

So I immediately hopped on Asus.com and updated every driver and downloaded the latest motherboard BIOS figuring the ones on the CD that came with the board were already outdated.

And here I am still sitting here watching my two SSDs transfer at 2MB/s about 75% of the time with random spikes into the hundreds. It has taken over 3 hours to move roughly 30GB of data between my two SSDs.

In my prior build I never had this issue and it was nothing special - It was a recycled HP Business Class with some generic MSI board.

I know the Intel SSD is much older and is bottlenecked by its 3Gb/s SATA transfer rate - but this shouldn't murder my rates down to 2MB/s unless somehow my two drives are no longer compatible on this SATA controller? That just doesn't seem realistic to me.

I'd be happy to hear some suggestions on how I can solve this issue. My next best bet I can think of is to try and update the SSD drives firmware as well, but I'm pretty sure both are on their latest versions as they're both quite old. I unfortunately do not have any more time tonight to try anything. I will be able to remote in during work and try a few more things in the AM, but this issue is so ambiguous I can't think of anything else significant to try and Google isn't really serving me anything helpful.


Update: This is extremely odd. I am now copying Starcraft 2 from my external to my OCZ Vector and it's cruising at a consistent 125MB/s. It took 3 minutes and 45 seconds to move 23.5GB of data between those two devices. So really the only issue here is SSD to SSD. I just waited out the extremely long transfer to move ARK, but man... took nearly 9 hours to move the game plus 20GB of downloaded content from steam. Something is messed up.

Update 2: Just checked and both drives firmware are up to date. Going to run some diagnostic scans with Intel's SSD toolbox... running out of ideas though.
Last edited: Jul 29, 2016

You're not being ignored...I'm watching this as I have no idea at all as to the problem.
Keep updating here and I'll throw sumpin' out there if I can find or think of anything.

So, if I'm reading correctly, the only issue you've had is SSD -> SSD when ARK is the transfer media?
OP

LutaWicasa said:
You're not being ignored...I'm watching this as I have no idea at all as to the problem.
Keep updating here and I'll throw sumpin' out there if I can find or think of anything.
Click to expand...

Oh I know! This place has always been great and I know silence is usually people scratching their heads just as much as I am!


ATMINSIDE said:
So, if I'm reading correctly, the only issue you've had is SSD -> SSD when ARK is the transfer media?
Click to expand...

Yes - I am running a Full Diagnostic Scan via Intel's SSD Toolbox right now, but after that is done I will try some different media. I have a feeling though it will produce the same results. I transferred some other files last week, but I didn't pay such close attention to it since I was doing other things and it wasn't nearly such a large amount of data. I feel like that transfer was probably slow as well, I just didn't notice and wasn't bothered by it.

Both drives are up to date and seem healthy at first glance.

Edit: The picture is garbage. I'll fix it... doing this through a remote connection so I can't tell the quality difference! Looks alright now, you can see the important stuff

Are you using Steam backup or just copying the directory?
OP

Just a direct copy -> paste. Never had an issue before and didn't even know there was a steam backup method lol. I closed steam before I initiated the move.

That's what I'm curious to hear as well.

What happens if you copy a large file to the other disk? You can even create a large file using command prompt and try copying that just to see.

length is in bytes

I would see if the issue persists when using the Steam backup function.
OP

Janus67 said:
That's what I'm curious to hear as well.

What happens if you copy a large file to the other disk? You can even create a large file using command prompt and try copying that just to see.

length is in bytes

Ok, will do. The diagnostic is at about 45% testing data integrity and it has been running for about 45 minutes. It says it typically takes an hour so hopefully that will finish soon.

Thanks for the suggestions!

As others have stated, I first recommend transferring a single large file. for instance, a 4 GB MKV video file copy and paste onto the Intel x25 . Then check back in with the results and let us know what the transfer rates are . If they are still 1 or 2 MB per second we definitely have to investigate this further.
OP

Well the diagnostic came out good. I attempted to copy a ~4GB .mkv from the OCZ to the Intel and low and behold... drops to 2MB/s. 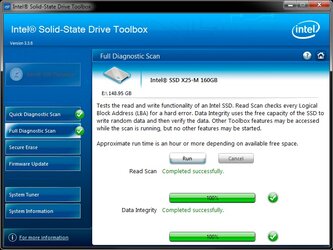 What if you go the other way?
Have you tried without TeraCopy?
OP

Copies like a champ Intel to OCZ... so maybe the Intel's write speeds can't keep up? It never used to be the case.

I have not tried without teracopy, no. I just prefer it over Windows since you can pause and resume when files can't copy over.

Edit: I just realized how backwards my statement was. I'm just beyond confused at this point. It would have to be the OCZ's write speed that can't keep up, but I have no issues with the OCZ writing to anything else. And the Intel has no issues writing from and to my external.
OP

I just copied Jurassic World over at 452MB/s with the Windows Explorer.

Any ideas why that is?

A drive only writes to itself...it sends data to be written/used to whatever.
OP

Right. I'm just beyond flustered. I never would have thought the issue to be TeraCopy. I have never had issues with it in the past. I can't believe I waited 9+ hours for ARK to copy over because of a program I've trusted for years.
N

Which disk is running the OS?

It may just need to be nuked and re-installed
OP

niven said:
Which disk is running the OS?
Click to expand...

The OCZ is my OS drive.


LutaWicasa said:
It may just need to be nuked and re-installed
Click to expand...

Maybe try Zip, Copy, Unzip.
You must log in or register to reply here.

W.D Black causing error code A2 ONLY on Restart