I've been searching online for months, but I just can't find answers to my questions. I have two issues, which are completely unrelated.

First issue:
My transfer rate across the network is slow for Samba, roughly 33 MB/sec. In Windows on the exact same hardware and the same server, I max out my network connection (~117 MB/sec) copying a file to the server's RAID array. I'm using Samba on the server and using this as my benchmark. If I start multiple copies from the server, it still tops out at 33 MB/sec.

I initially thought this was because I had offloading enabled, but disabling it didn't help at all.

Code:
I then decided to get clever and see if the network itself was running slow. If I run "nc" on the server and use "pv" piped to "nc" on my computer, I can push 117 MB/sec to the server all day long.

Code:
So, this tells me that the network itself is fully capable of doing gigabit speeds, but Samba is running slow. I'm not sure what to change.

Code:
If the server becomes unresponsive, either due to a crash or power loss, my desktop computer goes completely unresponsive until I can either umount the share or restart with a modified fstab. From the logs, it repeats this many times:


Code:
Is there an option I can pass so that it doesn't keep trying to contact the server? This isn't so much of an issue because the server is up nearly all the time, but it gets old when I need to shut it down.

It feels weird asking for help, but I simply can't find the answers.

I am looking around for info for you, and myself as I would love to get Samba working on my net. So please bare with me.

For your first problem you have listed I have found that Samba has a lot of tuning features to play with.
The pdf in the following link here outlines some of the 'performance' settings that you can add/tweak. http://oreilly.com/catalog/samba/chapter/book/appb.pdf
And this is their recommended configuration.
-I think this might be outdated though.

Code:
Also there is the send/receive buffers, I guess these get mixed results though. Could help with a larger number like what these have or might work better disabled.


Code:
Hopefully that helps somthing, I am going to set Samba up and play with it myself and look around some more though.

From what I have gathered on your second problem "mount.cifs" might need to have the "soft" option added? However it seems like the default option (soft) would have prevented hangs on devices accessing the files.

Soo, I think this might be what you need.

I've tried quite a few options in my configuration file and I know that I've played with buffers. Here is my current configuration.


Code:
Changing these options changed nothing in Linux. Windows ran the same speed. This is why I'm thinking it isn't an option on the server.

I added that now and see if I can test this later.

I guess there are some limitations there you can tweak too
http://blog.eukhost.com/webhosting/how-to-optimize-tcp-ip-stack-in-linux/

There are big differences in between the Linux versions, but now we will be considering the common issues only. To change the settings of TCP, you need to add following lines to the file /Etc/sysctl.conf and simply run the sysctl-p command.

As in all other operating systems, the size of buffers in Linux is precisely very small. You need to apply the following settings:
Click to expand...

Just tried that as well.


Code:
Noting blew up, so let's try to copy a file.

Code:
69.97 MB/sec, not bad. My hard drive might be holding me back, so let's try something else as well.


Code:
That is certainly much better than I was expecting. I'm going to try these settings on my desktop as well.
OP

Did the same on my workstation and I'm getting the same speeds. That is a lot better than what I was getting.

Sweet! forgive me if I missed it but how much of a difference did that make? LOL I am tired I see now, more than double hehe.

I bet that can be tweaked out as fast a Windows pretty easy.
Last edited: Aug 2, 2011
OP

Tried to copy once I got back my GUI. Still getting slow speeds. 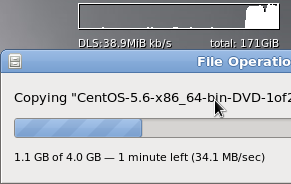 I did leave this out on accident.


Also, you need to check if the following parameters are set to the default value of 1.


Code:
Note: You must leave tcp_mem alone. Default values, and so beautiful.

Another thing you may want to try that may help increase the capacity of TCP, should increase the size of the queue interface. In order to do this, enter the following command.

You will get good increase in speed, making this setting in the wide channels. Doing this makes sense for channels Gigabit Ethernet, but may have side effects such as uneven sharing between multiple streams.
Click to expand...

And I think both of those pieces of material I got this from are older than dirt, so the sizes may need adjusting.
For the send/recieve they have this formula to get the correct size, (buffer size = bandwidth * RTT)
I booted over to Ubuntu and started setting everything up. I have not done any transfers yet though. I imagine it still might take you some testing of different values to find a sweet-spot to set it at.
Just noticed you might need to do somthing like this for the code above though.

Those three are set to "1" already. Txqueuelen was already at 1000.

thideras said:
Those three are set to "1" already. Txqueuelen was already at 1000.
Click to expand...

Well, that is interesting. I can read at 33 MB/sec and write at 71.7 MB/sec. Raising the txqueuelen did nothing for either.

It is also peaking at 104+ MB/sec when I cancel a transfer.

hmm, yea i got mine working good. I only have a 10/100 router though, so I can't really test much. I get like 9.8mb/s both ways real consistent though, small or big files.

I wonder if I could set up a direct connection between the two machines I have to get a gigabit connection as they both have gb nic's.
OP

Well, one thing is fixed. I took down my server shares to move RAID arrays and my computer didn't explode when I shutdown Samba. "Soft" in my fstab file fixed it. Thanks!

When I stopped the service, any windows I had open that were in the network share stopped working, but it let me kill them gracefully.


Code:
Now I just need to nail down these network transfer issues.

Sweet! Glad that worked! Kinda strange that is supposed to be the default setting (soft) from what it said but seems like it was really defaulting to hard for some reason.

I am still looking into that network tuning though, and have found a few things out after playing with all this also lately. I think the txqueuelen is the same thing as MTU in most routing configurations soo if it was at 1000 or 100 you might want to try 1500.

reading a little on that here right now.
OP

Thanks for the link, I'll try that a bit later. I'm making large changes to the internals of my network, which includes formatting the server. I want to make sure that nothing I've done thus far has cause it to run slow. A clean slate is the perfect testbed for this.

thideras said:
Thanks for the link, I'll try that a bit later. I'm making large changes to the internals of my network, which includes formatting the server. I want to make sure that nothing I've done thus far has cause it to run slow. A clean slate is the perfect testbed for this.
Click to expand...

Exactly what I was thinking with testing it on Vmware, still trying to figure out if there are virtual network limitations in doing that though.

It's no fun that most of the information for this stuff is soo old though, but I guess that's just the way it is with Linux...

I really want to squezze more details out of this though, as from what I have read in a few places, Samba should be as fast as FTP if tweaked correctly. And 30mb/s on a Gbit network is unacceptable to me LOL

I have done a lot of playing with those settings though, they are pretty much harmless in terms of keeping a system running, but if anyone would like to try there are only two files to backup and play with editing. "/etc/sysctl.conf" & "/etc/samba/smb.conf"

But yea, the information in this thread is a little hard to folow, what I put on my forum is easier to folow but has no results. So I will leave that up to you to decide if it's worth reproducing here in the same format. (as in if you find better values and want to throw up some results)
That's totally up to you though, if you feel like doing the legwork organizing results.

But yea, I am definitively still looking at this, trying to find that fine print written in stone so-to-say.
LOL I posted the thread I made on reddit and got like 500 hits in a few hours,, soooo could do pretty good here!
Last edited: Aug 12, 2011
OP

This is making less and less sense the more I transfer data. I have made no changes to the network or any settings since my last post here. Here are two screenshots of me transferring rendered blu-ray files to my file server. The top graph is inbound traffic and the bottom graph is outbound. 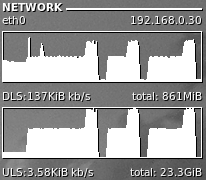 This one is a lot more annoying. During a transfer, it suddenly drops to exactly 11.2 MB/sec and stays there until the next file. This is very close to a 100 Mbps network line, which I'm a bit suspicious of. 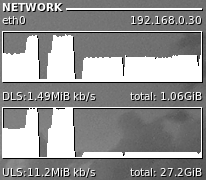 I'm completely lost at this point. To make it even stranger, my laptop did the 11.2 MB/sec transfer thing as well. It was on a completely different portion of the network, even. I'm thinking it has to be something with Fedora, since both the laptop and desktop share the exact same version.
Last edited: Sep 11, 2011
OP

Hmm, maybe this is a server configuration issue. My Windows box just did the same thing. What is odd is that the Windows box didn't do this for the 700+ GB that I moved a week ago, but it does now. 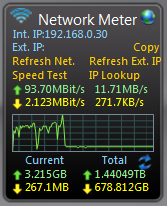 Since the server is going to be formatted soon, I'm not too worried about it.

Very interesting. I did notice that 1500 seems to be the magical number with the txqueuelen. Looks to me like that is synonymous with the MTU used on most routing/switching firmware. You could set that on all your interfaces individually using a command like this. Substituting eth0 or eth1 for whatever you are using.


Code:
I would try that before anything else.
You must log in or register to reply here.