Been awhile since I did a build, my last was in early 2017. Hoping to re-use my Antec P280 case, it's got 5 new 120mm 1000rpm fans (replaced them all in March) and its been fantastic for my last 2 builds. No window on this case, so I don't care about RGB nor how much faster RGB makes a PC. I have a bunch of storage I'll be carrying over, so only a new C drive is needed.

Here is what I am looking at:

I like it. So long as you can utilize all the cores and threads, that's a great way to go.
OP

Looks fine, just some comments...
Crucial P5 Plus will be released soon - PCIE 4.0 version. Can also take a look at Samsung 980 Pro or WD SN850.
Somehow I would pick something like Strix B550-E XE or MSI B550 Unify. It depends on the budget.
Get the NH-D15 chromax.black cooler. Looks better and should cost about as much. Even though you are not planning to have a window, but maybe you will reuse it in the future as Noctua will release mounting kits for the next gens.
Ryzen 5900X heats up about as much as 5800X and on average, runs at a higher clock so at least for me is a better option.
OP

Woomack said:
Looks fine, just some comments...
Somehow I would pick something like Strix B550-E XE or MSI B550 Unify.
Click to expand...

Any specific reason why for either board? They all seem priced about the same as the B550 Taichi, I figured I'd go with that as I've had rock solid performance on my previous Taichi board. They are usually the best that Asrock offers. I am passing on the X570 mobo's as an option as I just don't want to deal with the southbridge fan.

I am passing on the X570 mobo's as an option as I just don't want to deal with the southbridge fan.
Click to expand...

This 'concern' was blown out of proportion from day 1. Few are audible over system fans and most of the time not needed anyway. If you still care, there are X570S boards out/coming out that don't have a chipset fan and have updated hardware (Wifi 6E, updated power delivery, updated audio codec, etc).

B550 is generally fine so long as you are sticking with a single GPU, a couple of M.2s and SATA drives. If you plan on much more, then I'd step up to X570.
W

lordkosc said:
Any specific reason why for either board? They all seem priced about the same as the B550 Taichi, I figured I'd go with that as I've had rock solid performance on my previous Taichi board. They are usually the best that Asrock offers. I am passing on the X570 mobo's as an option as I just don't want to deal with the southbridge fan.
Click to expand...

I find ASUS to have the best/longest support because they have a quite large BIOS team. ASRock is fine but I guess they already released everything important and moved to other motherboards. I also like the ASUS XE version as they add a PCIe x16 card for M.2. MSI B550 Unify just because it's the best for RAM support and overclocking but is also pretty well designed. Again, ASRock is fine and I'm using/reviewing their motherboards so can confirm that their B550 mobos are also pretty good.
With X570 is like ED said. For gaming, it won't matter but if it's not the S version then will heat up more, and fans on some motherboards are annoying. X570 is older and is not getting any updates for a while already. We can also see that B550 are usually overclocking better and have better RAM support. On the other hand, the RAM you picked works great on everything.
OP

Ok, thanks again for the mobo suggestions, I gotta do some research.

Just ordered a 5900x from Amazon at MSRP , was in stock shockingly at msrp. I'll figure out what mobo I want by tonight hopefully. Then to order the rest of the parts, but I am not worried about them being in supply as much as I was the CPU.

If you are going to stay with a gen3 M.2 I would look at some reviews of the SKHynix p31. Seems to get really great reviews and rather reasonable on price
OP

Will do, I have very little SSD knowledge, my last 2 drives being MX500s from Crucial.

I saw Micro Center and Amazon both sell the Inland brand also, are they decent?
OP

Decided to go with a better PSU, since I wasn't planning on a 3080ti that needs three 8 pin power connectors.

dejo said:
If you are going to stay with a gen3 M.2 I would look at some reviews of the SKHynix p31. Seems to get really great reviews and rather reasonable on price
Click to expand...

Thanks , I did read a few write ups and chose to go with it!

Everything other than mobo is on the way now, still on the fence between the MSI and the Asrock, still leaning toward Asrock. Gotta read more.

And Amazon just dropped the Taichi board down to $249 , so I ordered it.

All done, thanks for the suggestions. Now to build it next week!

Pretty excited, my last full build was in 2017. And a bit in shock that I got all my parts at or below MSRP.

My friend mentioned the RAM that I ordered is probably single rank, and I might be better off going with a 8GBx4 stick setup.

I thought all 16GB sticks were dual rank? No?
OP

So if I end up with 2 sticks of single rank memory, I probably should return them right? Dual rank is important if I recall correctly.

Parts are all here , thanks for the suggestions and replies everyone. I got lucky and my 16GBx2 ram from Amazon was dual rank. 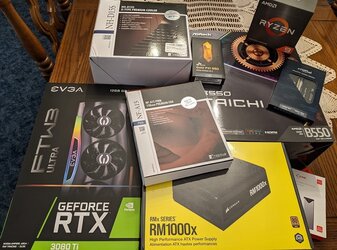 Hope to get it assembled on Monday.
OP

It has been assembled and POST'd on the first attempt! Lets just say yesterday was a long day of old pc disassembly and case cleaning, and then new PC assembly. Windows is installed, needed a new copy due to a new mobo. And going from a SATA SSD to an M.2 is like engaging ludicrous speed! AsRock was nice enough to send out a mobo with BIOS 1.3, so my cpu was supported out of the box. I updated to BIOS 2.0 which is the most current version. I still have some tweaking to do, and I had to disable the RGB disco that was going on with my mobo and video card.

Super impressed with the Nocuta cooler, there is no way the standard edition would have fit, that side offset is needed! The Noctua fans are so quiet , I had to make sure they were working.

Another interesting thing is the 3080ti weighs so much with the extra cooler thickness and limited space to work in I had to lay the case down on its side to install it, first time IÂ’ve ever had to do that for a video card. I am also using a gpu support stand, I forgot to snap a photo of that. I hate side window panels, so I reused my P280 case (3rd build in it) I gave it got a good cleaning.

Always love this pic from GN: 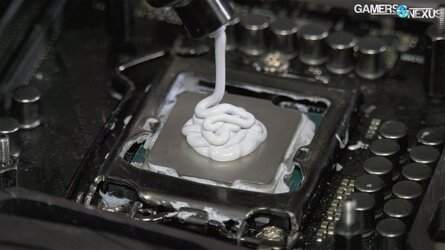 I am a horrible judge of thermal paste , I use to do the 3 grains of rice, but the Noctua instructions said pea size. Pea's come in all kinds of sizes! I decided on medium-large pea. 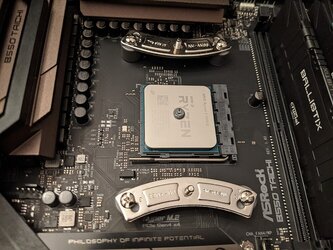 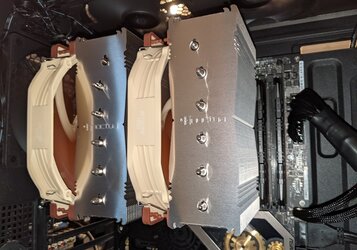 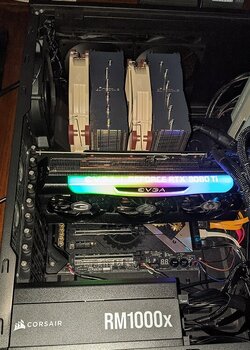 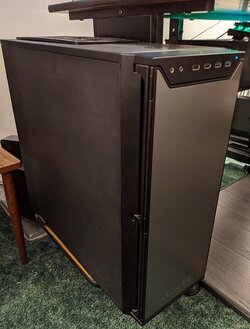