Spare parts Server build (with no purpose yet)

After building my new plex server I had some leftover stuff, and combined with some other leftover parts i was able to put together a decent server.

Not sure what i'll do with it yet. maybe use is for some video encoding (after a CPU upgrade) or temporarily donate it to my dad's SETI farm until i find something to do with it.

To fit the motherboard, i had to re-drill some standoffs. the board is listed by Supermicro as "Enhanced E-ATX". luckily the case has plenty of room to fit the taller MB. The bottom 6 standoffs lined up, but i had to redrill the upper 6 ones. luckily it was pretty easy, and the lower 6 helped me line it all up perfectly. I had also already cut the holes in the front and top for the additional fans. 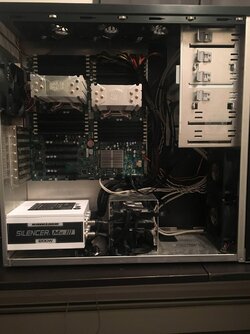 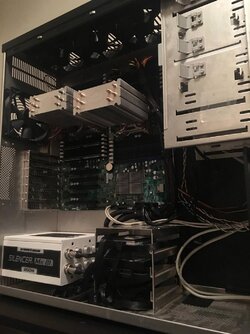 when i was swapping the MB in the plex server, i wasnt careful enough and slightly bent a CPU pin. i VERY careful tried to bend it back, but i was too scared to break it so its still a little bent. I was worried that it wouldnt work, but i fired it up last night and its working! woohoo!

Nice backup system you have there.

One of these days I really need to replace my super old Naas server (a64 x2 with 2g ddr1). So maybe I can get the Plex server off my main box.

You should run cinebench r15 to see what it scores.
OP
G

I also ran P95 on it. These chips make like no heat lol. Small FFT with AVX and the hottest core was like 42C
OP
G

Do you feed alot of devices with Plex ?
Didn't think you needed that much umph =)
Most I ever feed is two Chromecast's.
OP
G

what is this "need" talk?

but my plex server/NAS definitely has more power than it needs right now. I don't serve many users mainly just me and like 1 other friend right now. but i'm starting to include 4k content in my library, so transcoding that to 1080p TVs and mobile devices uses quite a bit of power. my 2x 2680v2 setup in my current plex server can see up to about 40% CPU load just transcoding a single 4k stream.
OP
G

stole the PSU and SSD out of this to use in my mining rig. lol.

replaced the PSU with a spare corsair 750W i had.

it's good to use all these extra parts to good use.
You must log in or register to reply here.

Need a New Server and Guidance

Free Server, Worth Messing With?