Overclockers is supported by our readers. When you click a link to make a purchase, we may earn a commission. Learn More.
U

Hi Forum people. This is my first post and I am just in the planning stage of building my first Ryzen rig. I have most of the case part figured out (this is my first real build since 2015) so next is to choose processor and memory. But I was thinking to myself perhaps start with a better CPU with more OC ability. Is there a stand out Ryzen chip that does this? Like better in some way than other ryzen chips? I want to figure the CPU out first and then I will get to the motherboard. Pictures will be posted once I get going.

Here is my new case: 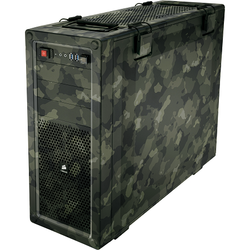 Overclocking, as it was a few generations back, isn't here anymore. All chips, be it Intel or AMD have most of the headroom gone with stock boost. A couple of hundred MHz here or there is about it for all of them.

Are you stuck on AMD? Intel is the better chip at this time and AMD (as well as Intel) are coming out with new chips in the coming months. What's your budget, what parts do you need to buy with that budget, and what do you do with your system?

Where are you located? By a Microcenter, by chance?

@unclockable, Nice case! Back in the day I used to belt feed a .50 caliber outta can like that!
OP
U

EarthDog said:
Are you stuck on AMD? Intel is the better chip at this time and AMD (as well as Intel) are coming out with new chips in the coming months. What's your budget, what parts do you need to buy with that budget, and what do you do with your system?
Click to expand...

always wanted to at least build one Ryzen system in my lifetime [namely] to get a handle on the AMD angle in terms of CPU operations. In other words, I just want to familiarize myself with their CPU/logic because I've just done Intel only for as far back as I can remember. So yeah, I amstuck on amd here.

This is a covid inflicted situation. I find myself with all this time now, so the build is purely for tinkering and tuning and passing the time. Budget is about $600. I have no parts so far other than the case.
OP
U

ihrsetrdr said:
@unclockable, Nice case! Back in the day I used to belt feed a .50 caliber outta can like that!
Click to expand...

Thanks! What can I say, I spent many hours searching for a new case over the last week and instantly knew this was the one when I saw it.

EarthDog said:
Overclocking, as it was a few generations back, isn't here anymore. All chips, be it Intel or AMD have most of the headroom gone with stock boost. A couple of hundred MHz here or there is about it for all of them.
Click to expand...

I have heard that the days of the 50% overclocks are gone,,, which is kinda sad, but at the same time it's good to see Intel and AMD making processors that boost regulate themselves and OC as needed by their respective turbo systems.

when ever i've attempted an OC on my 2600 or 3600 i always seemed to be limited by my ram or memory controller. I felt like i could get more but probably not much more. But i'd either just get fed up and peg it at boost clock 24/7. I managed to get my 3600 to oc decent finally swapping ram to something a little nicer during the zombie apocalypse but before i could get to into tweaking it a little more life changed and it got packed away and my housing situation is in kind of a limbo state...still

unclockable said:
....that boost regulate themselves and OC as needed by their respective turbo systems
Click to expand...

Turbo clocks isnt overclocking, but indeed they are trying to get more out of the box than they used to (why theres little beadroom for actual overclocking). With 3000 series, if you're just into tweaking, you can tweak via PBO, or all cores/threads and see what works best for your use cases. Memory overclocking doesn't yield much all around, but you should be able to push to 4000 mhz or so.

So....$600 and you need storage, PSU, and video card...you're likely relegated to 3000 series. Like Nika said, perhaps a 3600x some ddr4 3600 with low CL, 360mm aio cooler is a great cooling solution too. I assume you aren't gaming as that wasn't listed so you only need a cheap arse graphics card to put an image on the screen.

Again, where are you located?

Zen 2 is ok, but if you can reach a little deeper, I think you would be quite pleased with a Zen 3 CPU. Something like a 5800X or 5900X. Those will boost over 5GHz with PBO and CO. Pair it up with a good B550 board and you are set for a bit. But you have to keep in mind these parts are two years old already..
OP
U

EarthDog said:
Again, where are you located?
Click to expand...

I have a background in security and typically don't divulge that kind of information on internet-based forums.

OK. The point was that if there is a Microcenter near your 20, deals are to be had on motherboard/cpu combos. I'd strech that six hundo as far as I could is all. Used even.

If you can get a 5000 series, that's great advice as it's the latest and greatest for the next few months. But, if you're just tinkering and don't care much about performance (5000 series overclocks the same way... PBO or all core... choose your poison depending on workload for best results) 3000 series is a fine CPU. It's better than Coffee Lake CPUs and AMD's first real kick in the pants to Intel with the 5000 series the one that landed squarely.


Can't wait to see what you come up with!
OP
U

ok cool. This is not going to happen overnight but when it does you will be sure to get updates. I am liking where this is going so far! thx for the help

So is there no "binning" really required from AMD here? especially since you guys haven't identified a golden AMD chip to work with. I assume that means they all overclock about the same? within reason, obviously.

I have been reading up on the binning thing and from what I gather intel has some KS models that are binned on a whole other level? Are there software programs you can run to determine how good your core really is?

Thanks one and all.

No binning from AMD (outside of what falls into their SKUs). As was said earlier, they all overclock about the same, yep!

The KS models are just binned to reach the clocks they are rated for (slightly higher than the K). The same amount of headroom there too (little). They'll top out at the same spot a K will for all intents and purposes, maybe another 100 Mhz or so.

I don't know of any programs to know 'how good your core is', no. It's called "the silicon lottery" for a reason! Long gone are the days when this batch and that batch generally meant overclocking is better. With today's AMD and Intel chips, you simply run out of cooling. It doesn't matter if you throw in a double pass car radiator, the problem is getting the density in the CPU die and getting the heat out that way.

Ryzen Master will tell you what your best cores are on what ever cpu your using in the system if thats what you mean...
You must log in or register to reply here.

Alienware offering replacement should I get Ryzen 5800 or Intel 10900kf