Speedfan config help (and questions about a PWM splitter)

The setup came with a PWM hub that has spots for 4 fans off 1 pwm header. I was only planning on running two fans but even then, i had some people advise me against running more than one fan off of one header so did not use it. Instead, i plugged one of the fans into the pwm header next to the CPU PWM header on my board, and the fan into the "rear fan" PWM header. I downloaded speedfan and configured both fans to crank up automatically (controlled by speedfan) based on a fan curve i made. Problem i have is that i can be sitting idle, or web browsing, or doing rather non-intensive stuff but quick spikes in CPU usage causes temps to jump slightly which tells speedfans to pulse the fans up....at which point they quickly slow back down. Then pulse back up. Then slow back down....you get the point. I dont like this behavior. If i run my games without speedfan running, the CPU gets too hot. It isn't telling the fans to spin fast enough, so i sorta need something like speedfan to ensure i get everything out of these. The AIO pump is plugged into the CPU pwm header fyi.

This is the deepcool fan hub: http://www.newegg.com/Product/Product.aspx?Item=9SIA6J32WP1382

Here is my fan curve setup. I have it like this for both fans so they match. 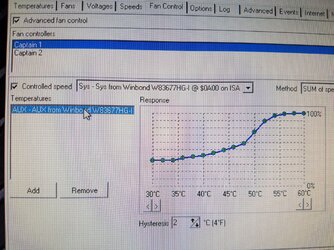 Does anyone have any advice on how to configure this better? Or if using the non-powered fan hub is safe and a better route to go? I tried using the built in powered fanhub/controller on my dukase v2 case, but its some sort of voltage control and the fans simply turn off at medium and low. Only run at max power on the high setting (all other fans connected to it work fine on this controller, just not the tf120s).

If the hub is powered from somewhere besides the motherboard it doesn't matter how many you run on one header.

(I'm mobile, so I wasn't going through the links, sorry)
OP

ATMINSIDE said:
If the hub is powered from somewhere besides the motherboard it doesn't matter how many you run on one header.

(I'm mobile, so I wasn't going through the links, sorry)
Click to expand...

No it isn't powered, that's why I was advised against using it originally.

I'd run the pump off one header and all your fans off of a powered splitter on the other connector, controlling both by temp.
OP

ATMINSIDE said:
I'd run the pump off one header and all your fans off of a powered splitter on the other connector, controlling both by temp.
Click to expand...

The pump is currently on its own header, the cpu pwm header already. I read some stuff about how fans on non-cpu pwm headers can pulse up and down because of how the pwm signals are modulated differently than a cpu pwm header. I would imagine a powered header hub would come with software to control it by temp? Cheap ones I've seen are just the header hub, which would probably bring be back to speedfan no? And then here I am again lol.

Why not use the motherboard software?
OP

ATMINSIDE said:
Why not use the motherboard software?
Click to expand...

Im unaware of motherboard software to do this. I tend to minimize using prepackaged mobo software as i think most of it is bloatware pretty much. What is intel's utility for this called?

Check the download page for your motherboard. If there's a software for it, it'll be there.

ATMINSIDE said:
Check the download page for your motherboard. If there's a software for it, it'll be there.
Click to expand...

Well i got the utility....doesn't seem very robust. My rad fans are "chassis inlet fan" and "chassis outlet fan" i guess. 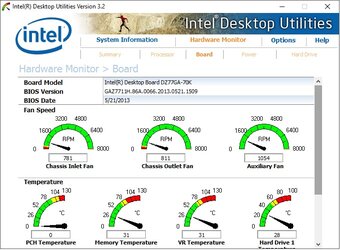 Takes some configuration but yeah it works pretty good, i just need to learn it better to get the fans to behave the way i want with it. Poked around in it a little more and i dont notice the pulsing of the fans as much but im not sure if its cuz i have the AC on in the house now or if i did a meaningful change lol.
D

I use the fan control options in UEFI, as the software side of things doesn't seem to work as well.
You must log in or register to reply here.

A
confused about ARGB fans,

F
6 A-RGB fans inside case for new build - how?