SSD seems to be dying, any way to fix it?

So when I woke up today, my whole PC was almost entirely frozen up. Couldn't even get the power button on the case to do anything, so I flip the switch on the PSU and try to reboot, and Windows 10 gives me the CHKDSK prompt. It gets to a certain point, then the ETA shoots up to 999 hours (or days? Not sure how their timer is laid out) and the PC restarts. This happens a few times, until it boots into automatic repair. I select the continue with boot option, and it takes a painfully long time to load, log in, etc. Desktop is sluggish and freezing, and then Windows gives me a "Restart to fix drive errors" message in the action center.

I'm currently on another drive that I had Windows 7 installed on just for kicks, about to download some kind of drive checker. Windows 7 also gave me a CHKDSK prompt, and this time it was actually successful, though I didn't try to boot into the Windows 10 drive yet. Any recommendations on program I should use? Is there any program that could help fix this? It's a Crucial BX500 for reference.
Solution
So, fun little update...turns out one of my cables was bad. It has since totally stopped working, and I had a sinking suspicion that something about the 1TB SSD being bad wasn't totally correct. Just a gut feeling, y'know? Primarily because this was totally out of the blue, and because CrystalDisk said the drive was fine.

My best guess is that the bad cable was plugged into the 2TB HDD, and that's what caused that to be throwing a Caution label in CrystalDisk, and then through my various reshuffling of drives, I just happened to end up using the bad cable with the 1TB SSD. I found out it was bad, because that was actually the cable I had the 240GB Win7 SSD plugged into at one point as well, and Win7 stopped booting. But then as soon as...
Sort by date Sort by votes
OP

Went ahead and tried CrystalDiskInfo, and it actually says the Windows 10 drive is fine? But it's throwing up a "Caution" label for my 2TB HDD. Can a failing drive with no system files on it affect the performance of a windows installation? 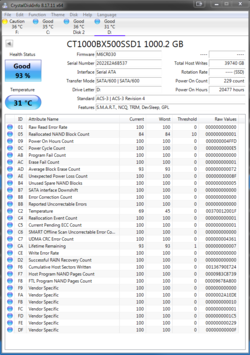 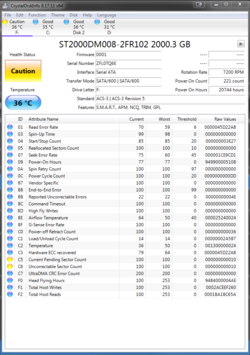 Sectors are dropping...time to get a backup off it and get another before it just doesn't work.

Welp, RIP. Windows 10 won't even finish loading to the desktop now without locking up, should I just assume something went wrong when the HDD started failing, and reinstall? What's weird is I have a 240GB SanDisk SSD with Win7 on it that I keep around specifically for troubleshooting things like this, and it doesn't lock up like Win10 does on my 1TB SSD. Although I guess trying to understand why modern Windows is the way it is is an exercise in futility LOL.
Upvote 0 Downvote
OP

I unplugged all of my drives besides the 1TB SSD to reinstall Windows 10 on it, because I didn't want it doing any of that boot manager crap with my other drives. So I nuke the drive from within Windows setup, go to install...and in like 30 minutes, the setup didn't progress a single percent. Tried 4 different times, with the flash drive plugged into 4 different USB ports, didn't make a difference. And now, CrystalDisk is reporting that the 2TB HDD is fine??? I'm so confused. It also says the 1TB SSD is fine, yet CHKDSK ran again when I booted back into Windows 7. At this point, I'm not sure what to think. Are both drives bricked? Is it just the SSD? Just the HDD?

I genuinely can't make heads or tails of this situation.
Upvote 0 Downvote

Get a USB cradle and put each drive into the cradle, one at a time. Check them with Crystaldiskinfo on another properly working computer. For what it's worth, my impression is that CrystalDiskInfo may be more reliable on mechanical drives than on SSD's. If you don't have a USB cradle you need to get one.

I can tell you that when you have a system drive and one or more storage drives, if one of the storage drives starts to flake out it can prevent the system from booting because it can't be read. The system knows it's there but keeps trying and trying to read it but can't.

Make sure the 1TB System drive SSD is using the correct partition scheme to match the bios mode. If the bios is in UEFI mode, the SSD should be partitioned in GPT. If the bios is on legacy mode, partition the drive in MBR.
Upvote 0 Downvote
OP

So I nuked the 1TB SSD from within Windows 7, did a full format, and reinstalled Windows 10 on it with all other drives unplugged. This time, it worked, and I thought things were okay, because CrystalDisk still said all drives are fine. I left the 2TB HDD unplugged just in case it really is toast, so it wouldn't mess with Windows anymore. It worked until this morning. PC locked up again, rebooted, got the infinite loading circle after my motherboard's BIOS splash. At this point, I'm convinced the SSD is just outright bad, despite CrystalDisk stating the opposite, and am going to move forward with the RMA process.

Worth noting Windows 7 still works fine on the 240GB SSD, and the 1TB HDD still continues to give me no issues. I'll update with any further questions, if more pop up.
Upvote 0 Downvote
OP

So, fun little update...turns out one of my cables was bad. It has since totally stopped working, and I had a sinking suspicion that something about the 1TB SSD being bad wasn't totally correct. Just a gut feeling, y'know? Primarily because this was totally out of the blue, and because CrystalDisk said the drive was fine.

My best guess is that the bad cable was plugged into the 2TB HDD, and that's what caused that to be throwing a Caution label in CrystalDisk, and then through my various reshuffling of drives, I just happened to end up using the bad cable with the 1TB SSD. I found out it was bad, because that was actually the cable I had the 240GB Win7 SSD plugged into at one point as well, and Win7 stopped booting. But then as soon as I moved it to a different cable and installed Windows 10, everything was fine. Fast forward to me getting my RMA replacement of the 1TB SSD in the mail, and I go to plug it into the motherboard with the bad cable, and it won't show up in the BIOS, Windows, etc. Everything else works fine, I've had Windows 10 running off of the 240GB SSD the entire time the 1TB SSD was out for RMA, and I've had zero issues.

I'm glad to see you figured it out

One quick tip. If any issue like that occures with SSD (and you are sure that the cable is fine ) then plug only a power cable to the SSD and leave it like that over night. Crucial support suggested that to me some years ago and it actually fixed the drive. TRIM and other things inside fix some issues when there is no task queue.
One more thing that fixes drives with weird issues is to run diskpart and "clean all" command. Sounds simple but it fixes some cell-related issues.

I had one weird thing in the last days. One of 2 M.2 SSD wasn't visible in RAID1. The motherboard dropped it because of SMART error, but it wasn't even visible. After reconnecting it a couple of times, it started to work, but there was still that SMART error. I removed it from RAID, rebuilt the RAID and cleared SMART log using Intel software and now it works fine. No errors, 100% life, SMART log doesn't show anything. I have no idea what happened.
Upvote 0 Downvote
M

Are there certain types of SMART errors that are commonly associated with a bad or marginal SATA cable?
Upvote 0 Downvote
W

I'm not sure, as at home or at work (I work with IT hardware daily), I have barely seen a few SMART errors on SSD. Usually, there are two stages for SSD, no errors at all -> instantly dead.
Upvote 0 Downvote
You must log in or register to reply here.

How to Disable Microsoft Nags to Update Windows 8.1 [to buy a new computer]