Now, on to the problem.

So I put everything together, installed OS, all current drivers (including updated Mobo BIOS), and booted up (leaving all bios settings at default, which read the RAM as 1333)
Once I established the system was stable, I went back into BIOS and manually set the RAM to 2133, set timings to manufacturer specs, and set voltage to man. spec of 1.65v. 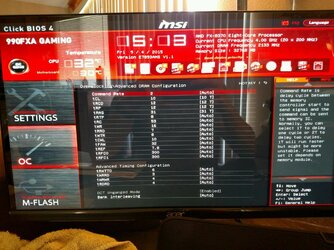 After rebooting, everything appeared stable, except I noticed something strange - my system monitor only showed 22- or 23-point-something gb of RAM available, whereas at default it showed all 32ish.
Foolishly, I didn't think anything of it, so I booted up Prime95 to get a system baseline before starting to OC.

Well, that's gotta be RAM, right? So on to MEMTEST86+. I keep all RAM settings as they are, boot up MEMTEST, and go run errands. 2+ hours later I get home to the below results: 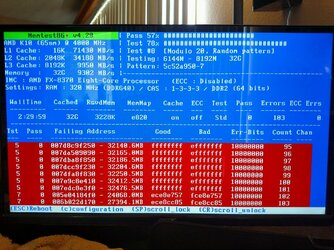 So I have two main concerns from these results.
The first is obviously the errors. The first 101 of the errors are all from Test#5, with the last two being from Test #7.
The other concern is how MEMTEST reads my RAM settings. DDR2, really?!

After seeing these results, I go back into BIOS, step the clock speed down to 1866 and leave voltage and timing the same (even though in theory I should be able to tighten up the timing significantly at that much lower of clock speeds, but that's a matter for another time)

Now not only does my system actually show all 32gb of RAM being available, but 6ish hours of MEMTEST (that's how long it took for one complete Pass of all tests for all 32gb), yielded no errors. Hell, Windows Memory Utility even passed 100%, for what that's worth. It is worth noting however, that MEMTEST still showed the same DDR stats and timings that it did when clocked at 2133.

So I rerun Prime95, (still with default/stock settings for everything except RAM) and all three tests run perfectly fine for at least 30 minutes each. Being the impatient [email protected] I am, I decide that's good enough to try some mild OC.

I disable any and all power saving/throttling features in BIOS (AMD CnQ, C6, Turbo Core, etc.) and set clock to 4400mhz at 1.432v (CPU-Z showed stock voltage at like 1.36v). I know I should be able to run that speed with much lower voltage no problem, but my AIO actually cools very well, and I'm more interested in seeing if my "stable" RAM can support the OC, without having to worry about cores failing from low voltage.

So I set up CPU-Z, HWMonitor, and MSI Command Center (to monitor fans), and boot up Prime95. All three tests run for 30min+ with no errors. Now it's about 2AM and I have to be up at 8, so I decide to let Small FFT run for that duration. I set everything up ,and head to bed. Last I saw it had been running for about 20 min with no issues.

Being the idiot I am, I forgot to disable the screen saver

So when I woke up, both screens were black (system froze on screen saver) and required a hard reset. As such, I had no way of telling how long the test ran before the system froze.
The fact it froze, however, tells me the ram failed yet again.

Oh, and one other thing: at the current 1866 speeds, my Mobo reads all 4 DIMM as follows: 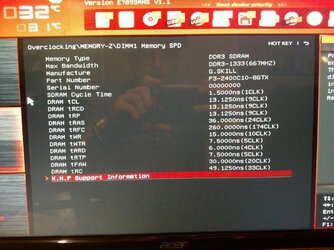 At this point I'm thinking I have at least 1 bad stick. I'm *REALLY* hoping to avoid having to test each stick individually, but I'm afraid that's my only real next step.

So... anyone have a thought?

Jhecker1020, welcome to the forum. While your motherboard may support 32g or 2133 Ram the 8370 is only supported to 1866 Mhz. Now this does not mean the Fx 8370 will not run at 2133 or 2400 for that matter, it is just not supported to those speeds. With ram, the more Gb you have the harder it stresses the IMC of the processor. What is most likely happening here is the mother board isn't giving the IMC enough voltage to keep it stable. Look in your BIOS and see if there is something called the "Cpu NB Voltage" (not NB Voltage), if it is there raise it to 1.25 V and test if it is still failing. If it is keep adding volts to see if it will stabilize, stop around 1.35 v. Make sure you watch the package and Cpu temps because raising the Cpu Nb voltage will increase the temps, you may want to download Hwmonitor "Non pro" to keep tabs on those temp. You want to keep the Cpu and Package temps below 70c and 62c respectively. You can also Download Cpu-Z and post screen shots of the following tabs Cpu, Spd and Memory so we can have a peek under the hood so to speak.

Thanks so much for the reply!

Go figure I'd shell out for the higher end FX processor and just assume it's rated to support it the higher RAM. My standard CPU NB Clock speed is 2200 - should I raise that as well to accommodate the 2133 speeds?
Also I figure I should put my CPU clock and voltages back to default before attempting anything with the CPU NB, if only to remove other possible errors?

Jhecker1020 said:
Thanks so much for the reply!

Go figure I'd shell out for the higher end FX processor and just assume it's rated to support it the higher RAM. My standard CPU NB Clock speed is 2200 - should I raise that as well to accommodate the 2133 speeds?
Also I figure I should put my CPU clock and voltages back to default before attempting anything with the CPU NB, if only to remove other possible errors?
Click to expand...

Truth be told unless you're doing encoding or video editing for hours at a time the difference between 1866 Mhz and 2400 Mhz is negligible. Yes, set the Cpu clock and voltages back to stock and leave the Nb freq at 2200 for now. Once the memory is stable we can work on raising it, as it will help the memory perform a bit better when raised, one step at a time though. Post up the Cpu-Z pics when you get a chance so we can all be on the same page. Then set the Cpu Nb voltage to 1.25v, make sure it's the Cpu NB Voltage and not the Nb Voltage, then run Memtest or Prime Blend. Additionally, I will be on and off most of the day and MIA tomorrow and a lot of the members are likely MIA due to the holiday weekend.
OP
J

Before I run Prime95, I have a few concerns:
- Is there a way for me to confirm CPU-NB Voltage while in OS (and not BIOS)? I don't see that stat on CPU-Z or HWMonitor.
- Which temp in HWMonitor is the Package temp?
- Should I even run Prime to see if it freezes like before or should I skip straight to MEMTEST? (Which takes wayyyyyy longer) 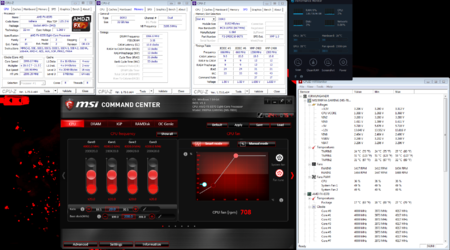 Ok first thing I see is your tRC (Bank Cycle Timing) timing it's at 53 set it to 43. Sometimes having a timing too loose will also cause instability, though I still believe the Cpu Nb voltage is likely the issue. On your board I believe the TMPIN2 Temperature is the Cpu and the Package is where it says AMD Fx 8370 Temperatures. The motherboard is what has the sensors on it for voltage, so if it does not have a sensor for Hwmonitor to read the Cpu Nb voltage, then no I do not believe you will be able to read it within windows. You may want to try AMD overdrive and see if you can monitor it through that program. When I'm trying to find stability my tried and true program is Prime Blend, I find if I can pass 2 hours of Prime Blend I can throw anything at my Pc without fail. I'll be back on later sometime. GL
OP
J

Mandrake, you sir, are a godsend. I cannot thank you enough. Anywho.

So I set the tRC to 43 in BIOS to match the other manufacturer timings.
I also dropped the clock speed back to 1866, as I'd like to get the CPU's max supported spec running smoothly before I push it.

After the above, I ran Blend for 30 min, and no freeze up! Really low temps, too.
So then I got brave. 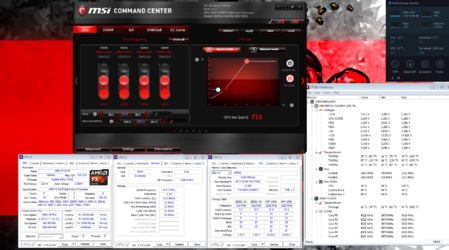 Looking at the Temps, I believe that TMPIN0 is my actual CPU temp. It stayed identical to the CPU temp shown on Command Center as well.
With that in mind, you can see after 2+ hours of Blend with CPU NB @1.25v and 2400mhz, CPU and Package only capped at 38 and 41 respectively, and that's with my AIO radiator fans never going above 40%!

Next step for me will be to trim down the timings to 8-9-9-24, and try to get that stable. I figure I should have no problem achieving those times, as G. Skill makes another version of my same RAM that's clocked at 1866 @ 1.6v with those exact timings http://www.gskill.com/en/product/f3-1866c8d-16gtx

Thanks again, and wish me luck!

Oh, I forgot to metion that no matter how I clock my CPU NB in BIOS, CPU-Z always says it's at 2200. I'm thinking it's an error on their part, as my BIOS appears to always save my changes.

Lastly, how the hell do I mark this thread as [SOLVED]?

You're very welcome. Looks like you're good to go. The Nb frequency may or may not be changing, some boards even though it gives you the option may not. We do not see many of these MSI gaming boards cross through the forum so I am unfamiliar with it. AMD Overdrive will show you what the NB Freq is set at, you can try using that to see. One thing that is concerning me is the 80C TMPIN 1 temp, I'm betting it's the the sensor near or at the VRM/NB heatsink. I do recall these boards have a tendency to run hot in that area. Couple that with you being on a enclosed H2O unit, where the air normally flowing over the VRM/Nb heatsink when using AIR to cool is all but removed, it will exaggerate the issue. 80c isn't the end of the world but if you have a spare 80 mm fan or similar try mounting it on the Heatsink to the left of the cpu. It will help reduce this temperature if that is indeed where the reading is coming from. I do the same with my AMD rigs especially ones running Fx chip, they tend to heat that area up more then others. I use zip ties to hook my 80mm fan to the heatsink, not pretty but it works.

As far as the memory goes it will be trial and error. No two sets of sticks are alike, the motherboard and cpu will also be determining factors on how tight you will be able to get the timings. Just tread lightly, adjusting one timing at a time. If you push too hard working on timings you could bork the BIOS and or the OS. If this is your only PC you may want to download the BIOS to a flash drive before hand, just in case something goes wrong.

You can mark the thread solved in the "Thread tools" above your first post. Post back if you need any more help.
You must log in or register to reply here.