I have been fighting with this for at least 8 hours altogether and it's driving me nuts. It's the strangest behaviour I have seen in my time of benching.
The problem is when I get to a certain clock/voltage, I'm pretty sure it's voltage related since I can raise the clocks as long as I don't raise the volts but then it's unstable. But when the voltage gets to 1.6v or higher the 3DVan GUI locks the entire system when it starts to open. Just a white box nothing appears inside, mouse freezes and we're done. Hard reset with power button. If I use reset I get an FF Q_code and need to hit power anyway. This is where it gets weird. I have successfully run 3D11, Catzilla and WP 1024 at higher voltages/clocks but as soon as I open 3DVan instant lock. Now I'll go through HW and trouble shooting.

Asus CHVz have tried bios 508, 1302, and 2002 (out of the box New Board)
FX 8350 and FX 8370 both working CPUs
TridentX 2600 CL10 good ram works fine have tried different speeds and timings.
2x 980Ti SLI and single card same results. Multiple drivers between Win7 and Win10
Samsung and Kingston SSDs
Have also tried Windows 7 and 10 both x64 installed with and without any chipset drivers or OC software
Also installed 3Dvan from USB and copied to drive with old and fresh downloads no difference in behaviour.
Only thing left to try is a different mobo and PSU but I have a hard time believing it's HW related.
I do believe it's voltage related somehow but I don't get it since other benches will run just fine at higher settings. Testing it in BIOS and OC software 1.6v seems to be the limit. Setting 1.65v in BIOS other benches run 3DVan locks up. In windows with OC SW I can raise the clocks no issue bench opens just fine. With GUI open if I up the volts as soon as I hit apply on tuner then it locks. With different bench (3D11) changing voltage in SW is not an issue.
It's not like there's any load on it aside from Sysinfo which I have tried different versions of as well as the HPET on or off no difference.

I've never been so stumped on somethng like this and any help would be really appreciated
Last edited: Dec 15, 2016

not familiar with amd goods at all- but I have witnessed intel boards that once at a certain voltage they will start taking away voltage from other areas. almost as if you can only have to much total voltage distributed around the board
OP

Thanks dejo but I would think if that were the case the other 3D benches wouldn't work either. The CHVz has the 4 pin molex connection as well to deliver more voltage to the PCIe lanes. Didn't matter if it was or wasn't plugged in.

what I encountered seemed to be software based. as once at a given amount of voltage it would just not let me have it elsewhere, and really limited my oc on a stellar chip. was at around 6.2ghz on it
OP

Well my plan tonight is to swap over to the M5A 99fx pro R2 and see. I want the dual x16. I ran a bench with the 970 pro aura with the 8370 about a month ago and no issue at all. All other parts were the same except single card. I did try this with single card and still no go on the chvz

good luck- you have the skill to take care of it, so hopefully luck wont have to have a play
OP

I'm at the end of my rope. Been talking with FM rep and he say one unique thing with the Vantage GUI is it runs on flash where 3D11 doesn't. It's all built into the executable so no way to "update"
OP

Official answer when overclocking just because one benchmark will run doesn't mean they all will. So no real help there
F

I do not know if this helps.

3d Vantage, was built on the Vista Platform.
It is an absolute NO-NO on Windows 10.
On Windows 7 X 64, try setting compatibility to Vista and run it as Administrator.

Thanks George I can give that a shot. Nothing else has worked so far. Last night, tore it down and rebuilt on a different mobo and switched out the ram. Ended up in the same boat. Still locks up above 1.6v.
OP

I finally got it and you won't believe what fixed it. The Intel compiler patch. 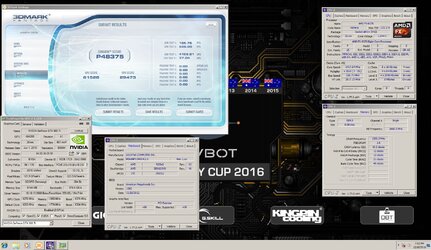