I have encountered this very strange FPS disparity in one of my favorite games, an indie rhythm game by the name of Audiosurf 2.

On the Windows installation on the platter drive, Audiosurf gets 80 minimum FPS at all times, getting up to 150.
On the Windows installation on the SSD, Audiosurf gets much less, around 60, rarely getting to 100 and never reaching 150. I realize there is little point in going over 60FPS on a 60 hz monitor but I still can notice a difference between the two and it is really getting on my nerves why identical driver versions (15.30.1025.1001-151204a-296872c) could have such a massive FPS disparity.

On the SSD installation of Windows 7 it appears choppy, but on the platter installation it is perfectly smooth.

Audiosurf itself resides on the SSD with the newer Windows 7 installation.

The hardware is identical (see sig) on both installations, with the exception of SSD vs. Platter

I have watched the load on the GPU on both systems (using Afterburner)
Audiosurf 2 only uses one 295X2 core, on the HDD system, GPU 1 is at a constant 100% load. Straight line.
On the SSD system it is much more varied, it actually seems like the troughs in the graph line up with the areas of choppiness.

Got any ideas why one game would appear choppy on one installation of Windows 7 but not on another? Seriously scratching my head at this one.

No other game I've played has a similar issue - other games perform exactly the same as they did on the HDD installation as they do on the SSD installation. Just this one sole game (which I happen to also use as my music player) has choppiness.

Here's a screenshot from afterburner, during testing of the game on the SSD system, displaying what I mean (GPU 1 Usage), the damn thing looks like a seismometer. 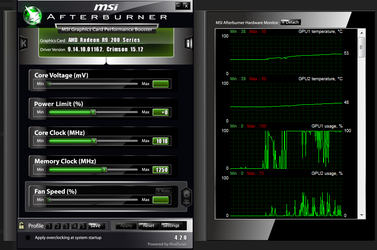 I'd check the alignment on the SSD. http://www.sevenforums.com/tutorials/113967-ssd-alignment.html
OP

Apparently it's already alligned, I did that second part and checked the SSD's current alignment, the offset is 1024kb just like it said.

Would installing the game onto the platter fix it? Instead of having it on the SSD with the operating system?

Since we do not know the root cause, we cannot answer that with any certainty... You can try it and report back. Seems like a logical troubleshooting step to me.
You must log in or register to reply here.

Screwed up an attempted dual install (kind of)