Overclockers is supported by our readers. When you click a link to make a purchase, we may earn a commission. Learn More.
I

Back in August, my Samsung 840 just decided to quit. I was upgrading to Win10 and on one boot up, everything was working fine, the next restart and the drive just disappeared. Not detected in BIOS, not detected in Disk Management. DEAD. It was just over 3 years old and was used as my Games install drive. I only installed my favorite games on it, so it didn't get very much data written on it and I was surprised for it to die at that time.

Yesterday, my Crucial M4 decided to quit as well. I was installing a case fan on my PC and on reboot, the system told me it could not find a boot drive. Great. The drive could not be detected in BIOS. I plugged it in to my son's computer and confirmed that it was not seen in BIOS and in Disk Management. DEAD. The annoying bit was that this was my OS SSD. I initially panicked as I kept a few documents on my Desktop for easy access, then I remembered that I "relocated" my user files (Desktop, Documents, Videos, etc.) to my HDDs, but was still quite annoyed that stuff like these would be working 100% fine one moment then just die the next boot up. I purchased this drive on April 2012, so 5 years of good service was a good run, but still didn't expect it just to go like that. Is this supposed to be normal SSD behavior?

As the warranty was obviously out, I decided to open up the SSD just to have a look inside. Nothing looked burnt or worn out, so I re-assembled the drive. For some reason, I decided to plug it in again on my son's computer, not expecting anything, and to my great surprise, the PC started booting up in Win10!! My son's PC has been rolled back to Win7 so I immediately knew it was my Crucial drive that was working. It's ALIVE!!!! I plug it back into my PC and it starts back up like nothing's happened! 4 freaking hours of troubleshooting, trying different SATA cables, different power cables, and it just boots up like nothing's happened!! I noticed my D: and E: drives were swapped around, but aside from this, nothing seems to have changed!

I ran Samsung Magician and discovered the new interface has less info than before... but it didn't detect any errors. SMART check via DOS prompt also declares all drives OK. I ran Crystal Disk Info and here's the result: 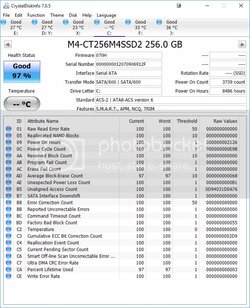 Anybody got a clue what's happening here? I'm reluctant to trust this SSD any more. My plan was to "retire" it and put it in my son's PC as his OS drive (i5 750 setup in sig below); I guess I'll be doing this sooner (next week) rather than later.

Some possibilities (though none may be the solution);

This sounds like a known issue that's been around for some time, across many SSD brands: Crucial's generic 'fix'.
OP
I

As for the generic fix, this is the first time the M4 "failed" me in it's 5 years of use. As I've been working on the PC for the past few days, I suspect maybe a static shock or some sort of power surge caused it to fail? Then when I opened it up and ran my fingers across the components, I may have "discharged" whatever was on it? Just a theory...

OR when you ran your fingers across it you shocked it just enough to bring it back to life! frankendrive! seriously i will not hesitate to open my m4 up if it decides to disappear on me. i will purposely shock it and see what happens. mine is also roughly 5 years old so whats to lose? eww i better shut up or im going to jinx my drive. knock on wood.
OP
I

I've now dug up my old Samsung 840 SSD, plugged it into my PC, and BIOS can see it, but Windows can't. Any suggestions?

I suspect the motherboard. Do you have a spinner you can plug into it?
You must log in or register to reply here.

ssd under performing. something wrong.

SSD seems to be dying, any way to fix it?

Feb 22, 2022
ezcharlie
E
W
What is Sabrent like for honoring their warranties.