Stuff PC / Raspberry Pi components into a PS4 shell? Getting a PS4 kiosk

I was wondering if it was possible and or if someone had attempted it to stuff a PC inside of a PS4 shell? I'm sure one of those micro PC motherboards would fit but I have no idea about the rest of the components. I'd be interested in buying a non-working PS4 unit and putting a PC inside of it but have no idea of the viability of the project. My biggest concerns would be the heat and power supply. Any ideas?

In case you all are wondering I may get one of these next week and wanted to turn it in to an emulation kiosk instead of a straight PS4 kiosk. 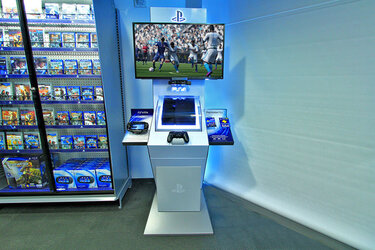 With that much room, can you just build a rig in the kiosk and mount the GPU (via PCI riser cable) in an old PS4 shell?
OP

Alaric said:
With that much room, can you just build a rig in the kiosk and mount the GPU (via PCI riser cable) in an old PS4 shell?
Click to expand...

You know, you're a genius. I don't know what the inside of the kiosk looks like but that might be an alternative. Where do I get one of these riser cables, and what all formats does it use (PCI-E, etc)? Lastly, can I piggy back these cables to extend the length.

A veritable rainbow of sockets and colors https://www.newegg.com/Product/Prod...=pci-e+riser+cable&ignorear=0&N=-1&isNodeId=1

So a little update. I got the call to come pick both of them up on Sunday Feb. 20th. Behold in all their glory. My only concern is how to mount a TV because it doesn't look like a standard mount--and after looking closely at other PS4 kiosks in the wild with the TVs I see that the TV mounts are indeed bespoke to these units and I'm not about to drill them. That would really lower the value. I'm thrilled that they power up and the lights work. Now I just need to buy at least one PS4--at some point. LOL I may be interested in trading one for an XBOX 360 kiosk someday. But for now I got some work to do cleaning them up and figuring out the TV thing. I'm interested in turning one of them in to an emulation machine for our movie theatre upstairs and an actual PS4 kiosk in the game room/office. For the emulation machine I'll probably just use a Raspberry Pi and now that I've found out that the PS4 units you see under the glass are actually dummy empty shells only meant for display. The actual working PS4 is put inside the drawer--which surprises me that the front opens up like a drawer. I don't have the key but the contact I got them from was kind enough to unlock them so I could open them up when ever I need to.

So my need to use a PS4 shell for the Raspberry Pi is not needed now, but, I turn my attention on what the best way is to mount it inside this drawer. Does a PS4 controller work on a Raspberry Pi/PC? I'm assuming bluetooth? I'll probably use one of those controllers if they work on the Raspberry Pi and if they don't I'll see about using an XBOX One or 360 controller instead. 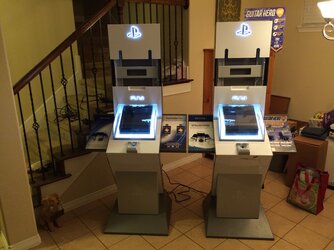 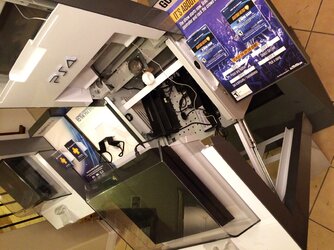 P.S. I'm so happy all the lights and cooling fans in the back work and that I was able to get both. Only cost me $75 a piece. Score!

After looking at some ps4 kiosks on Google, I guess the next question is "How big"? What size TV are you looking to put up there? If the same size screen as the original is your goal it will be harder to hide the mounting system. I don't know how much of the back board you'll be looking to cover.
OP

Alaric said:
After looking at some ps4 kiosks on Google, I guess the next question is "How big"? What size TV are you looking to put up there? If the same size screen as the original is your goal it will be harder to hide the mounting system. I don't know how much of the back board you'll be looking to cover.
Click to expand...

Thanks for replying! I'm going to move your question over to my specific topic on this.

I can do that if you want. I was comparing pictures and accidentally answered the wrong thread. DOH!
You must log in or register to reply here.