Suggestions for my recent problems with my 5950X

EarthDog said:
...and it still didn't capture w/e was causing the 'spike'. It reads the UPS... the UPS 'caught' it, but no devices are out of line power-wise. I wonder if you left Hwinfo running for a lot longer, that it would catch one of those spikes? Like the GPU says 500/600W.... or something? To me, you're missing a couple of hundred W somewhere to make that come true... I don't know. I believe you're seeing 600W or so (500W between CPU and GPU and 100W for the system) actual system use. But even adding inefficiencies, fans/HDDs/pump etc., just doesn't add up (and it could all be in my head) to 1.1KW.

I agree, which is why I added in the Kill-A-Watt to get a 2nd reading. I'd also add in a clamp power meter, but I don't currently have a spare power cable I'm willing to cut up so I can clamp the hot wire and see with a third measuring device (I plan on making a cable of my own for this once I get the RaspverryPi monitor in).

Although, I do have to say that the MB taking 200W+ is realistic to me. 5W on a X570 chipset? When it requires a dedicated fan of its own because it can easily pass 80C on a chip of that size without one, there is no way its just using 5W.

What happens when you don't use the UPS?

Mpegger said:
Although, I do have to say that the MB taking 200W+ is realistic to me. 5W on a X570 chipset? When it requires a dedicated fan of its own because it can easily pass 80C on a chip of that size without one, there is no way its just using 5W.

I had a 5W mining ASIC that burned my fingers without a heatsink... it doesn't work like you're thinking. A yellow flame on a lighter is the same temperature as yellow flames in a huge bonfire... which has more energy and more difficult to cool?

Worth noting, x570 didn't really need a fan in the first place. All the 2nd revisions don't have any and the heatsinks aren't really any beefier. It'll take a bit more than a 2" around 1/4" thick piece of metal with some ridges on it to cool 200W IC... nor can a cpu be cooled in the same manner... something that actually outputs 200W.

EDIT: For clamping meters, don't you put the cord between the clamps? I didn't think you needed to skin it to get W readings off them.
Last edited: Mar 31, 2022

There is no way your board alone is drawing 200w. FWIW running [email protected] on my CPU and GPU, both overclocked, can do 640w on my meter. Do you know how hard it is to try and cool 200+ modern watts? It is intense. At least 7nm.. Not like trying to cool 200 old school watts. I would try without the UPS first, if that doesn't help, I would take a closer look at whatever tune you put on the system.. specifically memory. And a closer look at your VDDG's and SOC.

Mpegger said:
Although, I do have to say that the MB taking 200W+ is realistic to me. 5W on a X570 chipset? When it requires a dedicated fan of its own because it can easily pass 80C on a chip of that size without one, there is no way its just using 5W. 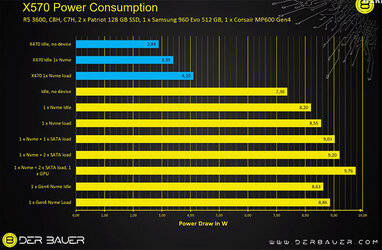 Mpegger said:
Btw, the Kill-A-Watt is connected directly to the PC, after the UPS.
Click to expand...

freeagent said:
What happens when you don't use the UPS?
Click to expand...

Like we said previously, take the UPS out of it and just put the PC on the KaW...let's see if the system w/o the UPS still spikes. I know it updates at once /s but, you shouldn't see huge spikes to 900+ W with a system that's actually pulling 550-600W max.

We aren't prone to brownouts here, but they do happen from time to time. If you don't need the UPS, don't use it. It doesn't seem to be able to keep up with the action anyway, so set it free.. I do use a line conditioner on my main rig, but my second rig is just plugged into a nice power bar. Works great. Good luck!

I like that ED, a "cheap" 850 Ti unit.. I have been on the lookout, I did notice steep PSU price drops all around.. 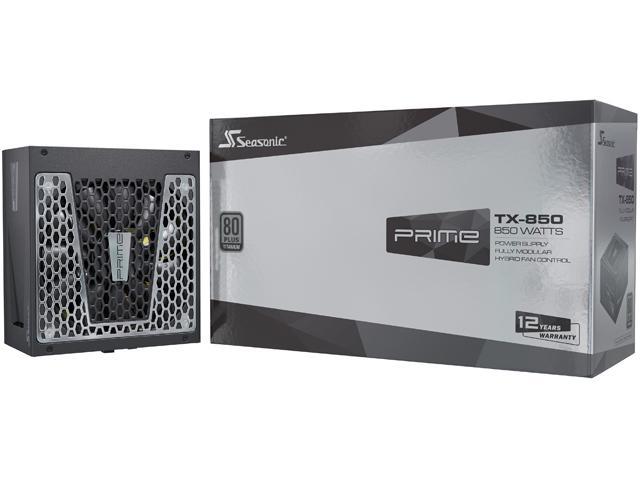 That's a 300 dollar PSU up here in Canukistan. Newegg.ca is showing 100 bucks shipping on it which at that point might as grab the KW unit with 7.99 shipping lol. It should be free to 8 bucks to ship normally. I do see they have a GX850 for 135

Mpegger said:
I'd also add in a clamp power meter, but I don't currently have a spare power cable I'm willing to cut up so I can clamp the hot wire and see with a third measuring device (I plan on making a cable of my own for this once I get the RaspverryPi monitor in).
Click to expand...

I have a splitter for taking amp readings from a cord without the need of ruining a cord. It has a 10x multi to get the reading into a higher, more accurate range of the meter. IMO anyone that owns a clamp-on amp meter should own one of these too.

So, I finally got around to wire up my own plug for a clamp meter. I power down and disconnect the PC, throw in my wire so I can use my clamp meter, get a tripod to film the meter annnnddddd...

Now suddenly nothing is showing more then 900'ish Watts being pulled from the wall.

I tried throwing Cinebench all threads alongside MSFS 2020, and it was a steady 6.8xA on the clamp meter, 816W from the wall, 718W from the PSU the majority of the time. I tried Furmark along with the CPU coin miner, Rust, VMs running in the background, all combinations of loading my CPU and GPU as much as possible, and was only able to get a handful of spikes in the low 900Watt from the wall (which is only around 820Watts from the PSU). Between previous testing and this round of testing the only major thing that changed was that I powered down the PC to include the plug for the clamp meter, so I have no idea why I'm no longer seeing 1kW+ spikes on anything.

Still, 718W steady still is more then expected from this system, and those 820W spikes this round of testing are still pretty high imo for a near 8 year old PSU.

I'm going to be spending this week slapping on the water block for the GPU and redoing the water loop, as well as switching out the PSU for the Corsair RM1000x I now have, so no more testing until after all that is done. And of course, with a change of PSU, it wouldn't be the same results, or at least I wouldn't expect the same results, but we'll see.

718W is a lot more than expected out of that system. Are you measuring the UPS cord or PC only?

UPS, Kill-A-Watt and the clamp meter. Again, the Kill-A-Watt already read around ±20W of the UPS, but since the UPS samples and updates 4x faster then the Kill-A-Watt, it could show those transient spikes (and dips) that the Kill-A-Watt wasn't showing. Just for some reason now everything seems to stay at a steady average and isn't jumping all over the place like it was before. I know what I saw, and it's been like that for weeks (months now), but like always when one tries to actually show the issue, that's when things seemingly go back to "normal".

I edited a bit up there, note.

Have you taken the ups out of the equation to measure... the kaw, or your meter? I know a couple of us were wondering what readings were like that for a while now.
Last edited: Apr 3, 2022

The readings are the same regardless if the UPS is inline or not. So no, the meter on the UPS is not reading wrong if that's what everyone is thinking, it's just not accurate to the single/double digit because of how its been programmed as I described in a previous post, but it's still somewhere around 3% tolerance, much like my clamp meter.
You must log in or register to reply here.