I've been wanting to build a retro system for a while but I didnt want another big honkin tower right now so I got some hardware that goes in a bit of a different direction. SBCs 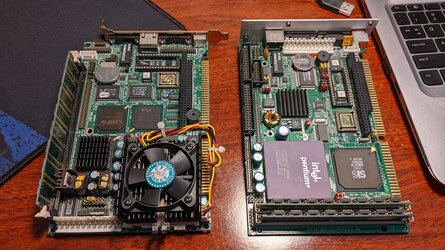 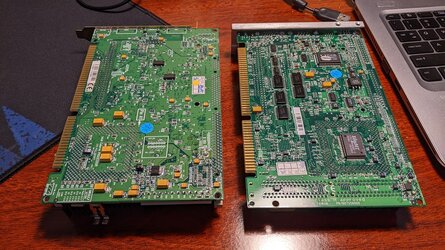 I got these for super cheap, the one on the left needs a tantalum cap on the back of the socket replaced, you can see it was ripped off some where although the seller said it worked regardless.

But i need a case for these, something small. i thought some one some time ago made external housings for PC cards and small PSUs but I'm either not looking up the right thing or they dont exist. I remember having a sun microsystems external scsi drive that was sort of like what i imagined, it had a PSU in it but the case wasnt off the shelf suited for PC cards.

At this point i'm kinda looking for any thing that can fit these, i could do external PSUs if need be. It wouldnt matter if it was a single slot or two or three, there is some expansion on these cards.

some insight on these and what i'll use them for.
well mainly i'll use them for DOS, Win95/98 stuff. probably not any D3D things but maybe depending on what i find when i probe these a little more. probably use DOM or a CF to IDE adapter and a floppy emulator. these have most everything else onboard so unless i need to add anything the'll probably be run as is

the one on the left is a socket 370, i think it has a celeron installed but i have a few pentium 3's stashed away, 133Mhz 128MB DIMM . every things onboard, 10/100, USB,video, Sound, HDD, FDD, it almost all headers, even some funky tiny IDE looking LCD connector. I think its kinda interesting that its a socket 370 with an AT PSU connector, i think it was designed mainly as an upgrade board.

the right one is a Pentium 133, I think its a socket 5, but i'm hoping its not. again, everything onboard, this one came with 16 megs SIMM installed, not sure the speed, i see a j-60 so maybe 60ns? I wish it was EDO, i have a bunch of that still, i dont have many of these older SIMMs.

I love me some retro computing! Keeping and eye on this...
OP

might be a little bit. i'm having trouble finding a suitable case

Desktop, I use one in my wall. Get one thar can fit a component stero rack.

i still want to go smaller than that, i might have to build my own and i wont be able to do that till i move into my own place, but i'm keeping an eye out for what i was thinking in the begining
still in between places at the moment.

since these cards are so small i wanted to keep that smallnes, i might add a card but nothing major so that why i was thinking two or three slots. i thought maybe a stripped eGPU case but none of those are cheap but i'm still looking

I’m confused, can these add-in cards work stand alone or do they need to be plugged into a motherboard? Never seen one before, but it looks fun to play with. What kind of slot is that, looks like Vesa but not. lol
OP

its a 16 bit ISA slot and these can work standalone if they need to since they have their own AT PSU connections.
i'd probably use a slim ATX psu with a converter to use it on these and hope these dont need -5 and -12 rails

i knew it existed