Hi guys i have time to lose so idecided to make a computer case with my friends yay +_+
It reallly really big. enough place for a cow...
22x12x23 (L x W x H)
And I need some help putting fan on the side pannel dont know where to put them etc.... 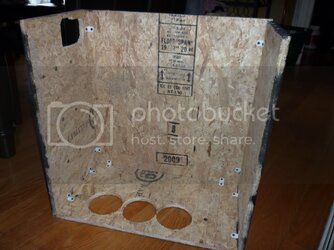 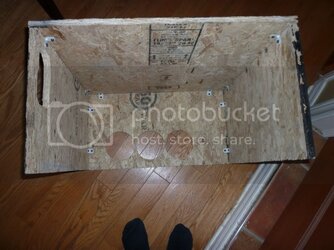 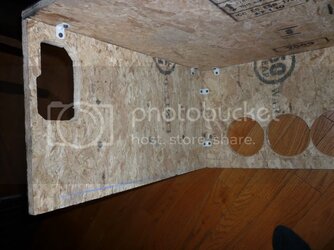 here is some pic i made a power supply hole and raditor hole made.
What i want to do : 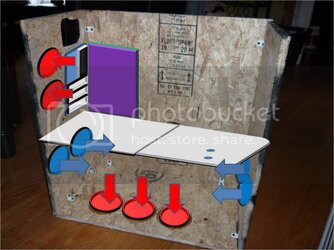 Is that where the fans are going to go? If so, I don't think that is a very good setup for good airflow. I think you would have much better results if you had the air all flowing in one direction, like from the front to the back. The way you have drawn it looks like there will be a lot of turbulent flow, which would lead to reduced throughput (total air moving through the case). Also, the top doesn't appear to have an intake.

Another thing, I would think you would have better heat removal if the fans were more directed towards your motherboard. What happens is that the molecules in the air collide with the components surface, and in doing so transfers the thermal energy to kinetic energy of the molecules. So you want to do two things, have the air collide with the surface, and have a way to remove the heated air.

I haven't built any cases, so maybe someone who has will be able to offer some more definitive tips.
P

Is it going to be mounted that way? I wouldn't force heat to escape into the floor, even if you life it off the ground, it still wont be as efficient as having it open.

Another thing, your making it out of wood? That's a bad idea, unless you plan to cover the wood on the inside with metal.
D

PrinceyJ said:
Is it going to be mounted that way? I wouldn't force heat to escape into the floor, even if you life it off the ground, it still wont be as efficient as having it open.

Another thing, your making it out of wood? That's a bad idea, unless you plan to cover the wood on the inside with metal.
Click to expand...

What is bad about the wood?

Once sanded and treated, nothing is wrong with it.

Personally I would not have gone with chip board...

Also did you check your rad holes? The circles are overlapping so pretty sure you are not going to fit a rad on it. A fan is not just the size of a hole there is also the fan casing to consider. Plus depending on your rad the difference between mounting points varies as well.
OP

sry +_+ what do u mean my chip board -- im french canadian and idunno what its mean ---
ACtualy the fan and the hole will be good enough i made some mesure from the swiftech mr320 size etc....i will see if its work when i will have the rad. ( in like 2week )
if its not working i will just cut with dremel to make it works.
as I said is not finish yet so i accept all idea from ppl +_+

will the fans be mounted to the case first then the rad? Or will it be the rad mounted to the bottom then the fans? If it is the first one i stated you dont have the right spacing to mount the fans first. with the second one it should be doable since the fan spacing then wouldn't matter. you could then just drill the holes for the screws...
OP

Rad first then fan since i will using a lot of fan i wont put 6fan on the radiator +_+
You must log in or register to reply here.