The stats came out late which may cause some people to not get the recognition that they have earned. Many apologies to those who may have fallen through the cracks.

Team Spotlight:
Normally we like to post happy stuff and lately it has been very easy to do so. While not happy, this news is not alarming. On the 26th of March, we had a sizeable dip in production of just less than 60 million ppd. That’s 9 million off our current pace and nearly 20 million off from our pace the week before.

What does this mean? This is probably an indication that the summer heat is coming on. Our friends in the south will have to slow down or shut down until cooler temps come around. This is a good time for all folders to look at their rigs and plan their annual cleaning of fan, fins and loops.

The other teams will also start to slow too so we should be able to maintain our current standing. It would be nice if we could implement a “late breaking” move as in auto racing where we allow them to slow before we put on the breaks. It is understandable if you do have to shut down. It is better to save the gear for the full race than to bust it in a sprint.

Forum Spotlight:
Much to my chagrin, WhitehawkEQ is building a new folding rig that has the potential to vastly increase his already high potency ppd. While it appears that he is holding back on the true muscle of the build, it has a lot of potential that is far from accidental. Look here to shut him down cheer him on. All joking aside, WhithawkEQ has come in full bore with both feet, hands, head, torso, etc. He is really dedicated to the cause and to the team. Thanks WhitehaekEQ.

Team Threat List:
None. There are no threats because we Rock and/or Roll! (Simpson’s reference)
(Higher is better)

For the second week the loss in ppd from the top 10 was picked up by the top 20. Great job. We’ve heard from HayesK who had stated that he will not be able to get his farm up and running again until later this month. We sorely miss his production and look forward to his triumphant return.

World Top 100:
We see some big movement here which is really saying something.

The main reason for the big drop is HayesK's farm is temporarily down. It will be a couple of weeks before he is back up.

Not Don who, Don Ho. 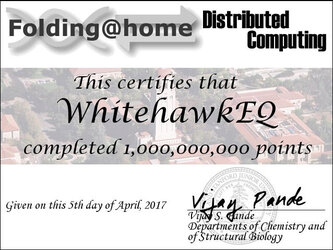 That is not a small number.

Soulcatcher668 said:
That is not a small number.

Congrats on the pass, by the way. Its so warm that I can't push any more PPD unless it cools off.
You must log in or register to reply here.

T32 EOC WIR 12Mar21: Not as short as I thought but definately late.