Last Week Update.
Soulcatcher did some fool thing and managed to get himself some competition to page 1 for the team. hshtick was coming up strong and Soulcatcher made some remark. Later remarks woke Clint, cmatties and Jerk who have all risen up to take the challenge. It looks like Soulcatcher may indeed beat everyone to page one but only because of his massive point lead. The rest of the pack has hit the ground running, going the whole 10 yards and hitting a home run with production gains that are impressive to say the least.
(If you have other metaphors to add here please do so in your replies.)

This group has shaken up the top 20 ppd rankings.

Forum Spotlight:
One of our “heavy hitters” has a very cool and very big machine to play with and it is producing some real points. Too bad it’s just temporary but still… Will he be our team’s #1 ppd producer for a while? How far up on the world page 1 (top 100) will he go? All this and more….

Look here to see what he’s got going on:
http://www.overclockers.com/forums/showthread.php/780342-Hardware-Burn-In!

For the record, I did not have to look here to see what it was:
https://en.wikipedia.org/w/index.php?title=High-performance_computing&redirect=no

Then look here to see the results yourself:
http://folding.extremeoverclocking.com/user_summary.php?s=&u=175978

Team Threat List:
None. There are no threats because we Rock and/or Roll! (Simpson’s reference)
(higher is better)

We have fewer 1 million ppd earners but our entire top 10 are earning 2 million ppd or better. That is possibly a new record for the top 10. WOOT!

Jerk just earned his first 10 million and will earn 20 million in 4.7 days. WOOT!

There has been a lot of great movement and new milestones. Thanks guys.

Moving up 3 spots each:
Nihilus

World Top 100:
We are seeing that a few of these guys have battles going on. Week by week they move up a spot then fall a spot then move up again. These battles are really close and with extremely high point gains. Keep routing these guys on as they are in very contentious battles.

Slight correction, I moved DOWN one spot to 59.

I'm > 1m ppd, when you consider the first full day of folding was Sunday (Feb 26). My production will decrease over the next week, until a new surprise (may) present itself. Hoping for continued cool weather so that [email protected] doesn't make my office unbearable.
U

Thanks for your feedback.
Im under a 1,000,000 PPD.
I will away from home from this Sunday Evening until Friday or so.
My folding rig will be offline.
Tks
OP

torin3 said:
Slight correction, I moved DOWN one spot to 59.
Click to expand...

Staying in the top 20 ppd is getting to be a challenge on this team. This team is pushing hard!
OP

Nihilus said:
Staying in the top 20 ppd is getting to be a challenge on this team. This team is pushing hard!
Click to expand...

That's the truth. Any team that looks at our active folders number might be lulled into thinking we are weak but we are far from that. We have a lot of folders who are making great points yet aren't in the top twenty just because we have such a large number of strong folding farms. If your not in the top 20, don't dispare, you are still making good points for a good cause and you are a full member of the strongest little team out there.

We need another chimp challenge

If I could keep my internet connection up and everything stayed running I'd be at 1.8-2m ppd, but still not in the top ten... 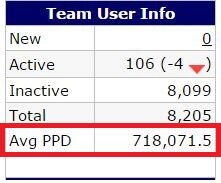 RamonetB is throwing off that average right now with his single 12 - 16 million ppd machine.

Check under the "Forum Spotlight" above for more information to his limited use of a super computer to fold on.

don256us said:
RamonetB is throwing off that average right now with his single 12 - 16 million ppd machine.

Check under the "Forum Spotlight" above for more information to his limited use of a super computer to fold on.
Click to expand...

pfft.... he is getting a measly 10 million PPD bump. What could that skew?

I under-produced last week semi-unexpectedly. I tried for a couple of weeks to get the R9 running on my Linux box. Nada. There aren't any drivers or hacks that I could find to make it happen. Then a friend's business PC crashed and I gave him my Linux MB to keep him from being down more than a day (Haswell MBs are as pricey as Kaby). Last week I took down Unit 1 to install the R9 in it and encountered continuous crashes. No amount of driver swaps helped. The Event Log reported Kernal Power errors. I'm convinced, without more math, that my MB isn't beefy enough.

So I'm back to a more routine daily production, out of town a couple of days this week already (1160 miles in two days including 5 client visits), and am roughing out my next [email protected] move.

Well after some lovely cool weather the hot weather has come back with a vengeance here in southern California so it looks like I'll be shutting down production on my 2 gpu's when I get home this evening . Highs for 89 today and into the 90s in a couple of days. My production will be limited to the couple of cpu clients I have running at work so about 20-30k ppd
OP

Winter is always fun. Summer is for doing general maintenance and getting ready for winter again.

Unfortunately for me winter only lasts about 3 or 4 months

the_cultie said:
Unfortunately for me winter only lasts about 3 or 4 months
Click to expand...

There is a solution to your issue the_cultie.......

Soulcatcher668 said:
There is a solution to your issue the_cultie.......

The beer is cold and I have a toque standing by....
Click to expand...

I love it! And I would love to, don't think my girlfriend would appreciate the cold, I for one miss the Irish winters
You must log in or register to reply here.