Team Spotlight:
We now have nine (9) months in a row where we have collectively earned over a billion points in a single month. WOOT! Please don't take this achievement lightly or your contribution lightly either. If you earned even one (1) point during this period, you helped and we kicked tail! Great job. Feel good about this because we earned it fair and square. Very few teams can boast we do and it was you who did it.

Forum Spotlight:
This week let's talk about the importance of our user names. For example "don256us". Why did I choose that name. The answer will reveal a few things about me most incriminating is my general age. "don" because my name is Don. "us" because I live in the United States. Now here is where you can tell the most about me. "256". 256 Mb was a lot of RAM in a computer system at the time. From this you can guess that I am a computer fan and the number gives you an idea of how long ago I selected the name.

What's the meaning in your user name? Your tag? Your handle?

We still have lots a great movemt in the lower ranks which is awesome. Keep it coming guys!

Ozzlo has moved up 6 spots.

Nihilus has moved up 5 spots.

Macaholic made a great stride this week in the world rankings. RamoetB also moved up. Very tough group to rise in so gongratulations guys.

Congratulations to everyone on their hard work and earned goals.

JrClocker...because I wasn't a Senior Clocker when I joined the forum!

P4EE and Torin3...you guys are in trouble! My second Titan X P is installed and happily folding away...earned 3,587,000 points yesterday...muhuhahahahaha.

WhitehawkEQ...I can't catch you unless I decide to put my 980 Ti back into my rigs. I would have to update the motherboard in my second PC...and be comfortable with increasing my electric bill by another $27 per month...not sure if I am willing to do this!

My goal for this year was to increase my folding output without increasing my electric bill. I have been successful...currently folding on 2 x Titan X P and 1 x 1080 FTW!


Keep up the good work guys!

JrClocker said:
WhitehawkEQ...I can't catch you unless I decide to put my 980 Ti back into my rigs. I would have to update the motherboard in my second PC...and be comfortable with increasing my electric bill by another $27 per month...not sure if I am willing to do this!
Click to expand...

Now Jr, I told you not to make me get out my violin, I'm still looking for it,

WhitehawkEQ said:
Now Jr, I told you not to make me get out my violin, I'm still looking for it,

Keep up that talk and I may have to fold under Jr's name.

Thanks Don for the stats, I'll give you guys the skinny on my username. I was hired to work at a local computer store called CyberExchange back in the ancient 1990s simply because I knew Macintosh -- the other tech was a huge SNL fan of that skit where they would toss around a bunch of nicknames (and he used several on me) like mac-inator, mac-a-meister, etc. until he came up with Mac-house-ta which I never really questioned. He did model rocketry in his spare time, so I always thought it was the jet fuel fumes talking.

We used a Mac Portable (Luggable?) as our 'test bed' for mac software until OS 7.5 came out and nothing would run on it any longer.

Best computer I remember building for a customer was an Asus dual pentium pro with a 4mb S3 Virge and (later upgraded) with two Voodo 2 cards, if that helps to determine how long ago it was.

Jerk (my folding name) came about from my wife putting it on anything and everything that requires a name but isn't important -- like the bowling scorecard, the min-golf scorecard, anything she can find.
OP

That is awesome. Thanks. My first real video card purchase was a VooDoo 2 but it did not fit into the Gateway 2000 (yes 2000) desktop did not allow the card to fit so I got a S3 Virge thinking: "what's the difference. This one fits so its just as good."

You think that's old school? Take a look at these cards 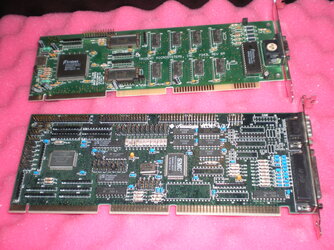 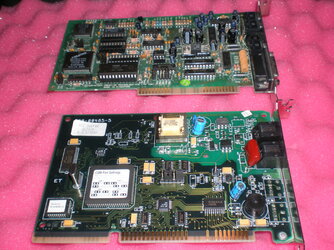 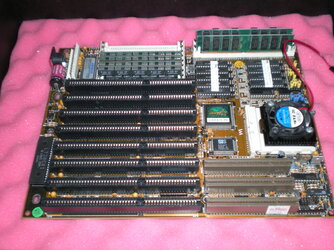 Only 1 Vesa local bus video card, the other VLbus card is a I/O card with 2 IDE channels and 1 floppy connector, 1 com port and printer port, the MB is a 486DX VLbus MB.

WhitehawkEQ said:
You think that's old school? Take a look at these cards

I wonder if I can fold with the GPU and CPU?