Temps for a 4790k with current gen watercooling ? Need numbers to compare plz

Overclockers is supported by our readers. When you click a link to make a purchase, we may earn a commission. Learn More.
OP
C

Yea its like 13 years though since I purchased this radiator. Its a black ICE radiator.. not sure if its the extreme or normal one I honestly forgot.

EarthDog said:
It would be helpful to know your ambient temperature, and what cooler you are using....

(if its not the same, then it isn't applicable information for the OP I hate to say)
Click to expand...

Yeh - Sorry I forgot to list my ambient temp at time of test. My motherboard temp is always only 2 to 3C higher than ambient so my ambient would have been around 21C at the time of testing.

The main reason for my post was not so much for the temps but more so for the OPs request in regards to the voltages that I am using for my 4790K's overclock. In particular the difference between idle and full load (P95 v28.5 Small FFT testing) voltages.
OP
C

21c ambient is pretty cool yours room is 11f cooler then mine.. Just for ****s and giggles I measured my walls and carpet in my room using that inffarred gun as I said it was 80f, and my brothers old room next to mine was 73f, the master bedroom was 71f.. You can see how much warmer these fish tanks make my bedroom sadly.


Hey question for you guys, do they still make solid silver waterblocks ? I know back then when I was first getting into water cooling, my first water block was a maze 2 then this maze 3, and then a maze 4 came out and so forth and Dangerden started to experiment with all silver blocks, since silver is well more expensive but also a better metal for heat exchange then copper

EK make a 'Gold' block but its only for looks as while the block is plated on the outside it is copper on the inside.
OP
C

lol a gold block.. I can only imagine if it were solid gold... how much that would cost. I wish I had a tool to measure the thickness of my maze 3. Perhaps I could gauge how thick it truly is from inside to out and lap the block down some to try and increase its cooling.
OP
C

Well turns out the block wasn't sitting right. I took it off and it looks fine Arctic silver 5 is all over.. so I wiped it all off because there was too much on it and I put a super thin layer on to test if the block really was sitting right.. Its only touching on the left and right sides (or top and bottom if your case is standing up.. And the entire middle wasn't touching. Like literally only 2-3 mm on the top and bottom was touching and the whole middle and left and right wasnt.. I decided to get some flat piece of 16 gauge steel I used to fix my Jeeps floor board as its very flat and I got some 230 and 320 and 400 grit sand paper and wet sanded the block for like 40 minutes and tested it again and pressed the block on and tightened it and took it back off and now its covering the middle..

Whoever suggested the block might not be making contact was right.. This could explain why my water and the block weren't that warm when on load.. Im still not 100% comfortable on the contact as it wasn't 100% still.. So I decided to just sand the top and bottom parts of the block where the cpu heatspreader was touching to sand it down and tried it one more time and now its better.. , it was touching on the middle but still.. Im curious why the block wasn't flush on this cpu yet was fine with my C2D and my Athlon 64 which all had heatspreaders on the cpu's. Im wondering if the actual heatspreader on the cpu isn't flush.

Sometimes the IHS is concave or convex.
OP
C

Yea 40 min lapping the block with a low grit sand paper and it didnt help contact much so like you said im starting to think the IHS might be the uneven part and not my block.

I never liked IHS anyway. Yea they eliminated the part of chipped corners on your cpu die but they also cause problems like this.

Id lap the cpu IHS as well but with the cpu being 340$ id rather not break warrenty lol at least not yet. So ima sand the block more on top and bottom to counter the curve.

I dont think i need to overclock this cpu for video games anyway.. Was messing around in witcher and others and my fps litterally stays the same in those games.. I found a spot in the games where my fps dips o.ced to the cpu to 4.7ghz using the gigabyte utlity in windows.. fps stayed the same from 4.4ghz.. I dropped the multiplyer to 25 for 2.5ghz for kicks and same thing to my surpise the fps was the same in 3 of my video games.


So that tells me im gpu bound.. which is interesting even on planetside 2 which is a cpu game. Maybe when amds new graphics cards come out if the price lowers on the r9 290 ill try my hand at crossfire.


Found this thread on google and others, seems a lot of the 4790k are concaive and they aren't level, at least I know it isn't my waterblock.

Here is a picture of how poorly the contact on the cpu is... See the big air gap lol ? And you can clearly see im using plenty of Arctic Silver 5. In fact I was using too much right there and it still wasn't touching the middle of the core. What do you think ? Should I lap the IHS ? That's a pretty big $340 gamble on losing my warrenty but that gap is kinda big 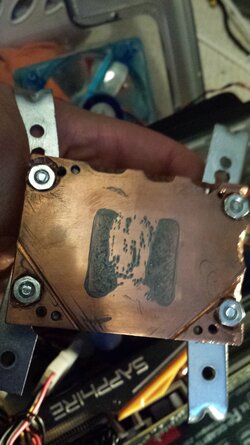 B
AIO Eisbear gunked up?