Thank you for attending this meeting that I called.

Thank y ou for coming. I know you're busy so I'll get straight to the point. (by not doing that.) We have had some concerns and issues and we just wanted to clear the air. Please close the door and have a seat.

1st. We are chasing three teams: Hardware.no, PC Games Hardware and PC Master Race. We are being chased by Element AI Inc. It's been the same for 2 months in... 3... weeks. In 3 weeks it will have been 2 months. Give or take.

WhitehawkEQ has really been pushing HayesK in production. Been a great watch in the stats.

We have 0 new users but we do have 4 more active users which is.... ..... AWESOME! This means that people who took a break are coming back in. WOOT WOOT! Huza! and whatnot. Always happy for winter when we see teammates come back. Hip hip ouch my hip hurray!

In terms of active folders compared to other teams, we are tied with 41 active folders at 48. Meaning that there are 47 other teams with more active folders. We are still 10 in the world for total points but the 41 of us will have to work harder. Now teams like Element AI Inc are using less members but much more resources. They have 3 active folders but thier top folder is earning 729 million ppd. Hard to argue with that. Feel free to argue it. I'm not trying to be your Dad or nothing I'm just saying that it'd be hard to do so.

If you guys have any ideas on boosting membership: I've been offered several times to post on the main page but that's responsibility. At least in here I only have you knuckleheads to make fun of me. On the main page... who knows whos out there.

Congrats on the "Stones mates..

I started my Windows PC folding this morning as it has cooled off(weather). Dramatically less PPD than the Linux PC but it's something.

Check my screenshot in the other thread I was doing almost 9 million with an RTX 3080 before I pulled it and sent it out 4080 got to do at least 10... not on every wu but on the good ones.

Fired the folding back up a few days ago, things finally cooled off enough. Ironically today the daughter's video card crapped out (my old 770). Wow, this should've been an opportunity for an upgrade for me. Could've taken the shot, but we've been hit with some unexpected expenses of late, I was a good boy and a bad team32 member. Ordered up a 1660 for her, that was alot cheaper than a 3080 for me. Maybe she'll let me run some folding on her pc and boost my production a bit. Probably not, she doesn't like how that makes her pc "blow lots of air" lol. 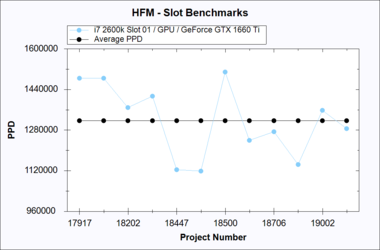 how do amd gpu's do on FAH?

I started folding on my RX 6800 XT & it is doing about a quarter of what an RTX 3080 will do. I don't know if I need to set certain flags to increase the PPD, just running a default GPU install on Win10.

AMD doesn't do well . I think its the Cuda cores.

i am wanting to help the team, i see some good deals on Dell branded 1660 Ti's on ebay. how ever i am really worried now about buying used gpu's after mining season ended. lowest so far on the dell ones is 130 one guy has 2 left at 145 each. sounds like a good cost effective gpu/ppd card.

The next electric bill will tell the tale on whether I reach my goal of one billion points, by the end of the year.

any word on people using intel arc under Linux?

take away, wait for intel to get the linux drivers sorted after windows. wonder after then if Arc will be added to the supported gpu's for FAH.

What, do they care? It is your money you are spending, and it is none of their business.

Mark620 said:
What, do they care? It is your money you are spending, and it is none of their business.
Click to expand...

For now it's a friendly reminder. Wait until the power company calls the DEA to report a suspected grow house. Dave, you got some esplainin to do! lol
You must log in or register to reply here.