Used the Rockitcool 88. It took like three pulls on the allen wrench. Look how little TIM there was. The die is practically clean and you can see the IHS through the TIM on it. Wow. 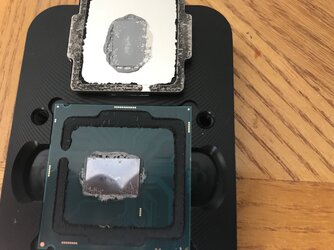 Ready for TIM and then relid. 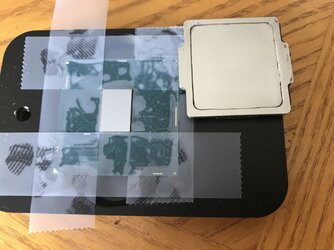 Some Liquid Ultra and a dab of superglue gel on each corner. Now just to wait a couple of hours. This is my friend's CPU, so I better have no messed it up. This was so easy, I think I'll do my I7-6850K right now. 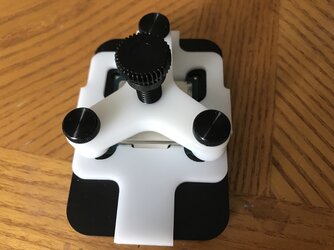 BTW, if I just gave you a heart attack. I know I can't delid a 6850K. First off, it doesn't fit in the tool and more importantly, I'm not ruining a CPU with a soldered IHS.

Do you think Intel would notice it has been delidded? I doubt it since their tech support told me to remove my video cards and plug the video into the motherboard when I had a bad 6950X. I should have kept that going for days instead of telling them right away a 6950K is a 2011 socket and doesn't have IGP. The 6950X is no more. At least I got almost 1400.00 for it on Feebay. Freaking charging 10% on shipping charges because bad sellers would sell something for .99 with 250.00 shipping to avoid the FVF.
Last edited: May 21, 2017
OP

Much better OCCT Linpack temps. From 60 to this. 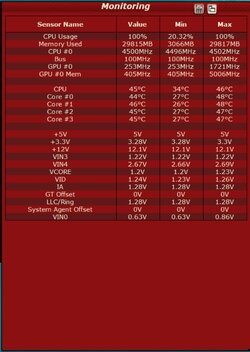 Nice, delliding can do wonders on some of these chips.

Lochekey said:
Nice, delliding can do wonders on some of these chips.
Click to expand...

The Kaby Lake CPU's have absolutely no transistors or anything in the way. I suppose you could cut into the tracers with a blade, but nothing better than 30 minutes from popping it in, delidding, and relidding. In over an hour, the temps are the same and that's with an H100iV2....my benching cooler. It's just as good as high end air and much easier to take on and off. I never had the...male parts, to use a razor blade or especially a freaking vise to delid. Nothing easier than turn, turn, turn....pop. Cleaning off the old glue is the most time consuming part. This IHS wasn't 100% clean, but it was good enough. Pictures make it look worse than it really is. Got a little super glue on the IHS, but the scrubbing pad took it right off. I wish you could delid a 2011. I watched a YouTube video where someone designed a tool, but they never showed the CPU working. Now comes the scary part. Hardline tubing the system. I can do regular water-cooling in my sleep. but this is a new one on me. It takes me back to my first water-cooled system in 2005.

There was enough paste to cover the die, until it was popped off...it came off clean.

pretty sure you dont want to try to delid the 6850. are they not still soldered?

i've really been considering doing this to my 6600k. seems to be worth it.
W

Depends what are you expecting. It won't change anything if you run your CPU at lower clocks. It will give you 10-20°C better temps but again, if CPU already has good temps then it won't change anything. On my 7700K I see about 12-13°C lower temps using thermal grizzly paste so I assume it would be better with liquid metal but I'm planning to run it on sub 0 temps so I'd rather stick to grizzly or gelid extreme. That 12-13°C gave me 100MHz more ... or maybe I could set a bit higher voltage which was required to stabilize CPU at about the same temps.

These delidding tools are great and it's not because using razor you can scratch PCB or damage something but because SL/KL have really thin PCB and if you put too much pressure ( which is required while cutting through glue ) then you can bend PCB. I actually had that issue with i3 6320 and later CPU was losing contact. With delidding tools it's much easier/faster/safer ... still not always worth to delid your CPU.
OP

dejo said:
pretty sure you dont want to try to delid the 6850. are they not still soldered?
Click to expand...

Read further down in the post. I was joking. Yes, they are soldered.
OP

Woomack said:
using thermal grizzly paste so I assume it would be better with liquid metal but I'm planning to run it on sub 0 temps so I'd rather stick to grizzly or gelid extreme.
Click to expand...

Yeah, you don't want liquid metal running sub zero. I only used it on the die. I like MX4 or MX2 for CPU IHS. MX3 totally sucked. It was super sticky. I used Thermal Grizzly on my GPU dies, memory chips with pads, PCH with pad, and VRM's with pads. Grizzly is a little thicker and a little harder to spread and clean than MX4 and a LOT more expensive; twice the price. Nobody had any Gelid Extreme when I was buying. I always get the biggest tube. It's good for like eight years. When you're constantly taking off coolers, it's good to have a lot.
W

I can't see any special difference between MX4 and anything else on air/water. I just get some other brands with coolers or when there is limited choice in store. Noctua, Cryorig, MX4, Gelid Extreme and recently Alphacool are TIMs that I'm generally using and all are close to each other on air/water. All are also good on cold till about -50°C. At lower temps better if Gelid Extreme or Grizzly Kryonaut. MX4, Noctua, Cryorig and Alphacool are easier to spread so also is lower chance that we get worse temps because of applying TIM. Sometimes it makes bigger difference than used TIM.
S

Meh, I still use a razor blade. It's pretty easy and it is free vs paying $30 for some unnecessary tool. If you're careful with the blade, the risk is low.

Hey DJ how long did it take to receive the tool from Rockit? I might invest in one for my new build. I ain't doing the razor method this time round.

I would happily send my kit to you for shipping costs... just return it when you are done. I don't have the relid kit, just delid.

EarthDog said:
I would happily send my kit to you for shipping costs... just return it when you are done. I don't have the relid kit, just delid.
Click to expand...

It took about three days, but I see you have that covered now.

Daddyjaxx said:
It took about three days, but I see you have that covered now.
Click to expand...

Not too shabby. Yeah Joe is gonna lend me his for the de-lid. Thx tho!
You must log in or register to reply here.

A
Conductonaut and RockitCool Copper IHS --> anyone regularly redo theirs?

Position of the processing cores on a 7700k