The In Win Dragon Slayer
“The Blue Dragon”
A Father and Daughter build by Chas Burkhart​
Welcome to the Dragon Slayer build log. This build was all about family bonding and the passing of knowledge as one would pass the torch. I hope this inspires some of you builders, gamers or enthusiasts to teach and share your tricks and tips to the younger generations. Giving one the confidence and passion to learn should be on all of our minds. We hold the keys and I believe it is up to us to open those doors. 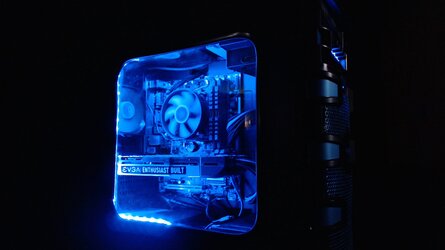 ​
Ever since my daughter was little she had a fascination with PC Gaming. She learned to type at a very early age and would write us short stories on a regular basis with my old laptop she claimed as her own. Once I showed her the WASD layout for PC gaming and how the layout worked she took to the rest very easily.

After several rainy weekends I started to notice she was sprinting, crouching and knifing enemies without looking at the controls and pulling off some impressive key combinations under pressure. When she would find me playing my PC games I was abruptly ejected from my chair so she could play. I would find her playing Minecraft and other indie games on a regular basis from the old laptop.

Needless to say it wasn’t long before she was asking for her own setup so I started bringing her in on builds and repairs … teaching her what each of the components were and the part they played in the performance of the PC. While doing an upgrade for a friend I noticed he had an In Win Dragon Slayer that was beat up and dirty sitting empty in the corner. I had put a tempered glass side window in this case earlier and he upgraded to a Full ATX tower afterword. I walked out of there with an EVGA GTX 570 HD and the Dragon Slayer for $50 … great deal.

When I walked through the door with the used hardware I was greeted with “Who’s that for Dad?” I explained that in order for her to do her own build she would need to earn some money for parts and I would split the profits with her on this build. We would build it and sell it to the highest bidder. I appointed her in charge of the design of the build as well as my helper. Since Christmas was only a couple months away I wanted to keep it a surprise and bring her in on the build at the same so she could make it exactly how she would her “own”. Instead of just doing a build and handing it to her I wanted it to be special, something she would always remember, her first build! 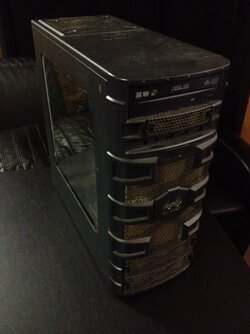 Since the Dragon Slayer case was a cosmetic disaster we had to begin by stripping the tower, cleaning it, priming it and getting it ready for paint. 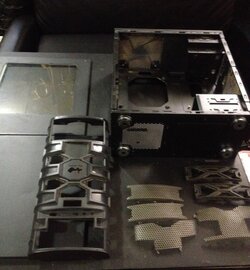 ​
My Daughter decided she wanted the build in Black and Blue since it was a popular color combination as well as her favorites colors. With several days of cleaning sanding, priming and paint the tower came out looking brand new. Black and metallic blue gave the Dragon Slayer a very nice look opposed to the dark gray and light grey. 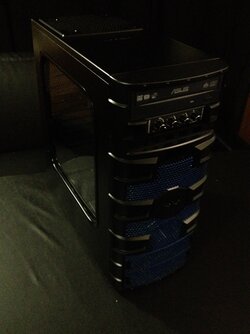 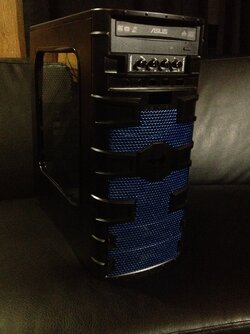 ​
With my daughter’s paint scheme in place next came the high lights of the build. She decided to utilize metallic blue vinyl to accent the front and side of the case. With a pair of scissors, she cut each individual piece of vinyl to fit in its exact location. The effect made the tower stand out even further and looked really clean. She also wanted the GPU to match so she created a skin using a EVGA sticker and the metallic blue vinyl.

​
We picked out a cheap aftermarket cooler, cabling, LED kit, fan controller and power supply. We also purchased a ASUS P8H61-M on sale since we had DDR3 1333MHz memory kit and a Core i5 2400 socket 1155 CPU. I had most of the hardware already since I build computers as my hobby and passion. 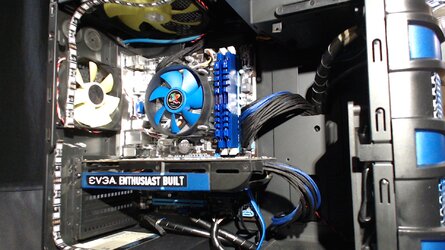 ​
This exact In Win Dragon Slayer was in my shop before and I had installed a tempered glass side window for a friend. I also replaced his fans to LED ones and removed the hard drive cage for extra air flow. This gave us several parts from the original case and a good side window. 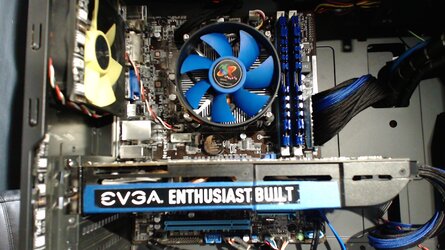 ​
First I had her mount her first CPU followed thermal paste and then mounting the CPU cooler. Then memory and made note of the connector locations. We ran the cabling through the tower making sure to run it as close to the connector layout. We then installed the hard drive, DVD writer, fan controller, I/O shield and power supply into the case. 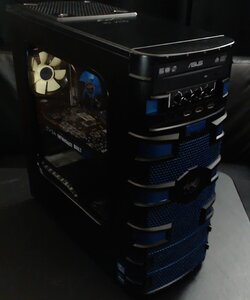 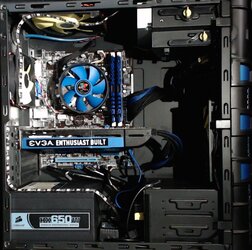 ​
She chose the original In Win fans for their bright yellow blades to add some contrast to her build. Then she ran her RGB LED strips for added effect running the along the back, top and bottom of the windows side of the case. We also removed the stock LED light housing from the In Win logo so the RGB LEDs could be seen from the front as well. 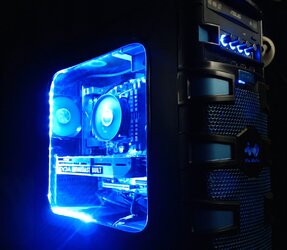 ​
Going over all connections and making sure every cable was properly in place and everything securely connected the moment of truth had arrived. As she looked at me for nerves approval and with the press of the power button the In Win Dragon Slayer roared to life.

After the build had run for several hours stable we adjusted the BIOS settings for boot priority then created a fan setup for the CPU. We adjusted the fan controller to find a happy medium between performance and noise. Then inserted the Windows 7 disk and rebooted.

With several updates and software installs Windows was configured and the build was ready to go. Christmas was only a couple weeks away and my daughter was excited for the prospect of making money off this build to go toward her own gaming PC. This was something she was proud of and had a lot of work invested. We took our photos and boxed it up then wait began.

​
Christmas morning arrived and sure enough the daughter was more than eager to begin. As she looked at each package she picked out the biggest one. Opening it only to find the build we had just done together. You could see the excitement in her eyes as her first build was her own. Then she named the new build The Blue Dragon and started naming off the first games she would install. 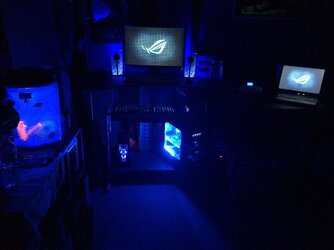 ​
This was one of the most fun builds I had done and was a great learning experience for my daughter. She also has pride for her first build and still and active PC gamer with high expectations for her next build. Please take the time to teach the younger generations, you are never too young or old to learn. Now my daughter has skills and knowledge she will be able to apply in her future and we share a bond that can never be broken.

Great budget build to get her started, I dig it!
OP
C

ATMINSIDE said:
Great budget build to get her started, I dig it!
Click to expand...

Thanks ATMINSIDE, she is already scoping out a Z170 and a GTX1060 for her next build. She wants go water on this next one .. lol

Thank you, the daughter really enjoyed it and I now have all of my nephews jumping the console ship to go PC.


ROG Loyal Fan 2016
You must log in or register to reply here.

Looking for info on setting up wordpress