The open beta starts today for Tom Clancy's The Division.

*edit It is open to all current platforms. PC/XB1/PS4

Very nice graphics, will try it out

Lol.... I was thinking that was not too bad.

These are not really Beta's anymore, IMO, more like sever stress tests.

I hope that this has some of the major bugs fixed since the last closed beta (after watching/reading a lot of reports there was a good amount of hackers/glitches and such). Will give it a shot this weekend if I have time. 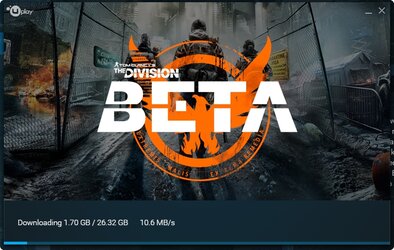 Ok so far loved the graphics, especially night time when its snowing it becomes very silent hill The game world is HUGE. No bugs/glitches to speak of so far. My rig never dropped from 60fps vSync since i started the game (1080p ultra settings) although i have seen a lot of people complaining of low fps in chat so YMMV. Levelled all the way to 8 (supposedly max in beta) and finished all the quests i could find, upgraded both HQ areas 2x (sadly most of it is closed for beta and you still cant craft gear) and then started on red areas... only thing i don't like at all is in the Darkzones (considered pvp) is if you accidentally shoot a player you automatically get branded a target and get a bounty on, which makes everyone try to kill you. You also lose all loot you might be carrying and a small portion of "ranking exp". Be ready to die a lot especially if you love using grenades.

Game is very easy and intuitive until you get to Darkzones, after that you either team up with a friend or run around blindly trying to find targets who will all be lvl8+ (90% will be lvl9+) and very hard to kill. There is your usual assortment on weapons including rifles, shotguns, uzi-like, pistols BUT I miss my trusty sniper rifle which so far haven't found any.

Overall even still in beta status i would recommend it if you play on-line with friends, its very CoD or Battlefield but with a post apocalyptic feel to it (without the zombies... so far...)

I would say it is more borderlands than cod/bf. Every enemy in this game is a bullet sponge. Headshots do a bit more damage, but even having a high end rifle doesn't down guys as quickly as you would expect shooting a guy in a hoodie.

I've been waiting for a game like this for ages. An hour and a half into the beta and I bought the game.

Never been a borderlands fan

you get the CoD experience when you go Darkzones with friends or team-up. True on the bullet sponge but they had to make it difficult somehow ?

Get the FPS idea out of your head Janus, it plays like an MMO more than an FPS.

ATMINSIDE said:
Get the FPS idea out of your head Janus, it plays like an MMO more than an FPS.
Click to expand...

ATMINSIDE said:
I wasn't aware Borderlands is an MMO, is it?
(Not a Borderlands fan)
Click to expand...

Borderlands is a first person shooter rpg that offers up to 4 player coop (it has loot, bullet sponge enemies, many weapons, talent trees, progression, etc. I would compare Borderlands to destiny if you're more familiar with that game.

But I agree, this game is for all intents and purposes a 3rd person shooter mmorpg. I imagine there will be raids etc later on in level progress.

Janus67 said:
Borderlands is a first person shooter rpg that offers up to 4 player coop (it has loot, bullet sponge enemies, many weapons, talent trees, progression, etc. I would compare Borderlands to destiny if you're more familiar with that game.

But I agree, this game is for all intents and purposes a 3rd person shooter mmorpg. I imagine there will be raids etc later on in level progress.
Click to expand...

I would say this is closer to Destiny than anything else I've played, very familiar with it.
Maybe this takes the parts of Borderlands (that are actually good) and puts them into a Destiny-esque play style?

Meh. This game did exactly impress me. I found the Dark Zone to be pretty pointless. Very hard to find a group and stick with them. You'd basically all need to be in a Skype call or something. I am not sure that I would want to coordinate a time with 3/4 other people. Not that I even have enough friends with the gaming computers to do it. Aside from that, I was unimpressed by the voice acting or the animation because it didn't seem real. Cheesy like Call of Duty. (Mostly the main girl who is injured, others were fine.) Other than those things, the game seemed enjoyable. My main concerns are that this game is going to get repetitive quickly, and that since it is RPG style, you might enter an area where the enemies are basically bullet sponges. I don't think I am going to pay $60 for it. Maybe when it drops down to $30 or so and I start hearing more positive than bad things.

Welp, let's give this a whirl. The closed beta had several bugs, enough that made me just stop playing. Hopefully this clears those up.

Maintenance this morning and a temp spike of ~5c on the CPU ? anyone else getting this ?

Is it warmer in your room this morning?
I wouldn't worry about it, your temps are safe still.

Same temps, chilly. ~55c is Prime95 small FFT temps with my current settings, and HWInfo registered 100% usage on all cores during the game when yesterday barely hit 70%. No fps fluctuations. This straight after maintenance/patch is kinda...

Noticing the CPU utilization says MUCH more than the temps.
Any updates/antivirus scans/etc running in the background?
You must log in or register to reply here.