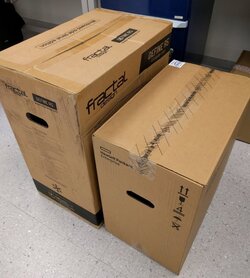 As hinted at in another thread, above starts what will be an update to my current main data store. This will replace a HP Microserver Gen8 which gave me a scare recently when a disk fell out of array, and I decided I really should have double redundancy. It also gives me an excuse to add more capacity.

I like the idea of server hardware (primarily ECC ram) and wanted more of the same, and the HPE ML10 Gen9 seemed to be a good low cost donor. The case it comes in is too limiting, so I was going to relocate it into the Define R5.

I've done some sanity tests on the ML10 Gen9 to make sure I can run it, since servers can have funny behaviours we're not used to with consumer kit. In short, it takes a standard PSU so I can replace it with something nicer and more SATA connectors. The mobo front panel and USB connectors are 2mm pitch, instead of the more common 2.54mm (0.1") pitch so I'll have to make some kind of adapter for that. I've done a proof of concept for the power switch only for now.

The mobo only has 6 SATA ports on it, and I've got a PCIe 2 port card which I checked works to give me the up to 8 drives I will start with. I haven't 100% decided yet, but initially I'll go unraid with 4x3TB storage, 2x3TB parity, and 2xTBD for redundant cache. I'll reuse existing drives.

One quirk of the server mobo is it will refuse to boot unless it has a system fan connected to it. I will need one anyway, but it was a pain when testing after extracting the mobo from case.

The performance of the system is nothing exciting, but it doesn't need to be for my uses. I did find it amusing, running off a 150W PicoPSU it was only pulling 8W measured at the wall when sat idle at Windows desktop.

The mobo only has two DP connectors on it which slowed me down, until I realised an old monitor had a DP connection where my newer cheaper ones don't. However I couldn't find a cable other than the one on my desktop so I had to steal that. The desktop will make do with HDMI and dropping to 50Hz refresh until I get a replacement.

Job for weekend will be to start mounting the mobo into the case and initially steal something bigger than the PicoPSU from an existing system for testing. I think I have enough SATA data cables, but might need SATA power splitters depending on the PSU. Given it is a window case, I might still bling it up internally.

On that note, I could fit my spare 280mm AIO in the case, but that would make overkill sound like an understatement. With the included cooler the CPU never gets about 40C anyway. I also have a spare 120mm AIO but it doesn't make it any less overkill. I might go instead for a tower air cooler of some sort, depending on what I have spare. Most likely a Hyper 212.

PS. It's an old controller, so it's limited to under 2TB drives
OP

I'm using unraid so software all the way. Also I already have a quantity of 3TB disks so 2TB limitation would kill me there.
OP

Started fitting it to the case. Mobo went in no problem. The Define R5, maybe I should have paid more attention before ordering it. It has some nice features but doesn't feel like it belongs in its price class. I moved the rear supplied fan into the front so along with the existing one they're both blowing across the drive bays. I've fitted a Noctua into the rear exhaust position, which will also connect to the mobo header so it wont complain. The front pair will go to the fan controller built into the case. Still using the PicoPSU as proof of concept before I look at PSU options. 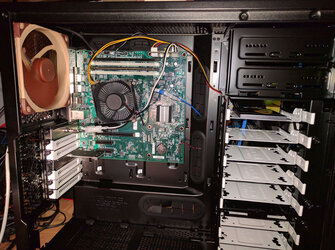 I was getting some good progress. Extracted and moved a PSU from another system. Moved the original 4 drives over, moved the unraid boot install over... I can't get the USB to boot. Just goes to UEFI shell. Yes, I have selected it... need to take a break...

Edit: panic over. It was as simple as turn off UEFI. Booted 1st time in legacy mode, once I dug around in the bios and found how to do that.
Last edited: Nov 19, 2016

mackerel said:
Started fitting it to the case. Mobo went in no problem. The Define R5, maybe I should have paid more attention before ordering it. It has some nice features but doesn't feel like it belongs in its price class.
View attachment 185264
Click to expand...

Just curious what your complaints are about the case?
OP

The side panels are really nice and solid feeling, but when I took them off to fit other bits in the case, the whole case twisted really easily, so structurally it isn't that sturdy. It is still a nice case, and remember the only reason I chose it was for the drive bays which are now filling up fast. For a normal build, in a similar style apart from the drive bays, I also have a Gamemax Silent case which is about half the price which is nicer overall.

mackerel said:
The side panels are really nice and solid feeling, but when I took them off to fit other bits in the case, the whole case twisted really easily, so structurally it isn't that sturdy. It is still a nice case, and remember the only reason I chose it was for the drive bays which are now filling up fast. For a normal build, in a similar style apart from the drive bays, I also have a Gamemax Silent case which is about half the price which is nicer overall.
Click to expand...

Thanks for the input. I've only really heard good things about the R5. They often go on sale here in the states for a good price (like $70). I hadn't seen the gamemax silent before, but it doesn't look like it's available in the US.
OP

If I could have got it for $70 or equivalent after tax, that is kinda the ballpark I'd expect it to be. With the world events recently everything is a bit screwy in the UK.
OP 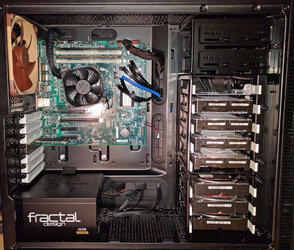 The power supply is a Fractal Edison 450W, which I also own a 550W version of. That came in particularly handy, as it only comes with 6 SATA power connectors in total, but I could take an unused modular cable from the other PSU and I now have 10. When I need more it will be back to molex and SATA adapters.

Finally got the drives in and doing a rebuild now. It appears unraid wont let me simultaneously add a data drive and parity drive at the same time to an existing array, so I'm just doing parity for now.

After hunting around for spare (longer) SATA cables than the mobo came with, I've only got 6 drives connected for now, original 3 data + 1 parity, plus 3 "new" ones, one of which is having parity created. After that, I can add the extra data disk, with the last one unconnected as my current licence only allows 6 drives. When I upgrade the licence, I'll add the last data drive, and will start thinking about adding a pair of cache drives which will be in 2.5" form factor. That still leaves one 3.5" bay free for future expansion. I suppose the 7th drive will essentially be a cold spare until then.

Back a step... I have tested out the SATA expansion card and confirmed it works, so along with the mobo I only have 8 SATA ports. I'll need to either add an extra one, or get a nicer 4 port card. HP really did not put any effort to laying out the SATA connector positions in a nice layout on this mobo...

Because it is a window case, it looks rather dull in there as I have no lighting as yet. I might have to buy a job lot of matching SATA cables later. Also I've only connected the power switch. If I want LEDs, again that'll come later. There is no benefit to me connecting the front USB, and the mobo doesn't come with audio. Well, it is a server!

I might get a 4-pin PSU power extension, not because I need it, but the 8-way it comes with looks really ugly. Wait, this is a file server right?

Edit: keep forgetting to write, I've decided againt changing the CPU cooler as HP made an integrated backplate which holds both the CPU mount mechanism as well as their heatsink. It would be no small job to modify that to allow after-market coolers, although a nicer fan is not out of the question.

Excellent case choice. Pretty sure it's available in mATX though for your mATX board??
OP

I didn't check if they did smaller cases with the same number of drive bays. Once I found this, and it seemed to do the job, I stopped looking. I had spent too much time searching for a case with lots of drive bays by that point so was already tiered of looking.

I need to do some more work on it today. I got a blue LED strip to fit which will also serve as the power light, since I never made an adapter cable to go from the mobo header to the case built in one. I got a pack of matching SATA cables and also sleeved power cable extensions to try and tidy up. Am I insane, worrying about cosmetics on a file server??? I haven't yet gone as far as to consider ditching the Noctua fan... that colour doesn't go with anything!
You must log in or register to reply here.

Upgrading one of my machines - which should I upgrade? (first world problem)