Think I found a new case!

I usually switch my case every two years because I get bored looking at the same thing everyday. I think I may have found the successor to my current case. How do you guys feel about the Thermaltake Tower 500?

Looks pretty nice. I've always been a fan of it's big brother the TT T900.
I'm sure your build is gonna be wicked nice in it.

Hyte Y60 looks nice but check all restrictions before you decide on one. Not every cooler will fit and not every graphics card will be supported if you use some other, larger components like the mentioned cooling.
I think I get one in 2-3 weeks as I had a delayed confirmation and I missed the first batch in the EU. I asked for the black/red version but who knows what will arrive.

For the record, I've got an MSI 360mm AIO (ML360? With that 2" screen that sticks out off the top) along with a 3090Ti Suprim. At least on the video card side, it doesn't get much bigger than that (3.5 slot wide and nearly 6" tall). It's mounted vertically with no clearance issues to the card.

I assumed that signature hardware with an aio would go in there.

I've got am azza opus FS in classiest. Now there you need to really worry about clearances. That didn't fit my gpu but no issues with 360 aio + gpu.

EDIT: Also, I think the 160mm clearance they have doesn't limit much. My massive GPU isn't close to being in the way. I think you'll see once you have one in hand. Looking at it, the height of this GPU is below the first M.2 socket on the Extreme, so there's plenty of room for air coolers even with a massive graphics card. However, if it reaches out over the GPU, you'll get GPU heat mixing up in the air cooler. 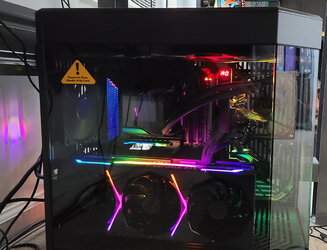 U
Opinions on Xigmatek in general and the Gaming X case in particular?