Or as NVIDIA is calling it...the Titan Xp.

Yeah - the guy who is naming these things must live in Colorado...if you know what I mean.

Just need to go with the ++ format

I can't imagine people buying so soon after Titan X Pascal, and 1080Ti.

Like is Nvidia just trying to grab up as much market as possible before AMD Vega?
OP

In my opinion, Getting a Titan was never about value...it was about having "best of the best."

I think the Titan XPp is all about increased die yields on their new semiconductor fab process. Why not try and sell it?

How does the Titan XPp do compared to GTX 1080ti?
OP

I couldn't resist. I passed on Titan X Pascal, lucked out with a great 1080ti, but unfortunately in the points race, fastest card wins in the early adopters reap the benefits.
OP

Let me know how it folds...I am seriously considering one of these to upgrade a 1080 FTW.

FedEx delivery on Monday...sold 2 founders 1080's to cover half of the cost...gonna try going back to one card

I want to know who in nvidia came up with the name. They must know the community had called Titan X (Pascal) as Titan XP, thus naming the new one Xp is borderline marketing genius or giving a middle finger to everyone. Maybe both.

In writing, there is still the differentiator XP vs Xp, but clarity is now reduced and good luck searching for a specific one.

Expect two Titan models in 2018 just to dump on this idea.
OP

There are all of these conspiracy theories about NVIDIA in relation to this. I think it's as simple as wafer yields from their new process. I think they have continually been optimizing the process, and they can now release a full CUDA core set.

I'll be getting one either this week or next to replace my 1080 in my "Little Folder". This one is costing me painting of the inside of the house and new pool equipment - hehe.

The new pool equipment will be totally installed on Monday. Tots automation! I'll be able to turn on the spa and adjust the temperature from my phone - hehe.

Sorry to play devil's advocate here, but it doesn't really matter what the community calls it, the original naming is Titan X (Maxwell) or Titan X (Pascal), maybe the "p" in the new model might just stand for "pro" or "patsy" as it's basically the same board with more CUDA cores and a higher overclock ?
OP 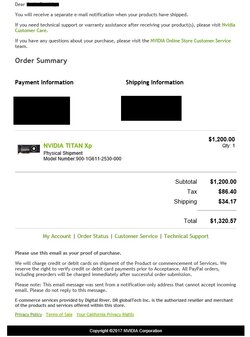 Should be here tomorrow!

I just started playing around with this...running 2,000 MHz right now...65C on air cooler!

How many ppd?
OP

The new card is running the latest drivers (the one I was using for my other cards didn't work).