To buy or not to buy? A monitor buying dilema

I'm debating on whether to buy the Samsung Odyssey G7 32".

I'm currently running a 1080ti and not sure when I'll be able to upgrade my gpu due to the current market availability. Once the scalping of GPU's ends, I'd like to try and pick up a Strix 2080ti. If that fails, I could try and get a Strix 3080ti but that's less likely and may only happen once the 4000 series cards are released.

The most graphically demanding games I play are RDR2. I plan to play Cyberpunk in the near future but these are my favourite types of games. Other than that, I'm still stuck playing Forza 4 Horizon (because I love it) and league of legends as well as other non graphically demanding titles. I don't play FPS precision games.

Would you buy this screen now since it's on sale? Or don't bother until I get the gpu upgrade, which could take months?

Thanks for your input. 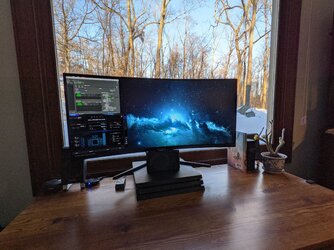 Thanks for the tip. I can't get a 34 as it's too big for my setup. 32 is max Ultrawide just doesn't work for my workstation.

Pepi93 said:
Thanks for the tip. I can't get a 34 as it's too big for my setup. 32 is max Ultrawide just doesn't work for my workstation.
Click to expand...

Just to to be sure the actual width of this is a shade under 32" so the listed size is diagonal. That is why I wish I got the 49" because it's only 46" wide.
You must log in or register to reply here.

Want to buy a drone.