I really have enough of ASUS, issues with their products, and pathetic support. I'm just done with this brand.

Some months ago I sent ASUS Crosshair Impact X570 to RMA for problems with CPU stability. Support said that I scratched the PCB - on the photos from support was a barely visible scratch next to the audio card module, and the trace wasn't even damaged. What's more, it couldn't be done by me as the module was never removed. What audio card module has to do with CPU stability under load - the motherboard was crashing with 5900X but not with 5700G (which is much lower wattage). They made me pay for the repair even though it wasn't my fault.

Today I got info that ASUS Strix Z690I Gaming was rejected because I "damaged CPU socket pins". I took photos before the RMA. This is how it was before shipping to support: 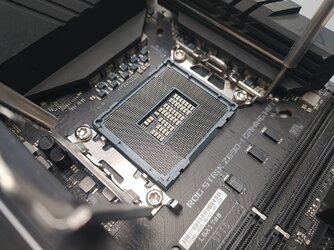 The motherboard is crashing in all stability tests after 1-2h. No matter if I run RAM stability, CPU, FPU, or mixed. So it's not like it doesn't work at all, but isn't stable.

All this after 2x ASUS Maximus XIII APEX Z690 with faulty DDR5 slots.

My previous experience wasn't much better as they accused me of damaging 2 other motherboards for which I also had photos and they finally fixed them for free. I also RMAed a gaming laptop for a damaged display. It was going there and back 3 times as they put a "new" display with 30+ dead pixels and another time they didn't put everything correctly and were bright spots because of too big pressure.

I have no idea how the current case will end but I have enough of ASUS. I'm not even sure where I can report such a thing. I don't really want to push it through local courts.

Too bad this is happening. Sounds like my last couple experiences with Apple and why I don't use their stuff any more so I get it. Hope it works out.
OP
W

I posted the same stuff on ROG forums. I wonder if anyone reacts.

My white strix 3080 has quite loud coil buzz when it has a high load applied to it, when I asked them they said it’s “normal” which I find funny because neither my Zotac 3090 nor my EVGA FTW3 have had any coil noise whatsoever.

Their forums are pretty dead imo, its unlikely you’ll get a meaningful response other than “lol go check customer support”

To be fair eVGA had the same coil whine problem at one point too. I do agree the ASUS tax has become a little excessive lately though. I've been an ASUS loyal for a while now but have been looking at MSI for next build just to try something new.
OP
W

I used to buy ASUS higher series motherboards because there was better support and I could overclock higher than on other motherboards. But it was maybe 4 generations ago. I still can't think of any other motherboard brands that I sent to RMA since the design flaw of Gigabyte Z87/97. Since then I had multiple MSI, Gigabyte, ASRock, Biostar and other brands, including what I bought and what I got for reviews.
Right now MSI overclocks the same if not better, has better support, and lower prices.

Looking at some other sources, ASUS is often rejecting RMA for "user's fault" nowadays. It's not my first motherboard when was no damage or the damage was not my fault, but the product lost warranty and they didn't care to help or offered a paid repair without checking the real problem.

The motherboard arrived today (before I saw support reports) and there is an info that I didn't want to accept the paid repair. I didn't even know they offered that. I would probably accept that if it wasn't much. I wouldn't be happy but it's hard to win in a case like this.

...they probably expect this.

You've got the pictures to back you up. Give 'em hell!

I seldom buy Asus products, but when I do it's always the lower end value stuff. My current $99 Asus H610 mATX motherboard and $499 RTX 3060 Ti mini GPU have been flawless. My last Asus product was an H81 mATX LGA 1150 motherboard which was also fine. I always felt their higher end products were overpriced with terrible support so I've always avoided them. Over the last 10 years or so, most of my motherboards have been either Gigabyte or MSI.
OP
W

Today I ordered EVGA RTX3060 XC as there was a promo on local Amazon. I wanted ASUS Dual which was a bit cheaper, but ... ehm, well ...

ASUS ROG motherboards used to have better and longer support, but not anymore. I have had constant problems with their support for like 4 years. The same with motherboards and laptops.

My first three MB were Asus. Then I went to GB because BIOS update seemed to be easier to do (for me) I went with MSI this time. I never had any problem with any of them. I had two video cards laid down, one was EVGA and the other was GB, not a problem at all. This was ten or twenty years ago though. Too much greed no one wants to warranty anything.

MSI has been notably improving in recent years perhaps to repair their image in the wake of several reviewer-bribing scandals they had. There are posts on reddit of people RMAing lower end 3000 series cards and getting Suprims offered as replacements. I have an MSI mobo and I like it so far, their bios is easy and modern. Probably gonna go with them next go around for GPUs. The only thing I dislike about them is their cheap stripmall chinese restaurant dragon logo.

I was somewhat put off by the experience I had with Asus years ago, over some skt 775 board(P5B) that was popular. It was far more expensive than I usually went with, don't remember the particulars but the RMA outcome was sub-standard. The replacement board looked like it was pulled out of their e-waste bin and tossed into the product box, no cables or usual accessories. Left me without even the I/O plate, as all that was returned with the board. I'm sure my experience was out-of-the-ordinary, nevertheless- no more Asus purchases for me after that.
OP
W

Culbrelai said:
MSI has been notably improving in recent years perhaps to repair their image in the wake of several reviewer-bribing scandals they had.
Click to expand...

Most brands still do that. It works a bit differently - if you won't give a good review then you won't get another sample. Especially smaller websites have these problems, so the web is flooded with fake reviews. Another problem is that most reviewers are clueless about what and how they test. I had some problems because I didn't want to remove bad comments about some products, but I didn't lose any contact and some of my contacts actually respect me for that (and I work with them for 5-9 years). However, I know that some guys were forced to change their reviews, or couldn't get another sample for some long months.

Had heard horror stories about Asus RMA before. Not that I'm planning on building another system any time soon, but they're still my first choice for a low cost OC tier board. I don't trust Gigabyte to make/update a decent bios, and Asrock has given me power related stability on both Intel and AMD at stock. Problems which weren't understood until long after. MSI didn't impress me at all in Skylake days so I've avoided them since.
OP
W

MSI has changed a lot in the last 3 generations. I wasn't convinced until about 300 series motherboards. Since then, most of my RAM OC records were made on MSI ITX boards.

btw. the store sent me photos from ASUS support and it looks even worse for them. The marked spots look more like shades of the CPU frame "key" (light is reflecting this way). Some others analyzed my other photos and all thought that probably something is in the middle ... not on the sides. 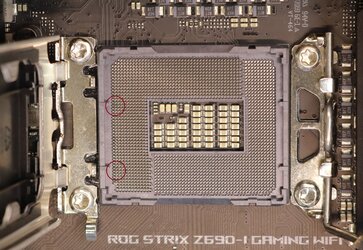 I'm not going to rehash all my posts hating on manufacturers RMA support. IIRC it was ED who called me out about how my list will forever grow and I will have noone to buy from.

I believe this issue is ever evolving. Heck it might even just be who starts your claim in the RMA Department.


The bent pin is a good reason to go with AMD. If you bend a CPU pin at least there is a chance to straighten it. Bent MB pins seem near impossible to bend back correctly.

Good luck getting everything sorted Woomack.

stompah said:
The bent pin is a good reason to go with AMD.
Click to expand...

EarthDog said:
Ohhh, won't you be sad next gen...
Click to expand...

this seems about right for them. I stopped buying from them when they refused any warranty work on a P2 board

stompah said:
I'm not going to rehash all my posts hating on manufacturers RMA support. IIRC it was ED who called me out about how my list will forever grow and I will have noone to buy from.

I believe this issue is ever evolving. Heck it might even just be who starts your claim in the RMA Department.


The bent pin is a good reason to go with AMD. If you bend a CPU pin at least there is a chance to straighten it. Bent MB pins seem near impossible to bend back correctly.

Good luck getting everything sorted Woomack.
Click to expand...

As I mentioned earlier, there was a similar problem with my AMD mobo where I couldn't cause the damage, so they can always find a way

Sadly, as ED mentioned, new AMD are expected to have LGA sockets. The same as server CPUs have already. I don't get why they move to LGA. The main reason that Intel gave, was to deliver more power but AMD CPUs were even higher wattage/more cores and somehow they could run in a standard pin design. I guess that Intel wanted to reduce RMA costs and transfered all expected issues onto motherboard manufacturers.

There are other users with weird RMA rejections like the one in my thread on ROG forums. It was moved so here is the link if anyone wishes to check. ASUS said that will check my case, so I'm waiting now.
You must log in or register to reply here.