Overclockers is supported by our readers. When you click a link to make a purchase, we may earn a commission. Learn More.
1

I'm starting to think something is wrong with my 8800gts 320mb since I have used 2 diff motherboards and gotten different graphical glitches on both.
I used to get slight moving shadows in the middle of the screen during some games, I switched to a newer motherboard and it was fixed, than I had them during Tomb Raider ANV. After cleaning my GPU inside the shadows problem fixed themselves. Now I tried Chronicles of Riddick: Assault on Dark Athena and I get transparent checker board patterns on the middle of the screen across the screen.
RUNNING:
Motherboard: MSI-NF750-G55 nForce 740a SLI 2x PCIe 16x 2.0 (Running 2000Mhz FSB says it can do 2600 but my powersupply is at it's limits I believe)
CPU: AMD Phenom II x4 955 BE 3.2 GHz
RAM: 2x 2048MB of DDR3 1600 running in 1T 800MHz mode (FSB DRAM 1:4 Timings: 9-9-9-24-40)
GPU: GeForce EVGA 8800gts 320MB latest drivers (The Motherboard has an onboard 8400 I disabled it but shared VRAM is still enabled can this cause problems?)
Power Supply: Eagle 500-530 W
OS: Windows Vista 64 Bit Ultimate

Could you use GPU-Z or rivatuner to monitor your temps while the GPU is under load? Use furmark to stress the GPU and post back with your temps.
OP
1

Ok Downloading 3D Mark Vantage and running GPU Z, but I don't think it is the GPU I have the fan settings 100% and just cleaned it from dust.

"50.0C Has 2 for some reason the top one is the top one bottom is bottom." Not sure what your mean by this but i'm guessing ambiant temp?

Please could you download Furmark and stress with that. It should heat up the GPU even more than Vantage.

Also, is the GPU overclocked?

Could you also check that your PCI-E freq in the BIOS is set to 100mhz.
OP
1

PCIe set to 100, it is not overclocked and not sure what ambient means I guess idle? I will try to get Furmark hold on. Running a log.

Ambient temps are most likely the PCB temp of the card.
OP
1

One test ran 89C but I was not sure which one you wanted me to do so I tried a few including the super burn test before, I thought the temp was not changing until I realized it was so I tried this quick one minute one and got that high, but prob already was that high so yeah lol

sorry about that, but you picked the right test going for the super burn test. That temp seems high for just a 1min test. Video cards (aswell as CPU's) cool down super quick so even if you did stress the GPU just 5mins before that temp seems high. Can you run it for a bit longer? Just don't let it get over 100c.

I had two 8800GT's in sli and even on a hot summers day they got to about 90c when using furmark. This was after atleast 15mins of running furmark and the cards were heavily overclocked.
OP
1

Doesn't sound to good for a 8800GTS at stock speed. I would remove the heatsink and apply some Artic silver 5 to the GPU. Just don't remove the thermal pads that make contact with the video cards RAM.

Also what is your case cooling like? Any chance of some pics?
OP
1

Yeah 97, also I noticed GPU Z said no loading on video engine, gpu or memory controllers during the test but it did show the GPU getting hotter.
no pics but I have one main FAN in the back and one in the front, one for the CPU and the GPU one.

Not sure about that but I would definatly be removing the heatsink and applying AC5, also remove any dust while your at it.
OP
1

I had removed dust earlier today and the default Artic did look broken up.

This is your card with no heatsink. Apply AC5 (or similar) to where I have put the red lines. 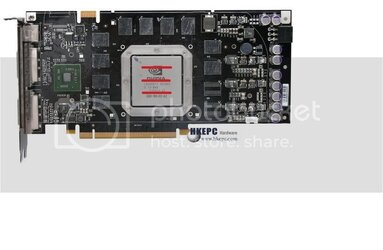 I was wondering if this was too slow

I'm only running the trial edition and when it tried to do the Alan wake test it seemed to show nothing and almost skip it, also it did not record the individual results just the average.
http://service.futuremark.com/home....C72A06A648FD5CF?resultId=263276&resultType=18

Ok I applied some paste where you told me to, Running IDLE 52 so obviously it did something.
And 62 under load but the checker pattern is still there so that means it's something else?

Would it be possible to try another card in your system? It may be that with your card running so hot for long periods of time that it has suffered some damage
OP
1

I can enable the built in card and check sure.
OP
1

Ok On board same problem, it can be one of 3 things, the game, the screen, or the screens vga connection is messed up

E
I feel like my build isn't performing at an optimal level - Advice appreciated!
2

Strange issue with my pc.
2