Overclockers is supported by our readers. When you click a link to make a purchase, we may earn a commission. Learn More.
X

I have an issue with one of my PCs. It freezes when I run videos or have a lot of browser tabs open; it's safe to say the heating or the power is poor, but my heatsink is much better than the stock cooler. I use one case fan as the CPU fan (a 3 pin fan that plugs into "CPU Fan 2" on the motherboard). I recently added new thermal paste, but the case is cramped and accidentally placed the heatsink the wrong way and had to reattach it without respreading the paste or checking it to verify it is complete and not missing anything. It took so long that I feel like I should start over with the thermal paste. But this motherboard has another problem. I was installing RAM one time when I accidentally cracked the nickel battery slot, and now it's loose. All I heard was a loud snap after blind pressure was applied when it happened. I don't see anything disconnected underneath, but it wiggles about 30 degrees left and right, without falling off or losing the battery which keeps the lock. I haven't had any issue with the bios resetting the time, etc. Also, the PSU is rated at only 200watts, but it has never not powered on or turned off during usage (it may not have overvoltage/autoshutdown protection like some of my fancier ones). It is the the PSU that came with the InWin, which some say is not half bad. One problem I have is the cables are a pain to clean, but they now look better than in the picture (they are separated and tucked under the 5.25 bay). The Llano APU has a TDP of 100watts. My watt meter has never gone above 145 watts. The board, RAM, fans, and HDD are the only things that use power since there is no PCI-e card with the capable Radeon HD 6650 APU. Any thoughts? I figure I'll start with the heatsink, then consider any repairs I can do with the nickel battery, and then replace the PSU along with adding another fan for ventilation.

I am looking into buying a Seasonic 300W TFX PSU since it is a standard form factor and can replace the one in this case. Is it worth it? Or is it likely due to the thermal paste which was applied but adjusted after the heatsink had to be rotated about 15 minutes later?

What're the temps on the system per HWMonitor?
OP
X

i'll have to check in the UEFi. only have linux on this system but i remember there being some software that has a temp monitor. not sure if it's called sysinfo. The heatsink itself is cool to the touch afer i unplug the system after it freezes. I was using the thermal paste that came with the Prolimatech heatsink. Though i have some Arctic silver 5 lying around. 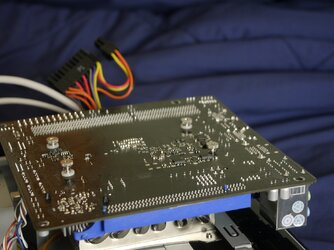 a minor thing- those little plastic washers are nearly impossible to find, i was surprised i was able to locate 3 of 4 of them after noticing them missing.
OP
X

I've found a problem. The H/W monitor in UEFI showed climbing CPU temps >65 degrees Celsius. The MB temp was also increasing to 45 degrees. I just added new thermal paste so I don't know if I added it wrong or if there is something else. The CPU fan is at 1750rpm. it's a light enermax case fan, if that makes any difference. My other PC uses a cpu fan with much more manageable temps, certainly not something that needs a constant 100% fan. Might as well try the stock cooler again and measure those temps. It's a lot easier to install...

That's definitely your problem.
Are there any case fans at all?
OP
X

ATMINSIDE said:
That's definitely your problem.
Are there any case fans at all?
Click to expand...

there is one now again. I moved the enermax to a side exhaust opening. I added a 120mm fan over the CPU as #2 CPU fan and jerry-rigged a 2nd one vertically as the #1 CPU fan. It's far from ideal, but the temps have stabilized to 50 degrees Celsius and 45 degrees for the motherboard. It has all fans full-on, the target is actually 45 degrees so it's not optimal and can't be lowered with the current setup. Surely there are some improvements that can be made. The problem now, after some fan placements, is that it won't post/display any video on the monitor, which happens when something is loose- I checked the RAM and HDD, but i think it might be some of those power switch lights Tried resetting the cmos.
OP
X 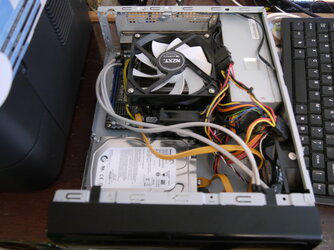 Here's what it looks like now. It posts. Still a little fan issue not having a better place to be, but for now it's working

I removed the optical bay and the 3.5 hdd holder. It's so cramped I can do without, but I might use a smaller 2.5" SSD because of it. I can't expect metal touching the case floor is good for the HDD. plus i have a little tray for my SSD.


Edit: I installed an SSD. the PC hasn't frozen yet after being on for a couple hours. Seems to be working well.
Last edited: Feb 24, 2015

Rather juicy 100W CPU for a PSU that is only rated 200W and your CPU is not the only component using the 12V rail. I have a Thermaltek Element Q with a 200W PSU but my Jaguar CPU is only 25W TDP so there is plenty of free power for other stuff. Although it may still work properly and it could be a temperature issue. Certainly your rather hot CPU (way hotter than Jaguar) is not made for "passive cooling" in mind, it will need a sufficient cooling.

HDD touching case floor is not truly a issue because the case is grounded, but some HDDs got open PCB components that should be covered and not in contact with any metal object. Using SSD at least for OS and some 2.5 inch HDD is always great because much lesser power used (just a few W), so the CPU got even more room for consumption.
Last edited: Feb 25, 2015
You must log in or register to reply here.

Do Fans Plugged in the Molex, Sleep Too When Windows Sleep?