Hey guys, it's probably been about 10 years since I last built a system for gaming. Due to the house quarantine and some more free time on my hands I've decided to dual boot by server that I built last year so I can game once again.

I've got an AMD 1950x Threadripper running 128GB of RAM on an ASUS ROG STRIX board with Samsung M.2 drives. The problem is I have a cheap video card and older 60hz LCD monitor which is fine for my server needs but not for gaming.

It's been a LONG time since I really looked at Video Cards in great detail and well, I'm a bit overwhelmed.

I was leaning towards NVIDIA but then came across some articles stating that the NVIDIA cards don't do as well as the RADEON cards in systems running AMD processors with a lot of Cores and Threads.

Anyways, I would like to be budget conscience but also would like this video card to last me a few years.

Obviously either way I need to pair it with a new monitor capable of doing better than 60hz to get full performance but I'm having a hard time deciding on the Video Card.

I was leaning towards NVIDIA but then came across some articles stating that the NVIDIA cards don't do as well as the RADEON cards in systems running AMD processors with a lot of Cores and Threads.
Click to expand...

Between those two, I would go with a RTX 2070. It has RTX so in case you play games with it, you can use it if you choose. Less power use, and right now, nvidia drivers are a bit more stable for some it seems.

It really depends on what you're going for, for gaming the benchmarks go both ways (especially from around 2-3 months ago the drivers from AMD seem a lot better optimized but buggy as hell for some), but the 5700xt is $100-$150 cheaper depending on the model (I think the Sapphire Nitro+ is the best all-around atm). From the reviews I read so far it boils down to “if you don't care about money go nvidia, if you're on a budget of sorts or don't care about RTX, go AMD”.

Just want to note when I said RTX 2070 above, that is NON SUPER. The Super is, generally faster, but that depends on if the price difference is worth it to you. An RTX 2070 costs about the same and performs about the same as the 5700 XT using less power and less driver issues currently. Both are viable options, but I lean towards Nvidia on this one due to RT/DLSS capabilities for the same money.

I thought the non-super variants were removed/replaced from active sales (not counting used/refurbished ofc) ?

Kenrou said:
I thought the non-super variants were removed/replaced from active sales (not counting used/refurbished ofc) ?
Click to expand...

Not here in the states. A quick trip to Newegg yields them available...

There are few on Amazon too...
OP

Thanks Everyone. Back in the day I was really into Benchmarks but today I'm really looking for something to get me a really good gaming experience and don't plan to upgrade for 2-3 years... which is different than back in the day when it felt I was buying a video card every 6 months lol

It's been a couple of years since I looked at gaming on a hypervisor platform. I was originally going to dual boot my ESX server (still may end up going that route) but it looks like VMWare and GPU manufacturers have made some big improvements the last few years. I'm going to test with a Windows 10 VM client on ESX hypervisor using passthrough GPU and I'll report back how well it worked vs running on bare metal hardware
OP 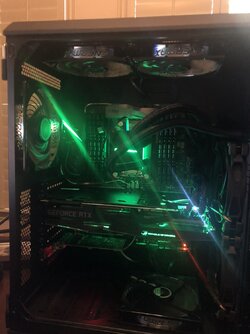 Sexy...
You must log in or register to reply here.

L
Need help on mobo amd I am confused.