We are still chasing down 4 teams to include Nvidia. We are still being chased by Element AI. They have one user earning about 75k ppd or a CPUs worth of points. The other active team member is earning more than us as a whole. Good on them! Our graph is sharply going up which is very good. We've got 39 active folders too so lets keep that trend going up and up.

If you were folding, lets get back tuit. If you haven't folded, get tuit. Fold and fold on.

Let's go guys. Evenings are getting cool with days still being warm. If you held off on routine maintenance for the folding season, this is the time. Get tuit.

You earn it, we like it. (Is that a thing?) Let's do it boys (and/or girls). Now is the time for all lazy foxes to do the work of a dozen clams. (It's been a while since I took a typing class but I think that's a thing.)

Long holiday weekend in the USA. A drinking holiday. DO NOT drink and drive. DO NOT!!!!! Be safe. Be responsible. Death don't care who you are or what you did. Let's cheat death another day by being thoughtful around others. Drive sober and watch out. Don't drink and boat either. While I don't like boats many do and many water craft operators die on the beaches near and around my home. Don't be THAT guy.

Truly appreciate you guys. Everything that you bring to the team and to the discovery of health science. Let's help beat cancer and other stuff and lets talk trash while doing it. It can be enough that we are doing good things but lets try to have some fun doing it too.

No no no, you left out "around" so it's Around Tuit

As in I'll do it when I get Around Tuit, well here is your round tuit, you no longer have an excuse to put off doing anything 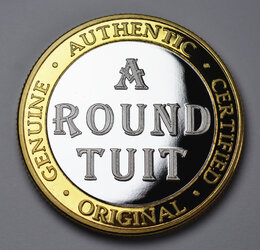