Seems like this question always comes up. How do I share my F[email protected] directory so I can monitor the client with HFM.NET? While the later versions of Ubuntu seem to have "easier" ways to enable this functionality (more point-and-click), I've always used the trusty Terminal approach in conjunction with a custom built Samba Configuration file.

This guide should be applicable to all versions of Ubuntu. However, I wrote and tested it on v9.04 since that is the most popular Folding distro at this time.​
~ sudo apt-get update


Code:
Packages are now installed. But we aren't configured yet. Let's go ahead and stop the Samba deamon.


Code:
Let's make a back-up of the smb.conf file that was laid down with the package installation. There are many good comments in this file that can teach you what each configuration options does.

Copy the text below from your browser and paste it into gedit.

Change the <workgroup> and <hostname> entries to those applicable for your network. <workgroup> should be self-explanatory, make it the same as your other machines. For this guide I chose the <hostname> ubuntu-904-vm.

Change the hosts allow entry if your subnet is not on 192.168.0. You can also comment this option (by placing a # character in the first space) if you are not concerned with restricting access based on IP address.

Once the edits are done, save the file to your home folder as smb.conf.


Code:
Copy the saved file to the Samba configuration directory.

The <username> is the user name you wish to use to access the Samba shares from another computer. So if you're logged into your Windows machine as user1, type user1 in place of <username>.

You'll then be prompted to enter a password. To make things seamless between Windows and Samba, enter the same password you use for your Windows user1 account. 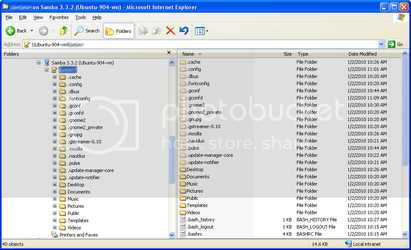 Nice Guide harlem,,, hope you are going to Add/Link to this in the Team32 Folding Guide Stickies!!

Surely and Thank You.

However, once this gets fully ironed out I think deadly might want to post it on the Front Page. If that's the case, then I'd rather use that link instead.

Senior whose title will pier

Nice, I always end up googling it. This will be most helpful.

I've got the Wordpress info now... so it'll get done soon.

10-4 bro... just a quick bump. I don't want to lose this thread and I have no other links to it yet. Been real busy this week, have had no OCF or HFM time.

Just FYI, when you login to wordpress, and click "add new post" you get presented with some template/guidelines for formatting and stuff. This is the part of that about text:

Please stick to the default font, color, and size for all text in your article. Italic and Bold maybe used where appropriate. We encourage the use of links, especially to threads in the Forums. If you should mention a Member, please link to their profile page.
Click to expand...

We've made exclusions for that, but typically we try to avoid the use of color whenever possible - emphasis is often best achieve thru the use of italics or bold. In some cases, <blockquote> is often useful to set part of the material apart, without using gawdy or distracting colors.

This guide is now linked from the Intro and the FAQ.
You must log in or register to reply here.

Looking for a hdd "share" guide for Mint 17.1 that isn't deprecated