Well let me start by saying that I do not expect every one to like the case I am building. I am a amateur sculptor, so much of the things I build has my unique artistic flair to it. So if you don't like it, I don't mind if you say so (and why would be nice) but PLEASE don't be rude about it.

This project has been gradually forming in my head for nearly 5 years. The catalyst that started the whole thing was finding an old dual blower fan in a scrap pile in a barn that was to be razed.

All though the idea of using the blower to cool a computer was there for years the idea did not become a reality until late 2008 with my first attempt to use the blower. (see this thread for details of that attempt). I used that setup for for a few months and it worked well. But for multiple reasons, I did not keep that setup. None the less it started the thinking process that has led up to this current build.


My goals "ARE" (since it is still in construction as of 12-2-09):
Fully functional case.
Low noise.
Fully filtered air flow.
Exceptional Cooling.
Low cost (the Demand of the wife

)...SO...
Use parts I have or can scavenge.
And a fun project to help clear my mind during a stressful life transition.
(will explain on request via private message) 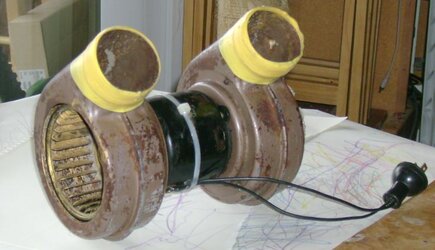 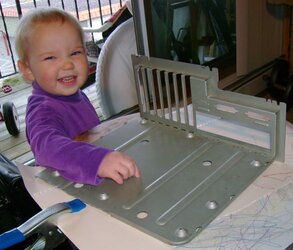 Could not resist taking this picture...that is my daughter... and the foundation for the motherboard 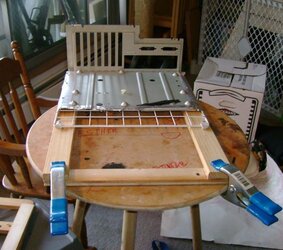 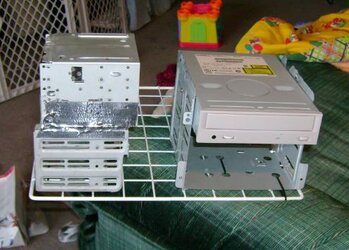 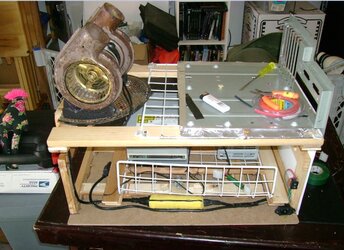 Frame completed. Since the PSU will be completely inside the case, I wired the case independent with it's own plug and master on off switch. Since the Blower is AC, it needs a relay to turn it on and off (see first blower thread ↑), that is the yellow part.
Last edited by a moderator: Apr 7, 2011
OP 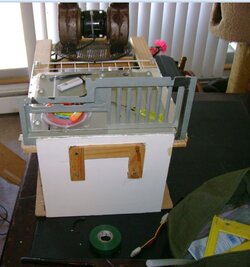 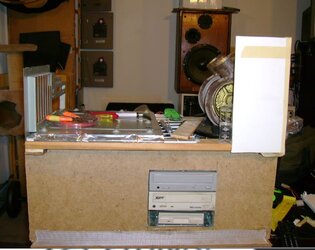 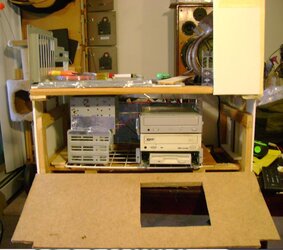 The rack holding the drives can slide in and out. The PSU will sit on the right of the drive rack. I used an old seat belt as a henge for the door. 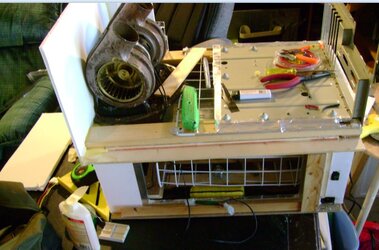 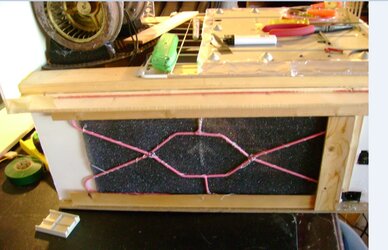 the back has a large removable filter that easily slides in place.
Z

my ears hurt from looking at that
OP

Zerius said:
my ears hurt from looking at that
Click to expand...

I assume your comment is based on thinking that the blower is very loud (?)

But in reality it is rather quiet... It is actually quieter than the 120mm fan I have on my CPU heat Sink now.

hey mate, looks like a great idea! hope you have fun with it and good luck.

Looks like a fun build. Your daughter is very cute. Made my wife give an "awwwww".
OP

hokiealumnus said:
Looks like a fun build. Your daughter is very cute. Made my wife give an "awwwww".
Click to expand...

I've heard of overclocking CPUs and GPUs ... but turbocharging a case ... heck looks like a twin turbo actually.

Getto Ben is going to get a run for his money!

This is SCREAMING for a ricer theme.
Would look MINT with bonnet vent from a Pulsar and a scooby rear wing , Paint it white with a green stripe and have half the blower sticking out with a massive cone filter and a 3" exhaust!!!

hokiealumnus said:
Looks like a fun build. Your daughter is very cute. Made my wife give an "awwwww".
Click to expand...

2nd this... well My wife gave more of a "awww she's cute, so not all these guys are young kids with their parents money?"

looks nice keep up the work... so sculpting... you looked into making a fibre glass top or something to get a nice smooth top on it ?
OP

Thanks for all the comments so far.

2nd this... well My wife gave more of a "awww she's cute, so not all these guys are young kids with their parents money?"
Click to expand...

No I am very much not a young kid living with his parents. I am 31, and happily married. ---Heck, in a few years it may be that my parents will need to live with me.

To answer one question... As for the top? The end goal will be to get a piece of Plexiglas for it on a hinge.


ANY-FOR-WHO; I am very happy with how it is turning out. Larger than my original thought

and it is going to be rather heavy.

Well, here are 3 more pictures that show the progress. 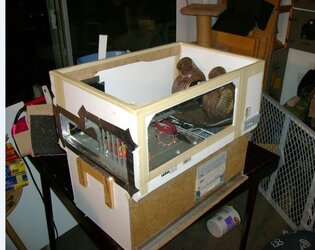 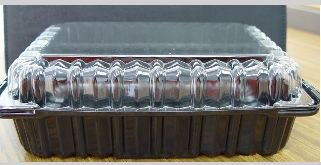 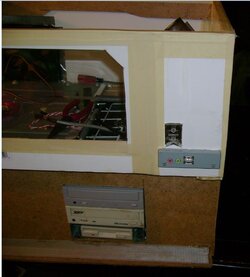 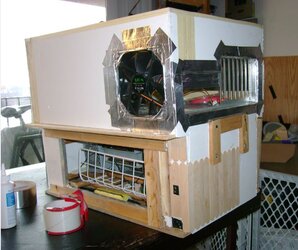 Here is a taste of how I am going to finish the box.

I am just starting to wonder if the single 140mm fan as an exhaust will be enough or should I add a second exhaust fan??
Last edited: Dec 5, 2009
OP 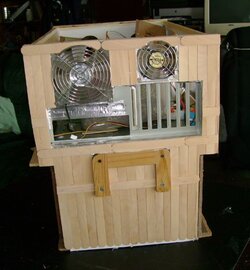 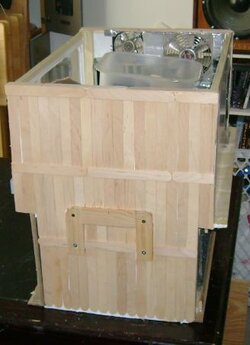 All that is left is panting and a few minor things (like door latches); then I will be ready to install the components. 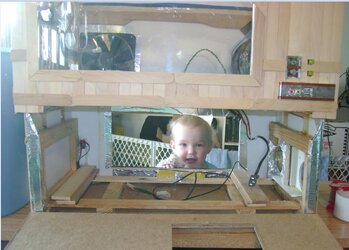 Here is me and Esther playing peek-a-boo. And also a view of the bottom inside with out the hard drive/disk drive rack. 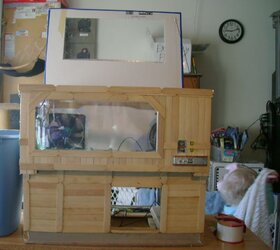 Here is the front with the top lid open. 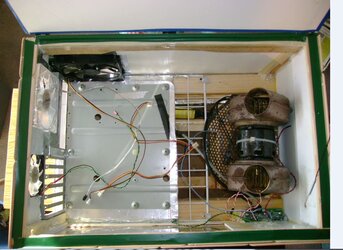 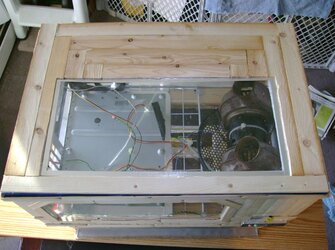 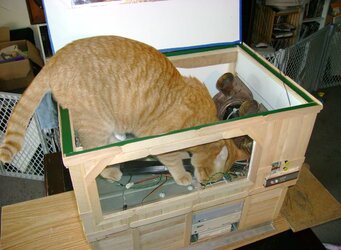 Scout just had to inspect to make sure I was doing a proper job.
Last edited: Dec 8, 2009
OP 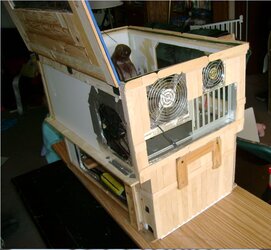 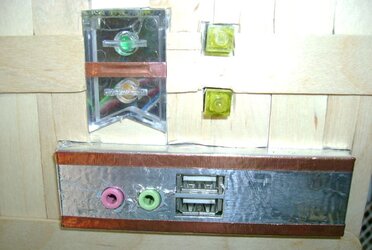 Close up of the "front panel" the 2 yellow squares are the power and reset switches. These gave me so much trouble

The color idea is: RED with bronze accents. But that is not yet set in stone so please feel free to offer other color ideas.
OP

I decided to wait on painting the outside....mostly because my wife wanted the mess cleaned up for now. So I went ahead and installed everything. 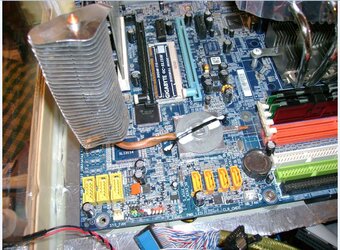 I decided to replace the North-bridge heat-sink with this. It is a modified heat-sink from an old I-MAC. It works well. The white stuff is wet Tacky Glue (it dries clear) - it is there as a precaution to make sure it doesn't move if bumped. And yes I used a zip tie to hold it down. 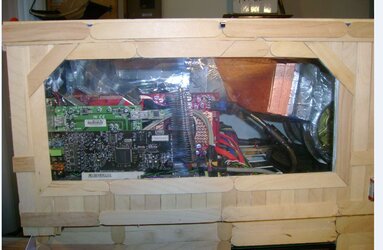 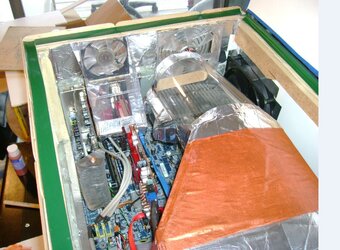 The ducting from the Blower to CPU was not easy to make. Tried 3 other ideas before I settled on this one. 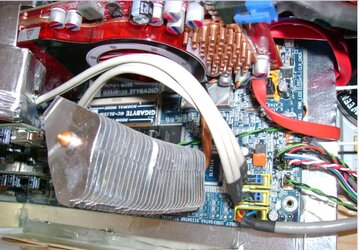 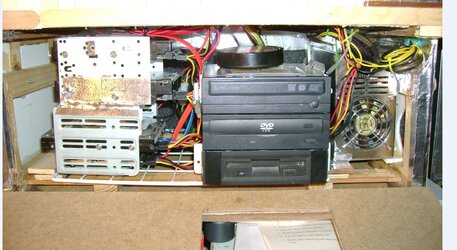 COMMENTS PLEASE! This thread has had many looks but few comments...
OP

I am sad. No one has an opinion on my newly built case. I was really hoping for some feedback.

I think it's great. You did a splendid job working on a tight budget, which I very much respect (and sympathize with). It's original and looks like it should work great. How does it cool?

The popsicle sticks aren't really doing it for me, neither is the tape, paper or lego pieces. If it works for you then that's great but a setup like that would drive me crazy.
You must log in or register to reply here.

U
Opinions on Xigmatek in general and the Gaming X case in particular?

Help me figure out a storage solution