Unneeded bracket hanging on heatsink - to remove or not? 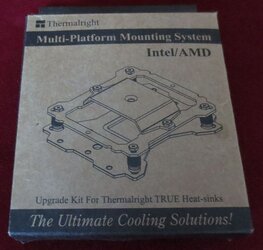 I did not remove this cross-bracket which is useless on Skylake. What are the cons of leaving it hanging there, realistically speaking? 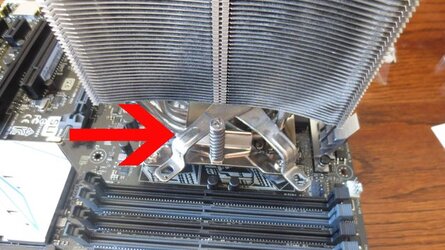 I decided to use the original tall screws instead of the small ones that came with the system. 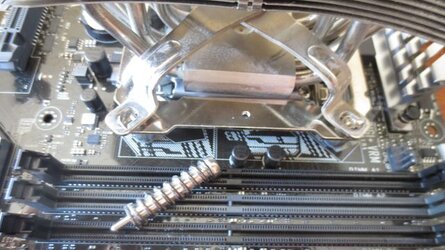 This resulted in the fan not fitting in perfect center. What are the cons of leaving it just a bit off, realistically speaking 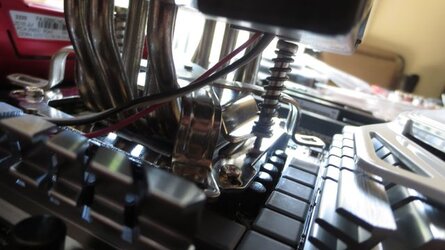 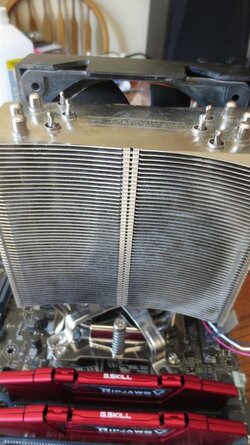 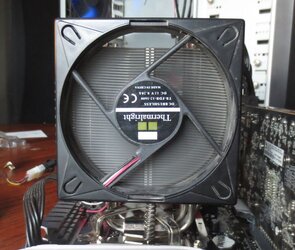 Why are we pulling through the HS and not pushing?
OP

The fan direction can be changed... what about the rest of it?

Without the cross bracket it would make using the shorter screws easier (more accessible) and thus the fan could be properly seated.
Does it make a huge difference? Nope
Just looks cleaner...more balanced.

Now...back to Scotty's question. Why pulling?
I know this can be changed, but must be some reason you did indeed do it this way...inquiring minds want to know.
OP

That cross bracket is from my old motherboard - it does NOTHING but hang there on the new board. It is a hassle to remove, so the question is should I leave it to hang, it has no purpose. It does make contact with the heatsink though.

I can use the retail screws and the fan would fit better, I guess I will do that.

I was unsuccessful in finding out why the fan is pulling.
I would not have put that in like that if someone here didn't tell me to in 2008 when I bought that retail heatsink+fan combo.
I do not know why they said that but I take it the consensus is push.

Maybe it is because the air was being pulled in front of the case, then through the heatsink and out the back.
And the fan was positioned on the side where the air was coming in like this, look if air is →
then
FRONT → HEATSINK FAN BACK →

So if FAN is there it was PULLING incoming air


Does that make sense?

If it just "hangs" and any possibility of it inadvertently contacting anything...possible short? I'd personally pull it.
As to the fan....I also have my fans in a pull aspect. My reason for doing so is mine is a dual tower cooler and by mounting the fans in a pull-pull configuration it leaves the ram slots much more open and accessible.
OP

Well this configuration was pulling
FRONT → HEATSINK FAN BACK →

Pushing the air from the RAM side is usually the "norm".

Either way I would be concerned with the large gap.

Most of your airflow will be running for that large gap of least resistance.

Posts above are correct. Push and fix the gap.
S

Hi Guys, I read around that some heatsinks could cause damage to Skylake cpu, you tell me your experience?
I own an ultra 120 extreme with universal mounting

guy's hes running a skylake cpu, i think he could probably cool it passively with that cooler i dont think fan direction or the gap really matter much any airflow will be sufficient.

wagex said:
guy's hes running a skylake cpu, i think he could probably cool it passively with that cooler i dont think fan direction or the gap really matter much any airflow will be sufficient.
Click to expand...

Air Cooling vs Water Cooling, Things You May Need to Know.
2

V
Showing off my first WC build ever