Wow so I was doing some thinking and decided it would be so nice to see if unreal 2004 would play on my R3 1300X win10 64 bit setup.
I pu the CD in the Bleuray DVD/CDRW and just sat there.
waiting and waiting... what gives? No auto run? Okay, Here is goes click install.

It comes up with the install window just fine every thing okay installing As I am waiting I remember back when my AMD 4400+ was the system I first ran this game on ( I think) then I installed it on another windows system after that till one day it just stopped working, It wasn't the hardware surely, It was the OS , Windows vista hated EVERYTHING! then I could not play it in fact after windows Vista SP1 I was no longer able to play it ( even after the updates).
Finally it is done all loaded up and wow just look it is fast!!! OMG no patches needed this game works!!!
So I have been playing it now and LOVE IT once again. Though there are no servers for online action it still plays great!
OMG the FPS are off the chain!
300+!!! ultra high settings too.

This really makes me happy funny this game is still kickin!
And on today's hardware AMAZING!
I only wished I could get a HUD display of the CPU RAM DISK and GPU usage (like the geeks do) I just don't have that kind of software. If I did I would post up some shots. LOL..

Any one still play Unreal Tournament 2004?

Funny it took a setup like this to hit 300+ FPS back in the day this was launched I was pissing myself if I got 40 FPS! LOL.

Two years ago I did this with Diablo II and fell in love with it all over again. Certain game titles are just fun to play regardless of age. Wagex and I were just talking about Quake Arena yesterday LOL.

MSI afterburner should show that on screen. You can set many options and have them show up through OSD. 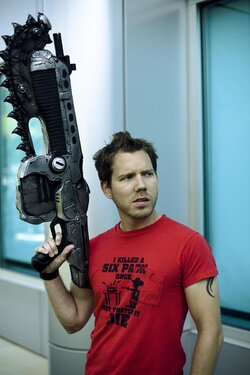 Unreal Tournament … what a classic. I remember when my brother and I used to play, back when I had 5 computers set up in the house. Invite a couple friends over and just have epic LAN battles that would last most of the night. Ahh those were the good ol' days.

Someone built an over-sized version of our office where I used to work and we would all DOOM at lunch.

Used to play with UMX (a UT99 clan) and had a couple of my own maps on one of their servers IIRC. Favorite CTF map was "Uberball". Just FYI, both UT99 and UT2004 have rather large security holes allowing takeover of your system. Keep it firewalled and make sure you completely trust any server you connect to.

Its one of the classics, taco. I would group together Quake II, Doom II, Half-Life and Half-Life 2 as my all time favorites.

Any Killbilly Barn fans? Every time I reinstall UT2k4, have to add that on.
You must log in or register to reply here.