I'd completely forgot we had a laptop section tucked way down here in the basement of the forums.

I inherited my Dad's old laptop which is way better then my even older and slower laptop. I decided to keep my Dad's laptop and give my old one to my sister. So, I'm conducting some upgrades to hopefully make a 6 year old laptop only seem 2 years old... lol. As I go through what I've done and what I have ordered, I'm hoping you guys can give me some ideas how else I can spruce it up. Update RAM and swap over a SSD, that much I do know and I'm doing.

It's a Toshiba Satellite P755 with an i7 2670QM CPU and integrated Intel HD Graphics 3000. The specs say 6GB of DDR3 and 640GB HDD. I ran a couple benchmarks (SuperPi 1M and 32M). The laptop was sluggish and limping along. I checked temps and they would climb up to 90 degrees during benchmarking. So, it looked like cooling could be improved. I had never taken a laptop apart before, but I've built plenty of desktops, can't be too much different, right? I found out, yes, they are a lot different.

I managed to get the keyboard and top cover off without breaking anything. The thing was perfectly clean. I was expecting a big ball of dust or something (see photo). 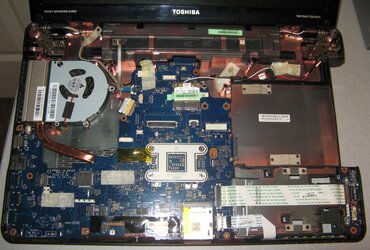 I kept going until I dug up the motherboard. It was held on by only one screw. Tool marks and a screw head almost stripped out suggested it had been disassembled before. I remember Dad told me that once it stopped working and he took it to Geek Squad. I know, right...

I took the heatsink/heatpipe thing off and someone had made a mess with thermal paste. What little was on the core was dried up and just flaked off. I cleaned all the thermal paste up and reapplied the TIM using MX-4. I reinstalled the heatsink and replaced one pad that was missing. There were labels everywhere, one label was stuck across the heatsink blocking fins (I removed it). Once all back together, amazingly enough it worked. Well, all except the speakers, so I had to tear it halfway down again and plug the speaker connector in better (it was loose). That ribbon cable for the keyboard is a little short and was a PITA to unstall.

Temps only hit 80 degrees C. on the same benchmark, so remounting the heatsink improved cooling by 10 degrees. Oddly, performance stayed low even though temps were greatly improved. 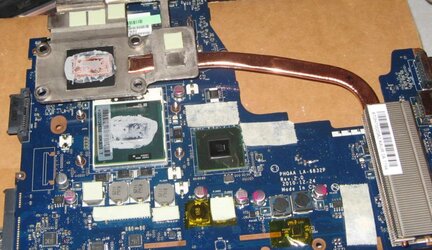 I noticed mismatched RAM. One stick was a 4GB Samsung module and the other was a no name 2GB module. I ordered 2X4GB Samsung 9-9-9-24 DDR3 RAM and now have it installed (8GB is the most this laptop supports). I spent most of a day installing 60 updates (computer had not been on for 2 years) and optimizing Windows 7 64-bit. Performance increased dramatically. Here are the before and after results compared to my older laptop and watercooled desktop.

Bud, you're covered!
8GB+SSD is all that those 4 cores need!

Use liquid metal for the die (I am sure you have some spare ).

Look at mine in sig, it boosts [email protected] on all 4 cores/8Threads, and the 2 downsides are 720p panel and 2.5 hours autonomy max. Except from that, it does everything (productivity) I throw at it, from photoshop to encoding.

Edit: and it plays Pacman Championship! My 4yo loves it
OP

Look what I got today: 256GB Samsung 850 EVO SSD and StarTech SATA to USB cable. Samsung has disk cloning software included. I have my important files backed up to a DVD-R and a flash drive. I'm ready to dump this HDD for a fast and quiet SSD. I'll post back later with a progress report. 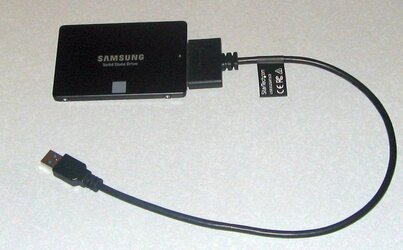 That was easy. The Samsung Data Migration program made the swap painless. You install the software that is provided with the Samsung SSD. Then, when prompted, you plug the new SSD into a USB port via the adapter cable. The old HDD was cloned to the new SSD. When it was done, you swap drives (see photo). It booted right up, after it goes through some updates. I like how it feels so much snappier. Reboots are fast. Very nice. Now I see why people say installing a SSD is the best upgrade you can get. I'll add RAM too, that was what really gave me the most performance gain. 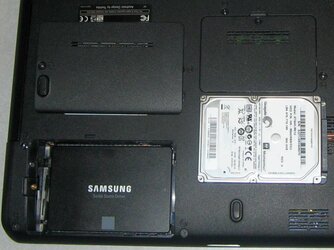 Yep, apart from gaming, and if you use the machine for office/media/light prod, enough RAM and a SSD makes a laptop feels snapier, faster and smoother than any 84 cores rig with a HDD! Even if it is 6 years old...

If you have time, replace the TIM with liquid metal: the +/-15c drop in temps will allow for 27/7 max boost. And it makes a big difference!
OP

When I remounted the heatsink, I thought about doing liquid metal. Sentential wanted me to do it too. I decided not to go hardcore with this laptop, especially since I can't overclock. That's why I settled for the MX-4 thermal paste. Besides, this is sort of a family heirloom computer.

I found out that this model had optional graphics (NVidia GT 540 M). Not many of these were made compared to the standard version like the one I got. Looking at 3D game benchmarks, the optional graphics score twice as much as the standard. If I did run across a reasonably priced motherboard with the optional graphics, I'd be tempted to pick it up. So far, all I've found for a decent price have to be shipped from China. The few ebay folks in the USA that have them, must think they're made of gold or something.

I ordered a power supply brick/cord. That's something that sometimes goes bad, so I decided to get a spare now while I had a chance. Who knows, maybe a year from now when I need one, they might not be available anymore.

Good job on the refurb. The SSD is the biggest improvement, but I'm sure getting the memory matched went a long way as well.

Not sure if ThrottleStop is compatible with the newer Intel CPUs but you could give it a shot. This would allow you to maximize CPU performance and undervolt as well to mitigate heat. You can set AC/Battery profiles and use Windows Task Scheduler to force an automatic start when you log into windows. Might be worth a shot.
You must log in or register to reply here.

Laptop stuck at the logo screen, no matter what...

Windows 11 - Printing Is Cut Off