Hi all,
I've been trying to reassign my orange, black and grey audio jacks as Line in and Mic In jacks for streaming. I found a tutorial online which seems to kinda work, but I've got a bit stuck.
Tutorial Link

Okay so I've got the orange jack working as a Line In (Aux) jack, but for some reason the new black and grey mic jacks just won't behave themselves.

Here's where it gets interesting though

So that's about it, heres some pictures which hopefully explain the situation better than I can;

Here's my current values for RegEdit, which seem to be correct AFAIK 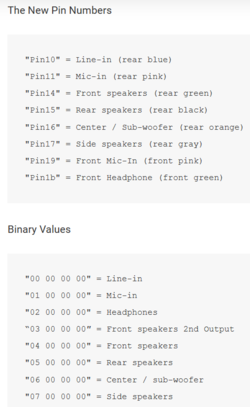 So these both seem to be identifying as Keyboard Mic, if I rename one the other gets renamed too and they both open the same tab in Realtek Audio Manager

If you've read this far, you'll probably want to know the usual stuff, so here it is:
MB: Gigabyte 990FXA UD3 R5
Drivers: Realtek 6.0.1.7553 (Gigabyte rebranded version from the disk. I tried installing the standard Realtek ones ages ago but Win10 kept replacing them)
Also maybe worth mentioning I'm running all audio directly from the motherboard, I've completely disabled HDMI audio from within nVidia control panel

So I'm pretty much stumped at this point. Maybe it just plain isn't possible cause of the PCB design or something?

Anyway, any help is really appreciated

My best guess is the orange is a versajack, able to send and receive. The other output jacks are not (send only).

What are you trying to accomplish? Maybe I can help with a different solution...
OP
A

@Pinky, Interesting thought about the orange jack having a different design. I might try setting that one as a Mic In and see what happens there, I was also going to try with only one extra mic jack (either black or grey instead of both) and see if thats causing the driver issues.

All I really want to do is add an extra couple of input jacks for Mic and Aux without shelling out for a sound card, as well as an opportunity to mess with hidden settings and break stuff

If all you need is an extra mic input you could go with a usb audio adapter, a usb mic, or get a cheap mixer.

If you want to tinker, then carry on.
OP
A

Okay so I was playing around some more and think I figured out the problem, the surround jacks are somehow wired very differently. First I tried disabling one of them so only the pink and grey jacks were microphones, no luck. I decided to try a different mic just to be sure, so I plugged my headphones in (which use a single, 4 band jack for sound and mic) and voila, it picked up sound.

Now here's the really wierd part; it's somehow picking up sound from inside the left speaker cup instead of the mic itself. I don't just mean it picks up whats playing on the left speaker, I mean if I physically tap the speaker I can hear it though the computer. I'm not even sure how thats possible :/

Anyway, now I'm thinking about making some kind of adapter to change the order of the bands so it picks up the right one... (I know I could get a USB adapter for less than I'll spend making one, but where's the fun in that!)
Last edited: Oct 4, 2016

Speakers can be used as mics. Many years ago I had a set of heaphones I would wear and record live shows on a minidisc recorder. Ghetto ninja concert recording.
You must log in or register to reply here.

Bluetooth headset, Mic or Sound works but not at the same time

Adding Bluetooth to a TV or Reciever without it.