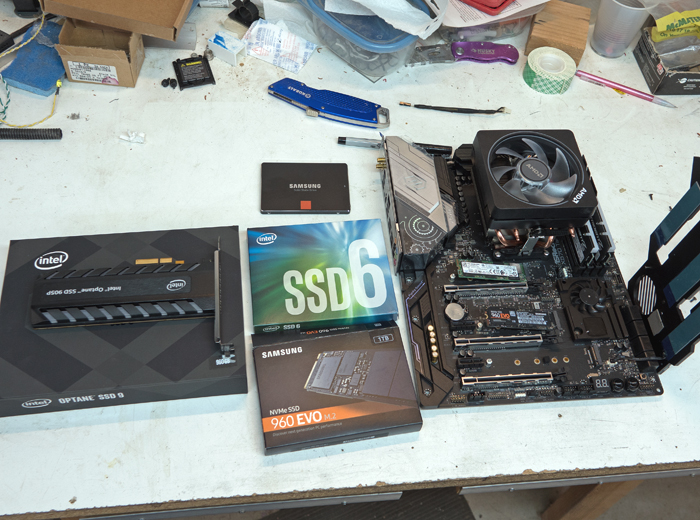 Next update was a major move.

I migrated to AMD!

Honestly, I was happy with the cpu performance of my 3770k. But I was quite excited by the prospect of PCIe 4.0 and faster hard drives. I do a lot of photo editing. Plus current systems, (excluding video card performance for games), I think the rate limiting step is hard drive performance.

So I decided to jump in to the X570 chipset.

You may remember that when Ryzen 9 was first released, it was so in demand, the cpu was never in stock (just a minor prelude to the coming Covid storm/Ethereum mining PC hardware fiasco to come). But I managed to score one off ebay a couple months after release at about MSRP + $80.

As I mentioned, storage was the primary focus for this upgrade, so for my motherboard I opted for a Asrock X570 Taichi. This has a lot of flexibility--ie 3 M.2 slots and multiple SATA ports.

For my Ram I picked up 2x16gb G.skill Â“Samsung B-DiesÂ”.

And for storage, if you look at my pic, you may see the pink elephant: I picked up a 960gb Intel Optane 905p drive. At the time I was willing to splurge the large amount of money for the low latency random access. Almost unbelievably, 2 years later now, it still reigns king for an OS drive. Plus its endurance is essentially infinity (big deal given the current starting craze for Chia farming).

So, off of the station with my de-lidded 3770k and Asus Maximus motherboard.

And on to the station went my new Asrock X570 Taichi and Ryzen 9 3900X. I started out with the original Wraith cooler, just to get it up and running. 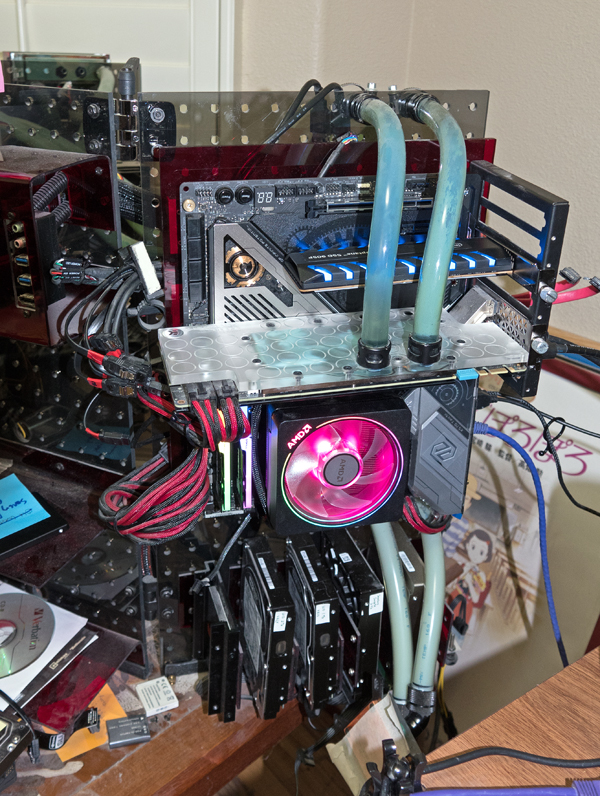 Once it was stable, up and running, it was time to get it watercooled.

Off with the system and the EK cpu block 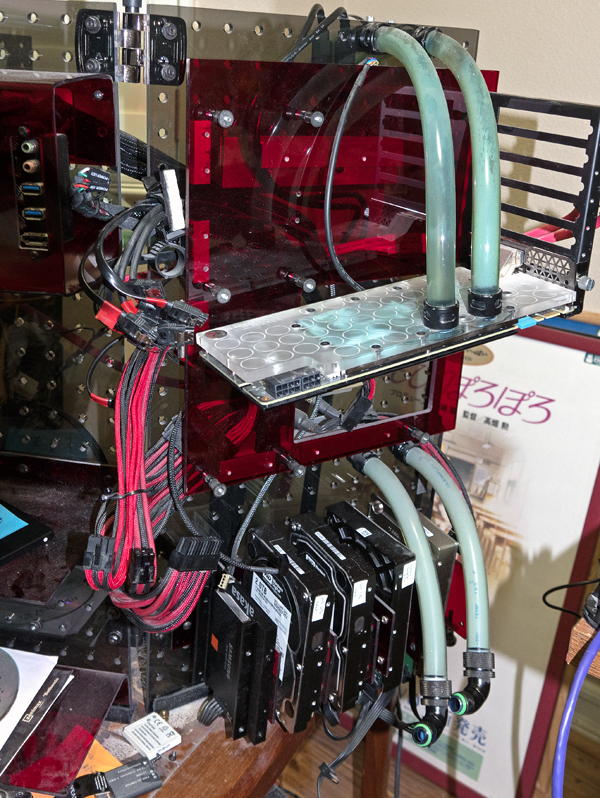 You may remember, that draining my system is as easy as sticking a tupperware under my drain port, opening the drain, and cracking the airseal by opening up the reservoir. Next I needed to convert my waterblock from Intel LGA 1155 to AM4, kit from EK. 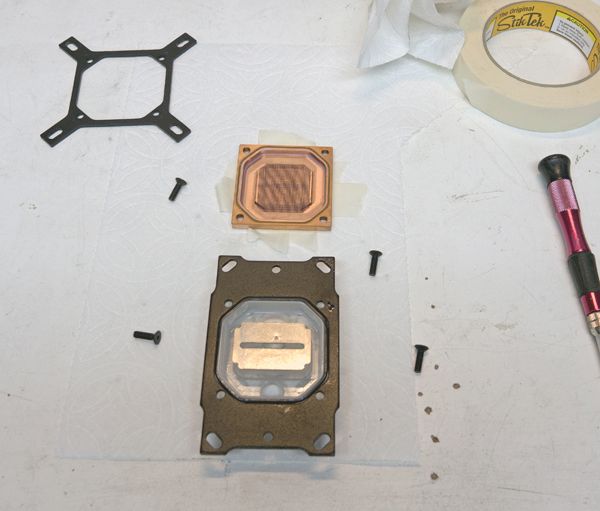 Prepped the motherboard, using Noctua NT-1 as my TIM. 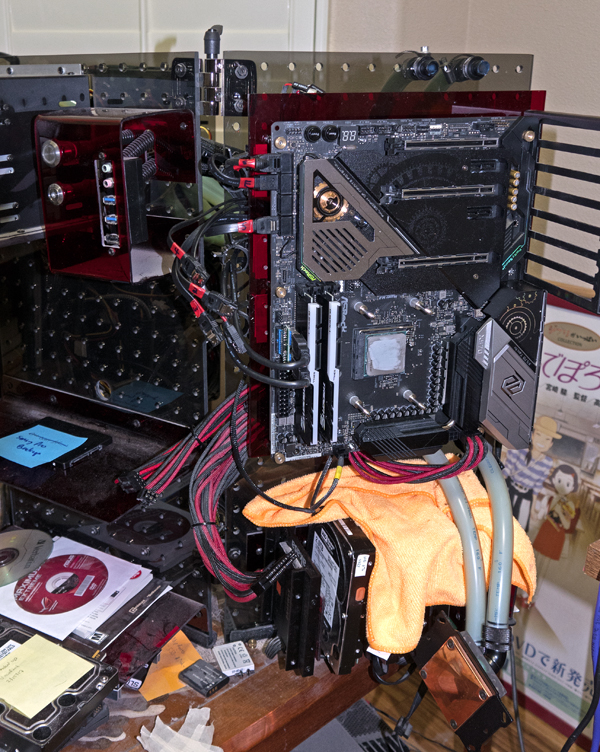 And the cpu was ready to go, after leak testing: 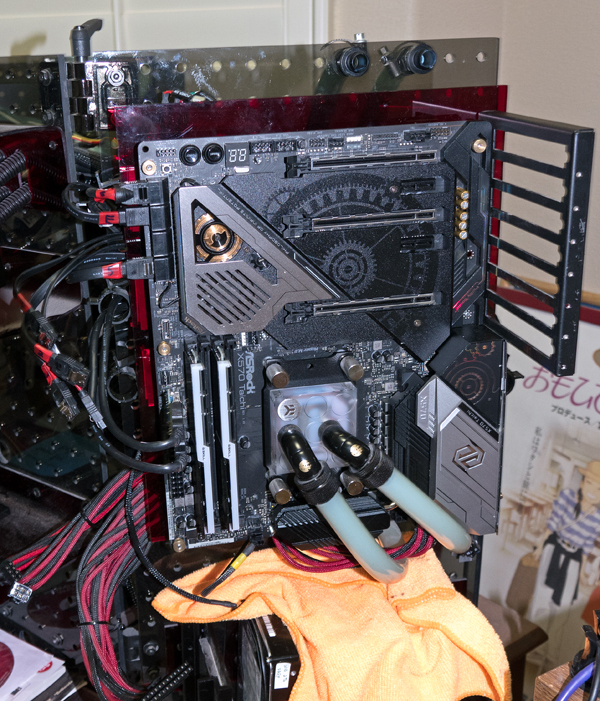 Sorry for the long delay in posts. As I will detail in the future, I've had a catastrophic PC failure, kind of worse case scenario, corrupting my OS drive. And this is my main personal system, specifically where I edit all my photos! I went so far down the rabbit hole, having to systematically replace and change just about everything. Turns out my motherboard (probably southbridge) failed, corrupting my OS drive, followed by a brand new replacement mobo also being defective, finally stabilized with the replacement of the replacement! More posts to come....
OP

Ok, I am back! Got the whole system back up and running. I will post more info when I catch this thread up to date.

Time to continue the previous train of thought.

Got my system up and running with my lovely 3900X on a Asrock Z570 Taichi.

Since the emphasis for this upgrade was storage, I found myself with a stack of various types of hard drives.

So I went ahead and did some basic hard drive testing on all these drives, PLUS the Samsung 840pros in Raid 0.


Here were my results: 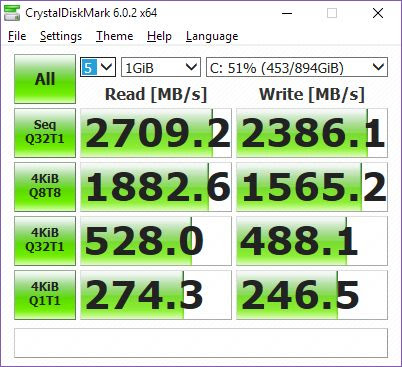 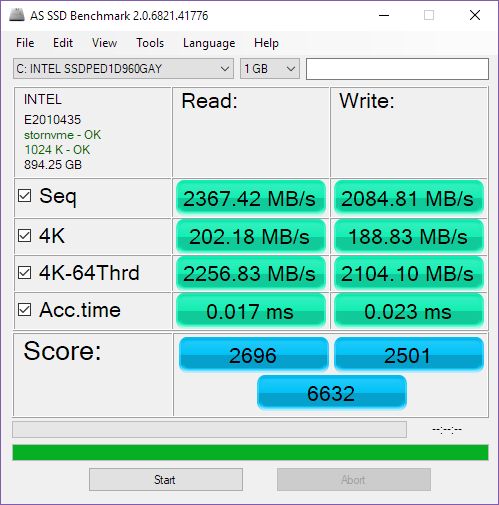 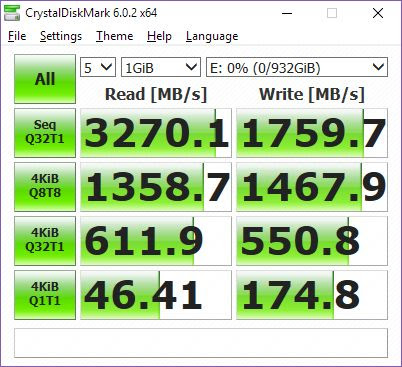 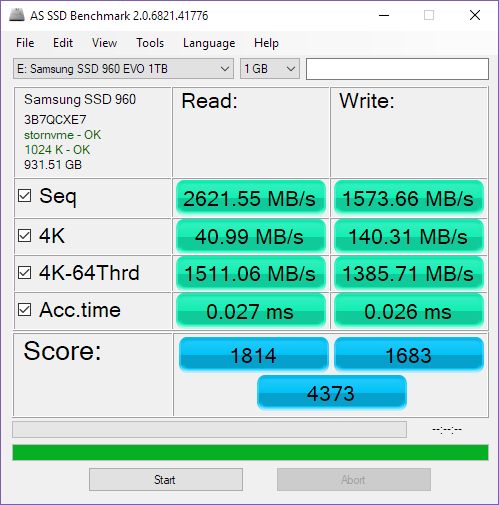 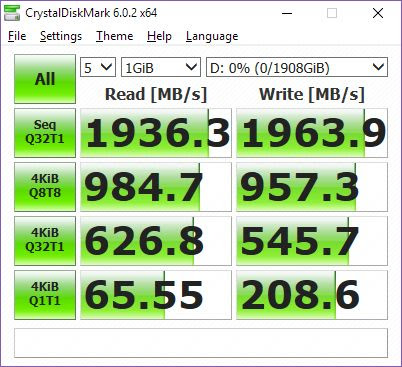 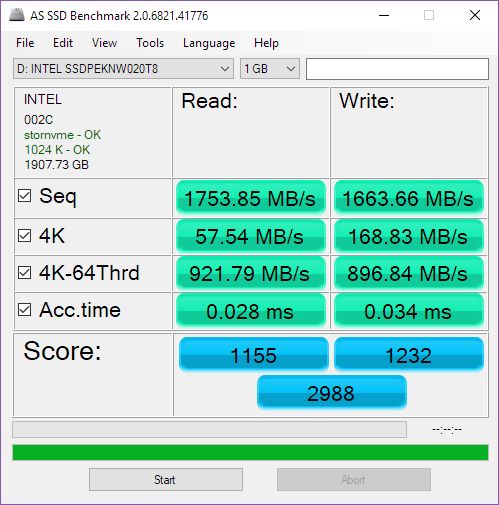 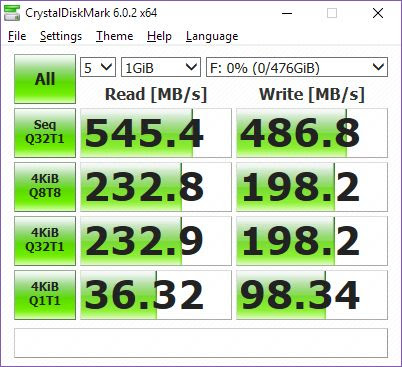 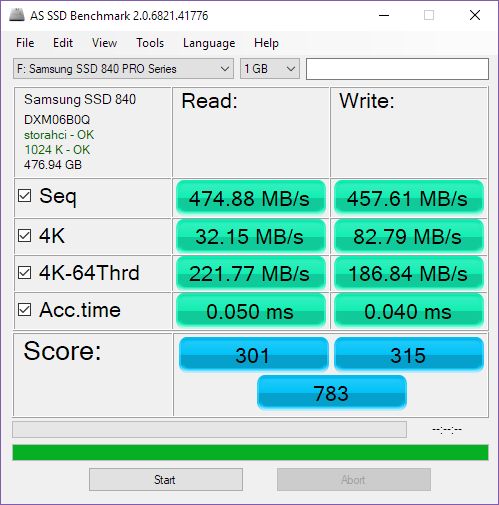 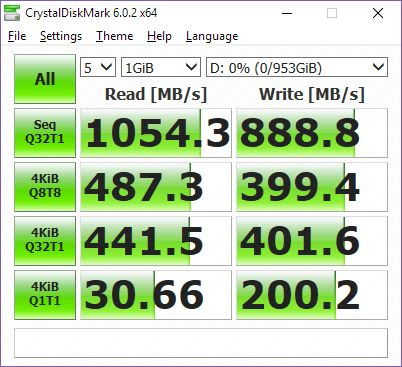 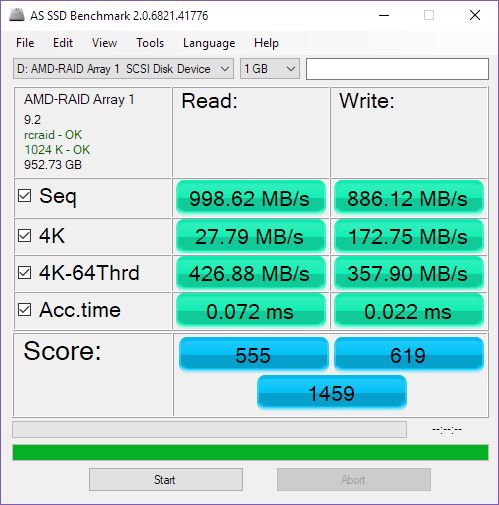 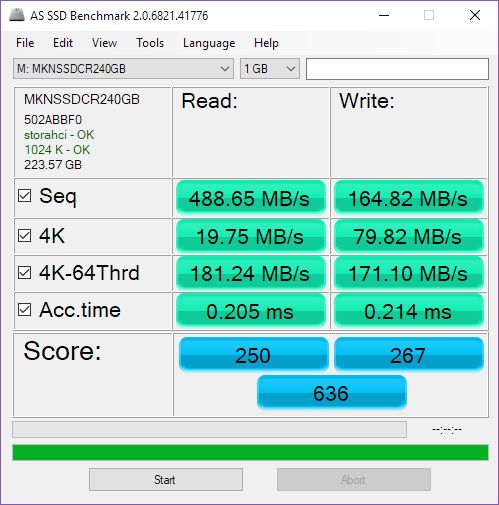 Lost my screencap of the Chronos and Crystalmark. 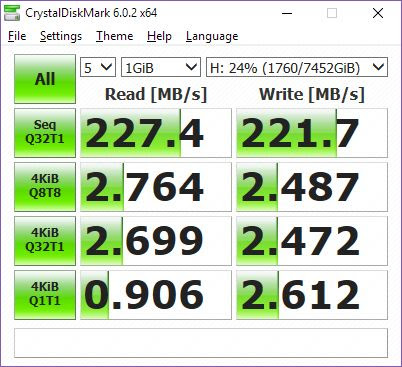 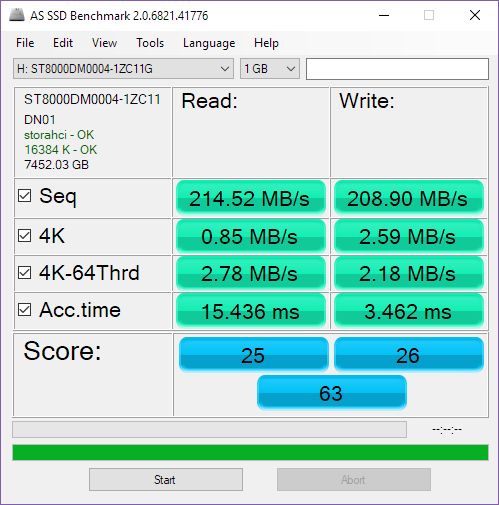 No real surprises in my tests. Here were my conclusions:

Can squeeze more performance from RAID 0 (not quite 2x tho), but doesnÂ’t quite match up to the performance of the next generation of technology.

This was my system for the next 2 years. Fully satisfied, great for anything I threw at it.


Until the Asrock Taichi X570 fan started to grind...I tried to troubleshoot it, even mod replace it. But, while 60mm in diameter, it is flatter (maybe 7 mm) than standard fans. I contacted Asrock and they indicated they were out of replacement fans. 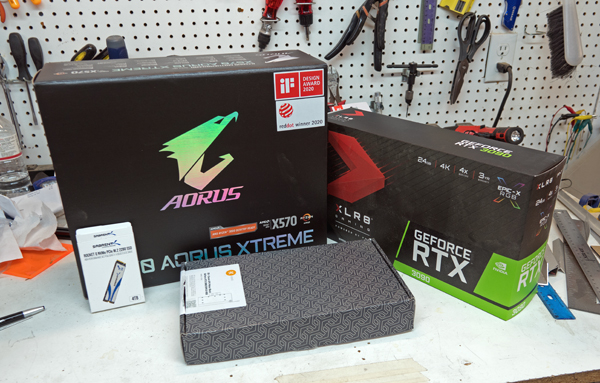 So, I decided to go fanless. At the time, best high end option:


At the same time, I actually managed to score a PNY RTX 3090 for MSRP! This was a triumph. Heck it is now some 7 months later, and you still barely get one at all. I registered for notification at B&H--it came in to stock once and I missed it. At the time B&H had a thing where after missing it once, you would get a priority notification. I happened to be on at a random night around midnight and actually saw the email notification pop up in my in basket. So I immediately clicked over to B&H and lo and behold it was in stock. So I added it to my cart and successfully paid for it. Next day I actually got a shipping notification. I really couldnÂ’t believe it till I had picked it up from Fedex, opened it, and confirmed it. Still canÂ’t believe I have this card.

Additional upgrade--for the sake of speed of photoediting, I upgraded my photo storage drive to a Rocket 4Tb NVME. By no means the fastest NVME, but inexpensive for 4Tb. And as my previous research indicated, stepping up from a mechanical drive to NVME is an enormous 2 step up that really eclipses the minor differences between NVME drives, especially for a non-OS drive.
OP

Here I started prepping the motherboard.

The OS drive will be my PCIe Intel 905p. 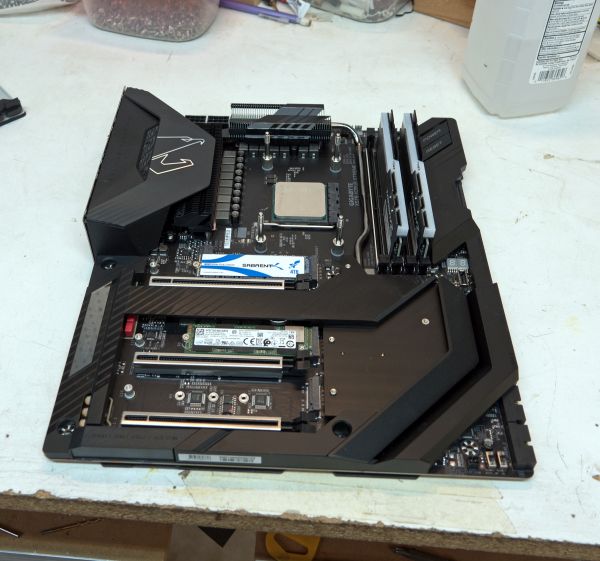 And mounted up into the Vertical Station: 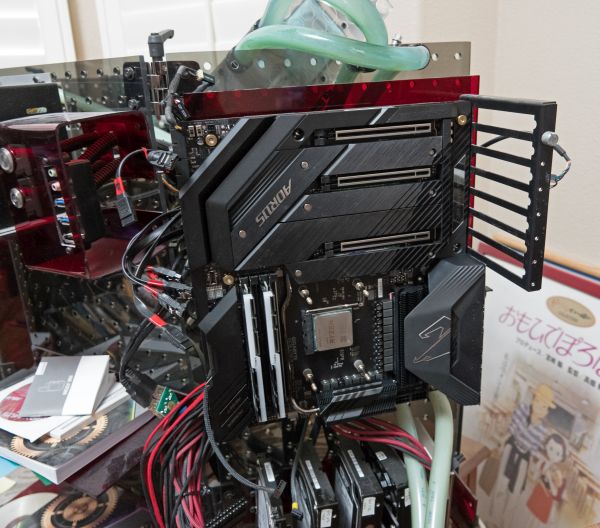 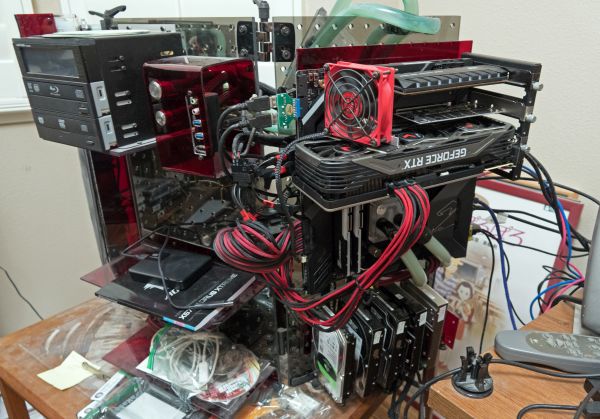 I was testing out different configurations of drives, with an add-in NVME PCIe card. I noticed that my PCIe drives were running hot, so I add an extra fan to blow across them.

Post magically merged: Feb 23, 2022
It was here that I started to run in to catastrophic problems.

Subtle reboots at first. Then full on crazy failure, unable to boot even in to safe-mode level problems.

First, I Memtested the RAM pre-OS, and it had no problems whatsoever.

Thankfully, during this semi-stable state, I successfully cloned my OS drive to a Samsung 980 pro 1TB NVME (in the add-in card pictured above). Honestly, I thought my 905p was having problems, so I cloned it over to a more standard NVME drive, but same thing.

Then I thought, must be the motherboard. So I purchased a second Aorus Xtreme--and got the same problems! WTF!?!

So then I started to question my CPU and my Powersupply. I had a chance at a MSRP 5950X, so I went ahead and purchased that, and swapped in a Corsair RM1000i that I had for future builds

I then switched back to my noisy Asrock X570 Taichi, and had zero problems.

At this point, my first Auros Xtreme returned to me from RMA, so I ever so hesitantly re-installed my hardware--and from then on, no problems at all.

As far as I can tell, I managed to get 2 Auros Xtremes with faulty southbridges, thus corrupting my drives maybe?

Anyways, after months of troubleshooting, I finally had a stable setup!

So, here is my new lineup of hardware, which I know is just pretty darn awesome:

Very nice Navig; congrats on the new build! "Pretty darn awesome," is most certainly an understatement.

Dang Navig, that new build is indeed; "Pretty darn awesome"! Congrats!!
You must log in or register to reply here.

ARGB header too close to USB