Watercooling with an outdoor radiator

This is my first post on Overclockers.com and I wanted to use it to share with you a project I have recently completed. Last year I upgraded my system to a 770GTX graphics card, Asus X99 motherboard with 16GB of crucial ballistix memory and an I7 5820K CPU. Previously I'd been running an AMD B55 with 4 unlocked cores and a Radeon 5770 which was cooled via my old and robust koolance Exos. After upgrading and plumbing in the new GPU and CPU into the Koolance it struggled with keeping the GPU temperatures below 65-70 degrees C and the CPU below 55 degress C. The coolant would often reach 55 degrees during gaming which revved up the fans and made for a pretty big distraction, it also ended up with me soon having the warmest room in the house! I decided enough was enough and I need a new cooling solution. I decided to keep the internal plumbing the same and just relocate the external disconnects from the Koolance back plate to some pre cut holes. I also decided that I wanted absolute silence and no extra heat in the room. So the dicission was made to mount the radiator outside. Below is a list of the cooling components I used for the project:

This was pretty much it from a watercooling parts perspective. Next I got the wifes permission to drill 2 20mm holes in the wall and began.

I bought an IP55 rated electric junction box, drilled some mounting holes in the front and cut out an appature before mounting the radiator. The fans were IP56 rated and probably the best I could find for use outdoor. I don't expect them to get wet as they are inside the case and there will be a vent mounted to the front eventually. I also mounted the fan splitter in the box and drilled a total of 9 25mm holes along the bottom and sides of the box and covered them with mesh to act as exhaust for the warm air. 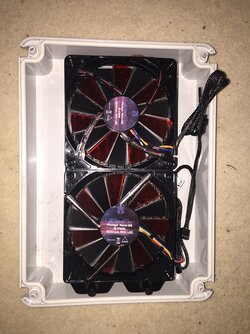 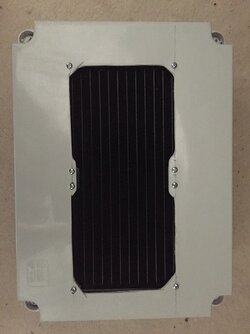 I decided the pump/res would be mounted in side so I was passing a little as possible through the wall. In the end I had just 2 16mm tubes and a single 4 ping fan cable going through the wall. I also wanted the inside fittings and attachements to look nice rather than 2 holes and a bunch of fittings badly screwed to the wall. So I bought an off cut of carbon fibre and a 20mm diamond hole cutter (£5.95 from Amazon!) and went about mounting the interior parts. 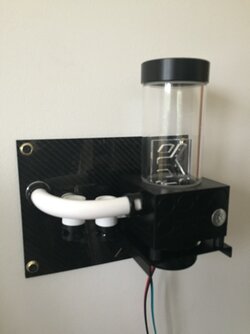 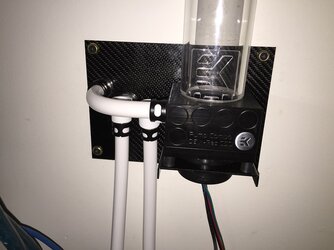 I setup the pump out put to go straight to the PC, this way any liquid left in the radiator over night and potentially very cold would first be pumped into the reservoir which had room temperature water, and therefore minimise and possibility of start up condensation on inter parts.

Here is the finished item all filled, bled and working: 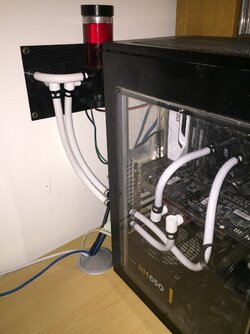 The wires are for pump power, fan power and a speed signal to the pump. I plan on tidying these up into a single heat shield wrapped cable. The pump speed signal and fan both connect to the X99 motherboard fan connectors which are able to control their speed in relation to the CPU temp. So far over all temperatures of the GPU and CPU have dropped by up to 20 degrees and peak at around 45 for the CPU and 50 whilst gaming. The radiator box outside never catches the sun and will always have a source of air cooler than the air in the room which my Koolance Exos was using and in turn heating.

In terms of condensation there hasn't been any, and the last week or so have been cold! The cold is not transferred along the pipes to the inside when it is turned off and the heat load from the computer keeps the coolant above room temperature during operation. I also specifically went for a coolant that wouldn't freeze until reaching -17 degrees C.

All in all I'm very pleased. I'd googled outdoor radiators previously as I researched my project but whilst there were plenty of people with opinions fore and against there were none who had actually done it. The system is absolutely silent during normal work load with a slight hum from the pump during gaming, but that is covered by the games sound! I'll get some pictures of the radiator finally mounted outdoor. Given the width of my path down the side of the house and the hight of the box from the ground it was quite an undertaking as the ladder ended up at 80 degrees! I'm also planning to upgrade my case, hence the lack of work to find clean routing for the power and signal wires
Last edited: Jan 30, 2015

I'm in the UK so summer temperatures don't get that high. Because we don't have AC in the UK much internal and external temperatures are pretty much the same.

Even with a big radiator indoors I'd still be venting the same amount of heat energy into the room which the radiator would then be using to cool the coolant over and over. By mounting outside I don't have that issue. Plus it is deathly silent

Those temps are your only saving grace with such a small radiator for your heatload. I can't beleive you drilled through your house instead of buying another radiator! LOL!

Be careful of condensation as it just won't happen on startup. If anything inside is below the dewpoint, you will get it.

Regardless, thanks for sharing!

Looking good, but definitely get some insulation to avoid condensation.
Ask Mandrake or Johan on here about hanging radiators out in the cold
OP
B

I've had my infrared thermometer on most of the parts, nothing gets anywhere near the temperatures I'd need for condensation when the PC is running or at start up.

I connected the inlet and outlet together to remove the PC heat source from the system and ran it over night a few times. I managed to get some condensation on the quick disconnects but that was it. I've also placed an inline temperature sensor on the inlet which is used to vary the speed of the fan and pump, if the temp of the coolant gets too low I have the fans slow down /turn off and the pump slow.

I've got plans to be able to daisy chain another radiator into the loop out side in a second box if it begins to struggle.

Love it but be careful if you get a really cold day outside. I hang my radiator out my window as Atmin said for benching purposes and have had my Cpu block frost up and then thaw into the Cpu socket. You may want to put dielectric grease in the socket to help and also surround the cpu socket with shop towels.

Thanks for sharing your project. Really impressive I must say and nice and clean.

I will say, you need to watch for condensation as well. As everyone has already said, as I was reading your post, that's the first thing that came to my head. It ONLY needs to happen once. Getting it on your QDC is just a sign. I would take the necessary steps to condensate proof your setup as other members at our fine forum have with theirs. Regardless, I really like what you did here.
OP
B

Thanks for all the feedback. I may place a moisture sensor on the back of the reservoir as that's probably the first place I'll get condensation given its the first place that receives the externally cooled coolant and has no heat source . It wouldn't take much to have it trip an alarm or power off the PC

Mandrake, out of interest what size radiator are you placing outside and what kind of temperatures is the outside air?

I use my Thermochill Pa 120.3 its a triple 120mm, with a 700 Gph pump and 2 gallons of 50/50 Antifreeze/Distilled Water. My water temps will usually around +2-3 c above the outside air temps. This all depends on the chip I'm running and also how much voltage I'm pushing. The lowest temps I've seen are around -15c again all depending on the outside air here in NY. Tonight it's supposed to be around -9c here in Ny so I should be able to bench with around -6 to -7 degree water.
OP
B

So, a quick update. I've been playing with the pump and fan speed profiles the last few days and I've managed to setup a profile which sees the coolant stay around 22 degrees C even under load. The CPU and GPU rarely get above 40 degrees, pretty happy as the aim was to have silence not super cool. Only down side is I had to turn the radiator on in my office the other day because I was getting cold

I love the idea of this and thought of it right before joining these forums today sweet job. Im moving back to texas and was thinking since this type of cooling wouldnt work for me all year round i may buy a dedicated mini fridge and drill 2 holes and put my radiator in a bowl of water and just let it freeze and use antifreeze. As far as getting condensation enough fans and finding the temperature point of the starting condensation and lowering the mini fridges temp seems like a plausible idea. Anyone ever done this?

Mini fridges don't work.. they can't keep temps down. They are made to cool and shut off, not constantly run. As we said throughout, any temps below the dew point will cause condensation.

In short, not a good idea for a daily driver.

EarthDog said:
Mini fridges don't work.. they can't keep temps down. They are made to cool and shut off, not constantly run. As we said throughout, any temps below the dew point will cause condensation.

In short, not a good idea for a daily driver.
Click to expand...

Johan has a very large freezer he uses to bench with and even that can only hold temps down for a little while, then it gets too hot. He also has everything insulated for condensation.
B

you could take the minifridge apart and use the peltier units it most likely uses to cool your system.

the minifridge uses fairly small passive units to cool the peltiers usually and also cycles power on and off. a robust power supply could maintain current to the peltiers and a decent cooler can keep the hot side at a more than reasonable temp.
You must log in or register to reply here.

Tuesday at 7:24 AM
EarthDog

M
Pump all I need?